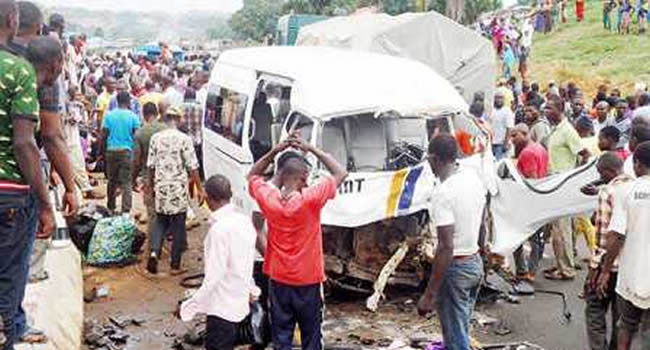 Not less than three persons, including a pregnant woman, have died in an early morning multiple auto crash on the Ogun State corridor of the Lagos – Ibadan expressway.

The accident, which happened around 4:30 am at the Danco – Ibafo stretch of the expressway, involved about four vehicles.

According to eyewitnesses, the driver of the Mazda bus carrying sacks of garri and about nine passengers lost control and rammed into a truck from the rear, triggering multiple hits by other vehicles.

READ ALSO: Architect jailed one month for impersonation in Ogun

Speaking on the incident spokesperson, Ogun State Traffic Compliance and Enforcement Corps (TRACE) Babatunde Akinbiyi, who confirmed the accident, said remains of the deceased were taken to the morgue of Idera Hospital, a private health facility in Sagamu, by FRSC operatives.

While commiserating with families of the dead, Akinbiyi cautioned motorists to desist from overspeeding, especially when the roads are wet.