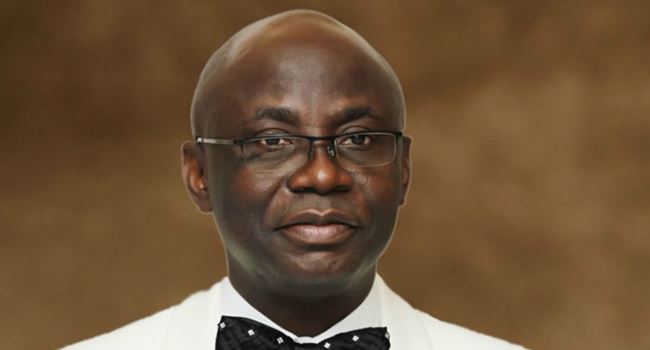 To the vast majority of members of his Latter Rain Assembly and a number of members of his captive audience outside his church, Pastor Tunde Bakare, is perhaps the John the Baptist of our time. Like the ascetic frontrunner who through his powerful, fiery and uncompromising messages calling the people to repentance from sin in preparation for the coming of the Messiah, Pastor Bakare does not flinch from boldly speaking what he believes as truth to power. This has won him considerable admiration both within his church and beyond. However, in recent times the pastor comes across more like a modern day John the Baptist whose sermons, rather than tailored to the salvation of souls and preparing adherents of his church for the second coming of the Messiah, is to prepare the route for the emergence of Pastor Bakare as President Tunde Bakare, the envisaged elected political Messiah of Nigeria.

Preaching the word of God from the pulpit as an oracle of God is one of the greatest responsibilities that any cleric can be called upon to shoulder. It is a privilege and an opportunity that calls for considerable restraint and a great sense of responsibility by anybody that has been given the divine mandate to speak for God among men. It is so easy to embarrass God when the focus of the priest is more on partisan politics than on preaching the gospel of salvation through faith in Christ. Shortly after he emerged as President-elect in 1999, for instance, Pastor Bakare prophesied with pastoral authority and finality that General Obasanjo would not be sworn in as President. There was panic in the land. Would there be a coup? Would the president elect die before the swearing in date?

That would have been a tragedy of gargantuan proportions for a country just coming out of the throes of the June 12 struggles. But nothing of the sort happened. Not only was Obasanjo sworn in as President, he spent eight years in office. This must have been thoroughly embarrassing not only to the God in whose name Pastor Bakare prophesies but to the eloquent man of God himself. During the late President Umaru Yar’Adua’s prolonged absence from the country due to illness, Pastor Bakare was at the forefront of the Save Nigeria Group, which ran aggressive campaigns, including public demonstrations to ensure that the needful was done and then Vice-President Goodluck Jonathan declared Acting President. Not a few people commended the role of Pastor Bakare in that struggle.

After severally excoriating President Muhammadu Buhari even once describing him derisively as ‘the long one’ obviously referring to Buhari’s slim and tall frame, Bakare agreed to be Buhari’s running mate on the platform of the Congress for Progressive Change (CPC) for the 2011 presidential election. Of course, the catastrophic outcome of that adventure is too well known to detain us here. Once more, Pastor Bakare has declared with magisterial finality, again from the pulpit, that he has been ordained to be the country’s president after Buhari. Is this again a revelation from God after the Obasanjo prophesy debacle saga? Is it not possible that an undue familiarity with God, consciously or unconsciously, can cause a man of God to cavalierly make proclamations in the name of God that has no bearing with the mind of the Lord?

Shortly after making public God’s revelation to him that he is destined to be President after Buhari, Bakare decided to unleash a vitriolic attack on a National leader of the All Progressives Congress (APC), Asiwaju Bola Ahmed Tinubu, again from the assumed moral high ground of his pulpit. Although he did not mention Tinubu by name, his innuendo was clear. Let me quote an excerpt from Bakare’s ‘sermon’ in question: “The foolish person would no longer be called generous. You can say ‘so so and so’ has stolen all the money in the state, but he is a very generous man, you are foolish. That’s why potholes are killing you…you can’t drive now anymore because what is meant for road use has been stolen since democracy began, they are living larger than life having jets here, having jets there, having house in Bourdillon, having house in this place, having house in that place, having house in every place at the expense of the public. And you will not go without vomiting what you have stolen. Wait and see. Because a king will rein in righteousness and princes will rule in justice. Unfortunately, Nigerian people, you celebrate your villains and crucify your heroes”.

What can one make of this litany of mischievous innuendoes, manipulative suggestions and baseless insinuations? Must the pulpit of God, presumably sacred and holy, become the spiritual equivalent of social media gossip and bold faced mudslinging? Does this not diminish God and his church? Pastor Bakare is a lawyer and a brilliant man. Can he not carry out his investigations and forward a petition to the anti-corruption agencies if anyone had amassed wealth and he has credible evidence? Is it a crime to be wealthy or to own houses and jets if one can afford it? If assets have been amassed in a criminal manner, this must be investigated and whoever is found guilty made to face the sanctions of the law. Pastor Bakare’s pulpit cannot be an alternative to the courts of law. He cannot utilize his pulpit as a platform that grants him immunity to impugn the characters of others with impunity and without proof. He is a lawyer. He knows this better than this columnist. To paraphrase one of the memorable phrases of the great Gbolabo Ogunsanwo, one of Nigeria’s finest journalists, a pastoral toga should be no magna carta for mandibular wakaabout.

Former President Olusegun Obasanjo, whose administration did everything to frustrate the progress of Lagos under Tinubu as governor between 1999 and 2007, had vowed that Tinubu was going to jail immediately after he left office and thus lost his immunity. Chieftains of the PDP in Lagos echoed the same vengeful view. I can recall that, shortly after he left office, Tinubu was invited to interact with the Economic and Financial Crimes Commission (EFCC) on issues arising during his eight years in office. If my memory serves me right, he was grilled by officers of the EFCC in Abuja from morning till night for not less than four days. The PDP was still in power at the centre. They would have been all too glad to skewer Tinubu if they had found anything incriminating against him.

Oh yes, by all means let Pastor Bakare continue his crusades for a better, more just and equitable Nigeria from his pulpit. It is a commendable, patriotic and courageous enterprise. But this cannot be a substitute for his infinitely far more critical assignment of preaching Christ’s message of salvation to a spiritually starving and dying world. Even more importantly, since Bakare has announced that he has been ordained by God to be Buhari’s successor, he should honorably quit the pulpit and plunge fully into politics so that his pronouncements from the pulpit will not be perceived as being motivated by his political ambition rather than the spirit of God. Surely, it cannot be that God wants to unilaterally pronounce him as President in 2023 without campaigns, without political parties, without sweat. But then, let us wait and see.

Only recently someone sent me a clip of a sermon by Reverend Father George Ehusani of the Catholic Church on WhatsApp. It is, for me, a masterly example of a blend of the spiritual with sound and detached social and political analysis. In his words, “One of the things we really lack in this society is what I call critical social analysis. We don’t do good social analysis. And we really need training in social analysis exactly what those guys did in South Africa because they don’t do critical social analysis. But what they lack, we also lack because when we are suffering the cumulative effects of a small class of people that have destroyed this country, what do we do, we look at the other tribe as responsible. We look at people of the other religion as responsible, true or false? No social analysis. And all leaders of thought should constantly call their people together and let them know, teach them those who have put us in this mess. Those who have put us in this mess, they come from north and south and East and West and Igbo and Hausa and Yoruba and Tiv and Jukun all over”.

Reverend Ehusani continued: “Recently a list was released of those who owe the government over 5 trillion Naira, AMCON. Right, some of you saw it. Where do they come from? From north and south and east and west. N5.3 trillion, that is the equivalent to one year’s budget of Nigeria and how many of them? About 20 Nigerians. Tomorrow, you will come and tell me that it is one part of the country that has put us here. We really need serious social analysis. Why are we where we are? We are all oppressed in this country”.

I feel like quoting this most illuminating sermon by Reverend Ehusani in full but for lack of space. That is a very responsible way of utilizing the pulpit to educate the people politically and enable them to know the underlying character of society beyond superficialities. No name-calling. No self-righteous posturing. A sermon elevated above political partisanship even though profoundly political. That is the way priests should go when pontificating on politics from their exalted pulpits.

Related Topics:politicsPriestsPriests and politics
Up Next