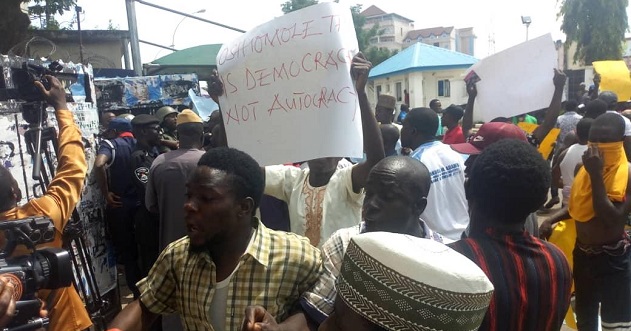 Ugly news has continued to trail the primaries of the All Progressives Congress (APC) for the 2019 general elections across the states of the federation and the Federal Capital Territory (FCT).

On Monday the party’s national secretariat in Abuja was flooded with protesters from Kano, Nasarawa, Niger, Jigawa and Enugu states, all accusing the APC of imposition of candidates during the primaries.

Protesters from some of the states who spoke with newsmen expressed strong anger over the manner of imposition of candidates by the party’s leadership.

A set of the protesters from Enugu State under the aegis of Awareness for Good Leadership, Peace and Development, who staged a peaceful protest in front of the party’s national secretariat, decried alleged malpractices that marred the conduct of the exercise in Awgu South constituency of Enugu South.

They protested the return ticket given to the senator representing Kano South Senatorial District, Kabiru Gaya.

The APC had declared Gaya the winner of the primary election conducted across the 16 local governments and 171 wards of the senatorial zone.

Muhammad Awwal Kofa, who led the aggrieved protesters from that state, said, “The primary election in Kano State was not conducted by the electoral panel sent by the national headquarters and the result was not announced by the appropriate official legally.

“The election was rigged and a false result was announced. This election process was entirely in contravention of our party’s guidelines and constitution.”

A former Inspector-General of Police, Suleiman Abba, who lost out in the scramble for senatorial tickets, had also on Monday decried imposition during the primaries and called on God to punish those responsible for such.

The committee chaired by a former Edo State governor, Professor Oserheimen Osunbor, is to address petitions arising from aggrieved members over the outcome of the primaries.

Saraki’s political future in the balance as Senate resumes