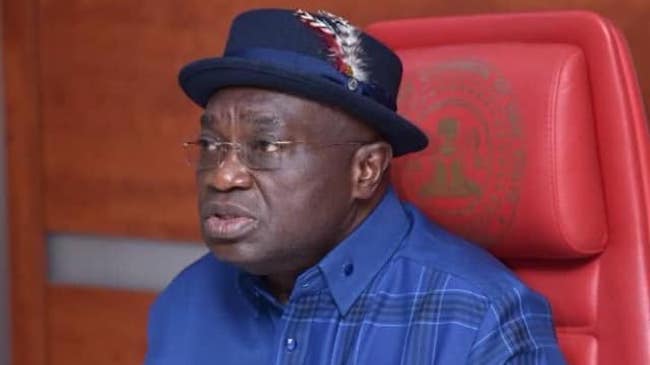 The Buhari Media Organisation (BMO) on Friday charged the Abia State Governor, Okezie Ikpeazu, to take responsibility for the inability of his administration to undertake any meaningful project in the state in the last six years.

The group made the call in a statement issued by its Chairman, Niyi Akinsiju, and Secretary, Cassidy Madueke, respectively.

The BMO added that Governor Ikpeazu’s attempt to shift blame for his inefficiency and incompetence on the Federal Government was surprising.

The statement read: “We find it laughable that Governor Okezie Ikpeazu of Abia has been telling everyone that cared to listen that the federal government is to blame for the infrastructure challenges in his state.

“Indeed, the question that came to our mind is how could the Buhari administration be liable for Abia’s poor infrastructure?

“But even if the claim is true, we fail to see how this could be the reason for the state to be in the condition it has been for years.

”We wonder how that could be a valid reason for the poor state of one of the most important roads in the state, Faulks Road, which incidentally was constructed by the state at N6.8 billion but which has since collapsed and is now impassable.

“So it was not surprising that a former gubernatorial candidate in the state, Alex Otti, recently argued that ‘Umuahia has shown no sign of development, as it has literally remained a glorified village while Aba, the former heartbeat of Igboland, is now wearing a more notorious look, like the headquarters of a refuse dump.”

The group insisted that President Muhammadu Buhari has been good to Abia contrary to claim by Governor Ikpeazu.

It added: “We can easily recall that the Ariaria International Market is the first major market in the country that the President ensured has an Independent Power Plant (IPP) in 2019.

“Interestingly, the road leading to the market is the same Faulks Road the governor spent billions of naira on but which collapsed within a few weeks of its commissioning.

“In fact, we understand that the road leading to his homestead has not been completed, nor Azikiwe or Asa road, yet he wants to hold the federal government responsible for the poor road infrastructure in Abia.

“So we are at a loss as to how a governor would fail to own up to his failures as a result of his reliance on poorly equipped and incompetent contractors, but instead resort to falsehood against the federal government.

“We make bold to say that this is the regular pastime of many governors who believe the best way to stay relevant is to demonize the Buhari administration rather than provide good governance or even pay workers salaries as at when due.”

Related Topics:Ikpeazupro-Buhari group
Up Next

My desire is to bequeath a secured, safe Nigeria for future generations – Buhari