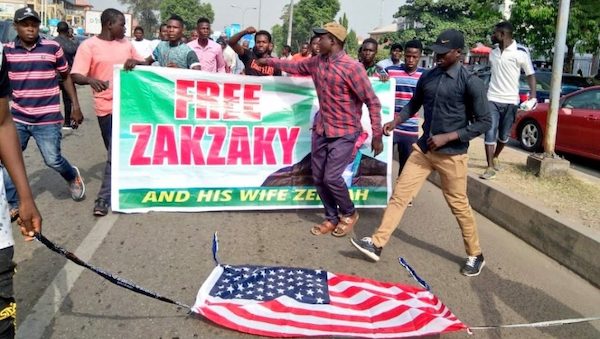 Members of the Islamic Movement in Nigeria (IMN) Monday protested the killing of the Iranian military commander, Qasem Soleimani, in Abuja.

The Shi’ites burnt the United States flag and chanted “Death to America” during the rally.

Soleimani, who was the commander of the elite Quds Force of the Iranian Revolutionary Guards Corps (IRGC), was killed in a US strike on Baghdad’s international airport last Friday.

He was killed on the order of US President, Donald Trump, over alleged plots to attack major American sites.

In their reaction to the killing, the Shi’ites held a rally near Banex junction in Wuse District of the Federal Capital Territory (FCT), Abuja.

READ ALSO: Don’t listen to those who want a northerner to succeed you, group tells Buhari

They also demanded the immediate release of their leader, Sheikh Ibraheem El-Zakzaky and his wife, Zeenat, who are currently in the Department of State Services (DSS) custody.

A top member of the IMN, Sheikh Abdulrahman Abubakar, condemned the killing, saying: “The street demonstration is part of the global outcry against America for the extra judicial killing of Soleimani and others with him.

“These kinds of protests are expected as the funeral rites of those who died commenced in earnest in both Iran and Iraq.”