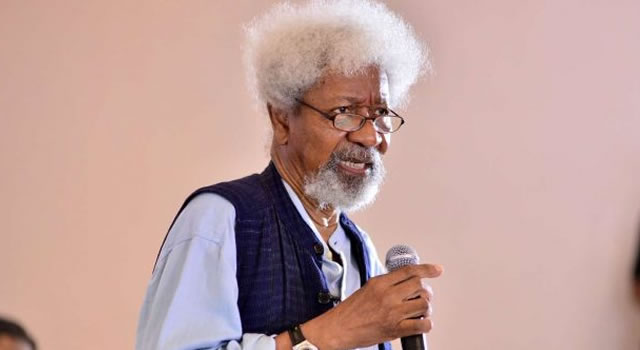 He remains a very good looking gentleman with his unique visage. The silver hair thinning to the point you can see his head and the ever present glasses with his Alibaba and the forty thieves waist coat, he picked a picture of a man who has lived a fulfilled life.

As I looked at him intently, surprised at the energy for a man so far gone in age, I begin to see the need for him to recede out of public glare. He has done his bit and inevitably the system has moved beyond his recycled criticism of government and its operatives.

It was at the Ripples Dialogue, organized by my friends at Ripples Nigeria, that growing multi-media online news platform led by my good friend Sam Ibemere. The dialogue had attracted so much attention, especially with the panellists which included not only the erudite Professor but also had in attendance the increasingly popular Politician, Peter Obi and Pat Utomi who sent a representative.

Professor Soyinka was the keynote speaker and the arrowhead of the event. He did not disappoint the mostly egalitarian crowd but for me and a few, he sounded tired and boring. His stories often retold at so many a gathering but now losing the edge that is required for a putative insurgency. The talk looked to me like a squabble between mates which unfortunately was affecting us as Nigerians. So Soyinka abhors his towns man OBJ and we must all suffer for that by listening to countless of talks by the Professor with this cold attitude to OBJ the focus. He did not disappoint yesterday, just as he did not disappoint at the many other events that we have been privileged to listen to him.

What we all fail to realise is that the Professor is old. He has succeeded In building a peter pan like image for himself where he does not age in our eyes and as such we expect him to ‘trend’. He is not trending o. He has been left behind without his knowledge. He really does not understand the power dynamics anymore, he does not understand the fact that his intellectual arrogance which has been pushing him and the southern intelligentsia have led us to nowhere as a people.

While we parade all sort of globally acclaimed scholarship, the ones that did not go to school are ruling us and taking us to Golgotha saddling us with learned elites who regularly climb the pulpit of arrogance to postulate on theories as to why things are not working.

As I stood near him listening with rapt attention, I could only but admire his diction, his sweet baritone voice while ignoring his words, they were meaningless to me and did not in any way address the solutions required to get us out of this basket case.

You see, rehashing happenings and actions of our leaders in sweet poetic language only achieves a comical effect on the immediate listeners and as we throng out of the hall in Ikoyi the harsh rays of the wicked sun hits us with the realisation that those words were nothing but meaningless words from a privileged member of the ruling elite.

No solutions were proffered. None was expected, the aim of the dialogue was achieved, it trended but with no concrete attempt at social mobilization, no direct push at fundamentally moving against such a wicked system where ‘’I never knew’’ is now the mantra of governance.

Let me end this missive with a quote from a big brother, an Investment Banker with a strong passion for our country, ‘’…the fault isn’t his. The fault lies with all of you that continue to disturb an 80+ year old man who should be left alone to his leisure activities and perhaps enjoy some female companions. In his lifetime he has already done many times over what the vast majority of us will never do in the cause of fighting for Nigeria’s progress…’

As I walk away with hunger pangs tormenting my tortured belly, all I could think of was the sweet aroma of a well-made Afang soup even as the emptiness of his words play a tango in my head. Twilight for a bright career.

Insecurity and the clamour for state police: Beyond sloganeering and grand standing