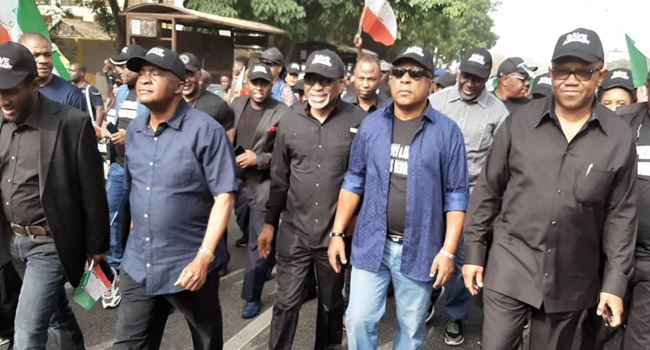 A pro-Buhari group, Buhari Media Organisation (BMO) has slammed the opposition Peoples Democratic Party (PDP), over recent protests against the judgement of the Supreme Court sacking former Imo State Governor, Emeka Ihedioha in favour of Hope Uzodinma of the All Progressives Congress (APC), describing the protests as a measure of PDP’s contempt for the Nigerian judiciary.

The BMO, which also called on PDP to apologise to the Chief Justice of the Federation, Justoce Tanko Mohammed, the Supreme Court and Nigerians in general, said the reaction of the opposition party was irresponsible.

It also added that allegations raised against the justices of the Supreme Court in the course of the protest were puerile and childish.

The stated these n a statement by its Chairman Niyi Akinsiju and Secretary, Cassidy Madueke on Wednesday, adding that tje protest was an insult to the Nigerian judiciary.

Read also: No substitution of candidates in the 22 by-elections set for Saturday, INEC declares

The statement reads: “Holding a protest to denounce the verdict of the Supreme Court, and further making unfounded allegations of wrongdoing against the Justices of the country’s apex court, is offensive to the country, and democratic principles which the country operates.

“The protests and comments made by the PDP were also outrightly reprehensible. For persons who had been privileged to enjoy the management of the nation’s affairs for 16 years – albeit in the worst manner – and its democratic institutions, the least expected from them is respect for these institutions.

“More surprising is that the so-called opposition figures demanded that the Supreme Court reverse itself, aside from demanding the resignation of Chief Justice Tanko Muhammed,” it added

The group further noted that the reaction of the party was akin to that of spoilt brats with an entitlement mentality, without a balancing sense of how to react when things do not go it’s way.

“PDP is led by cry-babies, spoilt with unpunished bad behaviour, hence their irresponsible and ridiculous protest against the Supreme Court. Whenever the party is awarded a victory by this same Supreme Court, PDP praises the Judiciary but whenever the same court delivers a judgment that does not favour the opposition, these people wail like spoilt brats.

“Only a few months ago, the same Supreme Court ruled against the All Progressives Congress (APC) and favoured PDP on Zamfara and Rivers States. The Apex Court was lauded and hailed by the PDP. Similarly, in the judgments of the court in the most recent election petition matters, the Supreme Court decided in favour of PDP in Bauchi, Sokoto, Adamawa and Benue States. To PDP, this is justice because it favoured them. That is the height of irresponsibility.

“To these spoilt brats, whenever the Supreme Court does not go its way, the court has no integrity, but when it does, it is indeed a court of justice. They lack shame. The PDP is simply afraid of the verdict the court would give in the coming days of judgments that are less likely going to favour it”, the group said.