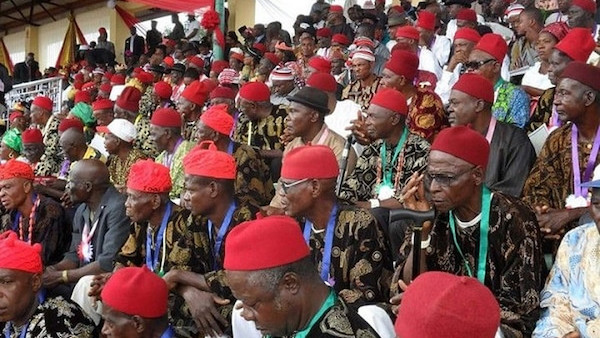 The Ohanaeze Ndigbo said on Tuesday fifth columnists are using the current political crisis in Imo to destabilize the state.

The Igbo socio-cultural group said it would not fold its arms and watch external forces to achieve their wicked desire in the state.

Imo State has been turmoil since the Supreme Court sacked its former governor, Emeka Ihedioha and declared Hope Uzodinma as the new governor of the state.

However, in a statement issued by its Deputy National Publicity Secretary, Chuks Ibegbu, Ohanaeze accused external bodies of fueling the crisis in the state.

The statement read: “Those who want to put fire in Imo State should think twice as Ohanaeze Ndigbo would not fold its arms and watch external forces destabilize the state. Why is it always in Igbo states that fifth columnists use politicians against themselves and the interest of their people? Why monies that should be used to develop Imo State are now used for solidarity and solidarity protest from all angles.

“Yes, aggrieved people can protest for or against but external forces should not be allowed to infiltrate Imo State or use Imo money to satiate their bottomless pockets. Now the judiciary, police and election umpire are interested in Imo State and causing confusion everywhere.

The group also urged the warring parties in the state to thread with caution, saying their actions constitute a threat to the unity of Nigeria.