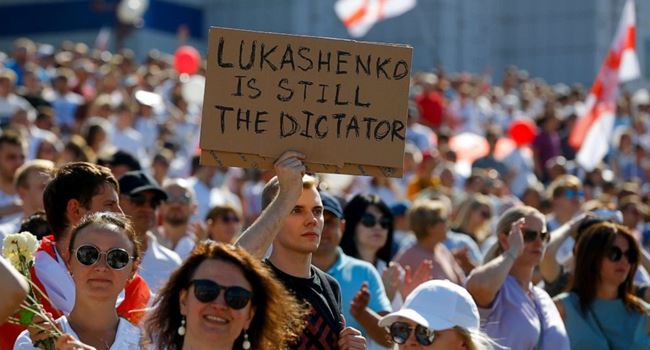 The streets have been thronged with angry protesters in Belarus demanding the immediate resignation of authoritarian President, Alexander Lukashenko over his moves to stay in power for a sixth term.

Reports say several hundred women marched across the capital of Belarus in heavy rain demanding the resignation of Lukashenko, continuing more than two months of protests against his government.

Further reports revealed that protests were sparked after official results gave President Lukashenko 80% of the vote in an Aug. 9 election that the opposition insists was rigged.

The women who marched in the capital of Minsk carrying umbrellas in the white and red colours of the opposition flag, demanded the immediate resignation of President Lukashenko, who has been in power for 26-years.

Lukashenko’a opponents also claim that the polls were rigged and that political novice Svetlana Tikhanovskaya, who ran in place of her jailed husband was the true winner.

Tikhanovskaya, who is in exile in neighbouring Lithuania, hailed protesters who had gathered “despite repressions, violence and cold.

“They resist Lukashenko’s regime because the people of Belarus want to live in a democratic and free country,” she wrote on Twitter.