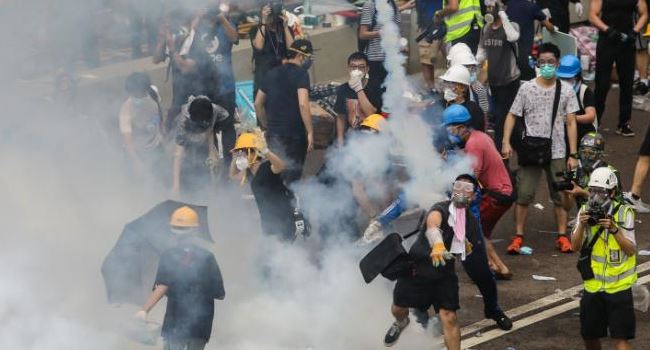 A group of agitated protesters at a suburban train station in Hong Kong on Wednesday evening, who gathered in commemoration of a violent attack there by masked assailants against supporters of the pro-democracy movement, clashed with riot police.

Reports say the police began what they called a “dispersal operation, using minimum force” at the end of the event forcing protesters to block roads and flashed laser pointers at officers.

As protesters continued to demand prosecution of pro-democracy attackers they sprayed a firehose and spread soap on the floor to slow a police approach, while piling up trash bins, a wheelchair and umbrellas in a makeshift blockade.

Chanting “Liberate Hong Kong” and “Revolution of our times,” the undeterred protesters also drew attention to what they say is the lack of progress by police in investigating the attack, which left both protesters and bystanders injured.

The development comes days after Chief Executive of Hong Kong, Carrie Lam informed that she is open to talks with critics of her government, but has stylishly refused to confirm if the controversial extradition bill has been withdrawn.

In a news conference on Tuesday morning, Lam announced that her office “will start immediately a platform for dialogue with people from all walks of life”, while promising to conduct an investigation into alleged police abuse of protesters.