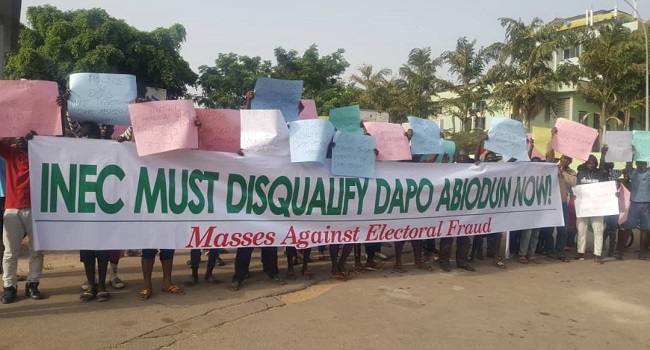 Opposition to the All Progressives Congress (APC) governorship candidate for Ogun State, Mr. Dapo Abiodun, seems to be growing by the day.

No less than 100 protesters, under the name “Masses Against Electoral Fraud”, on Thursdsy morning besieged the Independent National Electoral Commission’s (INEC’s) Abuja office urging the commission to disqualify Abiodun and his APC party from contesting the upcoming governorship election in the state.

The group’s several allegations border on “perjury, forgery, lying on oath, and orchestrating a fraudulent process of emergence as APC governorship candidate”.

The protesters, who sang solidarity songs and called Dapo and APC leaders many unprintable names, descended heavily on a national leader of the party, Asiwaju Bola Tinubu and the party’s national chairman, Adams Oshiomhole.

As at the time of filing this report, the protesters, led by Comrade Ishola Adesina, himself an Ogun State indigene, have proceeded to the National Assembly vowing to continue their protests until the authorities act according to their demands.

Recall that recently the media was awash with allegations of Dapo Abiodun missing the NYSC service and making false academic claims for which he was sued to court by another Ogun State indigene, Mr Baruwa.

The protest went without incident as the protesters kept a safe distance from the security agents manning the INEC National Secretariat.

Meanwhile, serious clashes with security agencies were averted at the beginning of the protests as a combined team of plain clothes and stern-looking mobile police teams at the gate of INEC insisted that the protesters cannot be allowed to stage their protests at the front of the commission.

Serious arguments ensued as the protesters remained adamant. After protesting for almost an hour at the preccints of INEC, they marched to the party’s headquarters where they continued their protests insisting that APC withdraw from the Ogun State governorship election because the party had imposed “potential disaster on the state.

They added that Dapo is “a person of very questionable antecedents”.