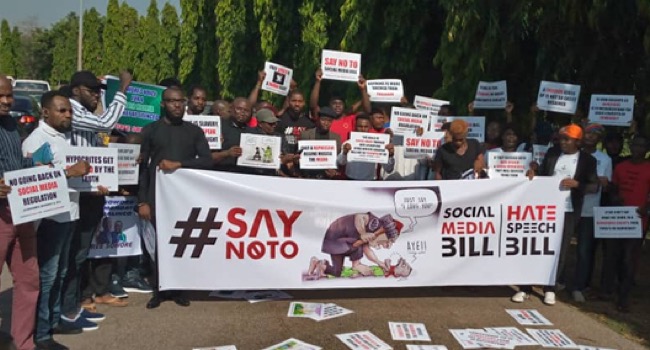 Aggrieved Nigerians on Wednesday stormed the National Assembly, Abuja to protest the continuous detention of Omoyele Sowore, the ‘RevolutionNow’ convener.

Sowore, a journalist and human rights activist along with a colleague, Olawale Bakare have remained in the custody of Department of State Sevices (DSS), despite supposedly meeting bail conditions for their release by a Federal High Court.

The protesters, aside calling on the National Assembly to prevail on the DSS to honour the court order and release Sowore, also said they were protesting to register their rejection of the social media and hate speech bills.

Both bills are currently before the Senate and at different stages of considerations.

According to the protesters, the bills were anti-people and a grievous infringement on the constitutional right of free speech.

They accused the Nigerian Senate of aiding and abetting full-grown ‘dictatorship’ by considering such bills.

A human right activist and convener of the protest, Deji Adeyanju argued that social media and the hate speech bill were unnecessary.

According to him, Section 24 of the Cybercrime Act 2015 had addressed the issue of fake news and hate speech.

Armed policemen were seen stationed at strategic locations within the National Assembly complex as the protesters chanted and sang protest songs.

3 Britons arrested in Mauritius for smuggling $1.3m worth of drugs in their stomachs