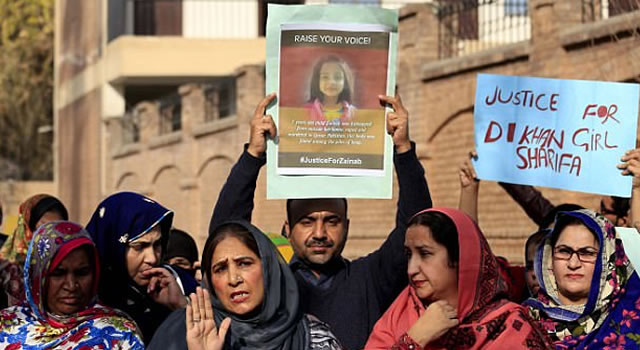 The central Pakistani town of Kasur has continued to witness protests by scores of residents over the rape and murder of a seven-year-old girl identified as Zainab Azari.

Reports say protesters blocked the main roads into the city, about 50km south of the eastern part of Lahore, using tractors and large cement blocks and shouted slogans like “justice for Zainab.

Earlier in the day, four security personnel who opened fire on an earlier demonstration over Zainab’s murder were taken into custody.

Footage from closed-circuit television showed her being led down a street near her home by an unidentified man and her body was found in a rubbish dump after she went missing for four days.

Reacting to the death of his daughter upon arrival with his wife from Saudi Arabia where they performed Umrah (holy pilgrimage) Ameen Asari, the father of the girl, claimed that the police “didn’t do anything” after his relatives reported the disappearance of his daughter.

“My relatives and neighbours told me that the police used to come, have food and leave,” he told local media. “While they didn’t do anything, my friends and family spent day and night looking for my daughter,” added Ansari.

“In Pakistan, security is only for leaders and we are just common insects.

Zainab’s mother, standing behind Ansari outside the airport, said: “I don’t know anything. I don’t know what happened. I just want justice. I have lost Zainab. I don’t have anything to say.”