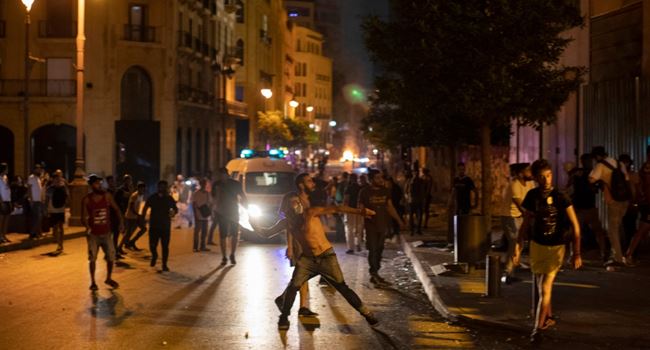 Violent protests have erupted in Lebanon with angry demonstrators calling for government’s resignation as authorities make scores of arrests as part of the inquiry into the deadly explosion.

Reports say security operatives have taken into custody 16 people as part of an investigation into the Beirut port warehouse explosion that shook the capital, state news agency NNA reported.

The Lebanese government has given an investigative committee four days to determine responsibility for the blast, Foreign Minister Charbel Wehbe told French radio on Thursday.

Officials said the death toll from the explosion killing at least 157 people and injuring 5,000 others was expected to rise as search-and-rescue operations continued for missing people

Lebanon officials ordered the house arrest of several port officials over alleged negligence in storing explosive chemicals at the port; which caused the massive explosion that killed scores of victims in the country’s busy capital of Beirut.

Investigators in Lebanon are probing the deadly blast that ripped across Beirut due to the storage of tonnes of a highly explosive fertiliser in a waterfront warehouse causing a massive explosion on Tueday with damage estimated between $10 to $15bn.

Related Topics:LebanonProtests in Lebanon
Up Next

Stranger dies in river trying to save three kids