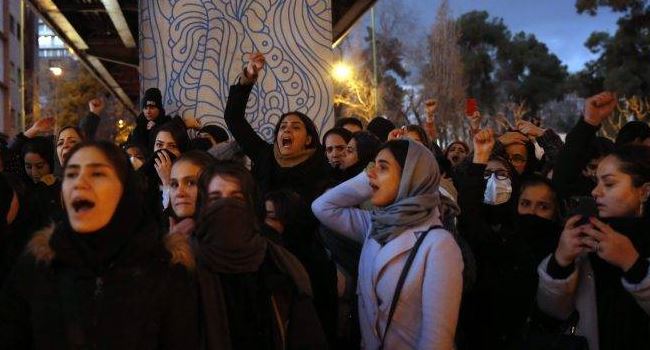 Scores of angry Iranians have reportedly flooded the streets of Tehran and beyond, demanding the resignation of Supreme Leader Ayatollah Ali Khamenei after Tehran said its military mistakenly shot down a Ukrainian plane, killing all 176 people on board.

Fars news agency reported that Iranian police dispersed students that were chanting “radical” slogans during the gathering in Tehran.

The students chanted slogans denouncing “liars” and demanded the resignation and prosecution of those responsible for downing the plane and allegedly covering up the accidental action.

The Iranian authorities had admitted that they shot down a civilian plane that claimed the lives of all 176 people on board, blaming human error.

In a tweet on Friday, Iranian Foreign Minister Mohammad Javad Zarif said that “human error” led to the Ukrainian International Airlines Flight 752 disaster which claimed no fewer than 176 lives.

“A sad day… Preliminary conclusions of internal investigation by Armed Forces: Human error at time of crisis caused by US adventurism led to disaster Our profound regrets, apologies and condolences to our people, to the families of all victims, and to other affected nations.”

The Iranian military earlier said the plane was accidentally shot down shortly after takeoff over Tehran on Wednesday.