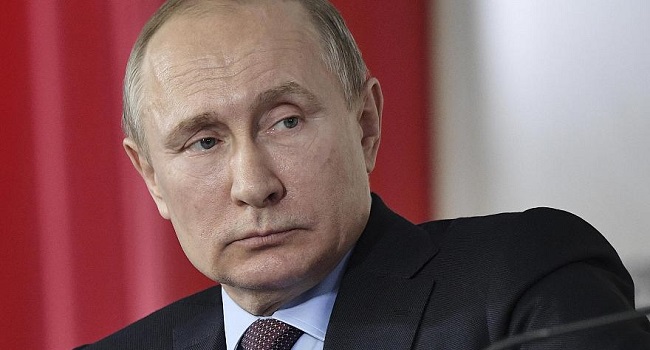 The President of Russia, Vladimir Putin has reacted to the impeachment of President Donald Trump saying the action against his American counterpart was based on fabricated reasons.

Putin who made the remarks while addressing a marathon annual end-of-year news conference on Thursday in Moscow, lashed out at Democrats for bringing Trump to his knees.

He said; “The party that lost the [2016] election is continuing the fight by other means.

“[The impeachment bill] still needs to go through the Senate where Republicans, as far as I know, have a majority. It’s unlikely they will want to remove from power a representative of their party based on what are, in my opinion, completely fabricated reasons.

“The Democrats accused Trump of a plot with Russia, and then it emerged that there was no kind of plot. It could not be the basis of impeachment.

“Then they thought up some kind of pressure on Ukraine. Nobody knows the origins of global climate change.

“We know that in the history of our Earth there have been periods of warming and cooling and it could depend on processes in the universe.

“A small angle in the axis in the rotation of the Earth or its orbit around the Sun could push the planet into serious climate changes.

“[We] must undertake maximum efforts to ensure that the climate does not change dramatically.

“For our country, this process is very serious,” he said. “We will undertake efforts to minimise the consequences for our country,” Putin added.

Trump made history as the third president of the United States of America to be impeached.

The House of Representatives in a historic vote on Wednesday, impeached him for abuse of power, setting up a Senate trial on removing him from office.

The House voted on two charges – that the president abused his power and that he had obstructed Congress.

Both votes fell along party lines with nearly all Democrats voting for the charges and all Republicans against.

Related Topics:trumpVladimir Putin
Up Next

NJC approves appointment of 6 heads of court, 26 others