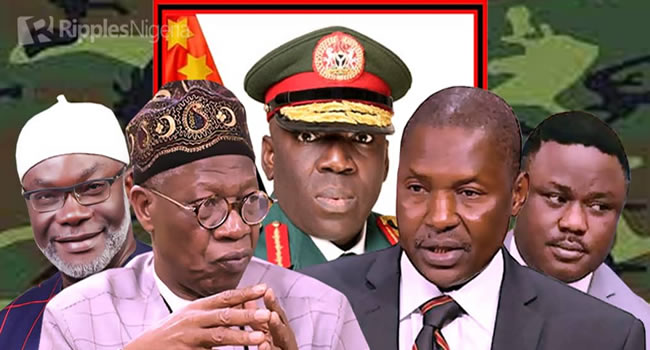 In this review, Minister of Information and Culture, Lai Mohammed, startled the nation when he claimed that the Federal Government had uncovered a whopping 476 fake news sites whose main occupation is to publish unsubstantiated stories about President Muhammadu Buhari.

While at that, the country went into mourning as the Chief of Army Staff, Lt. Gen. Ibrahim Attahiru, and 10 other military officers perished after a military Beachcraft 350 aircraft crashed in Kaduna.

We also tracked three other stories that kept the polity buzzing. Enjoy!

On May 17, Minister of Information and Culture, Lai Mohammed, revealed that the Nigerian Government had uncovered a whopping 476 fake websites managed by people whose only aim was to write disparaging stories about President Muhammadu Buhari.

Lai had said:
“It will amaze you that recently, we unveiled almost 476 online publication sites that are dedicated to daily engaging in churning out fake news to fight the government.

“The latest which I found ridiculous is the one that said days ago, they had information that when Mr. President was in the UK the last time, he was advised to step down because he could not even recognise members of his immediate family.

READ ALSO: QuickRead: Adesina’s daring romance with Man City. Other stories we tracked and why they matter

“I begin to wonder how they can go this far, simply because they know that people are gullible and they will make the fake news to go viral.

Why it matters
Lai’s declaration, again, speaks to Federal Government’s increasing irritation with perceived attacks on the Buhari-led administration, especially those propagated in the media.

Without substantiating his claims, the Minister’s startling findings may pass as a subtle warning to the media to conform or be gagged.

Indeed, many critics have termed the wild claims as an attempt to intimidate the Nigerian media into abandoning their pivotal role of holding government accountable.

On May 21, the Chief of Army Staff (COAS), Lt. Gen. Ibrahim Attahiru, alongside 10 military officers lost their lives in an air crash in Kaduna State.

A statement by the Defence Headquarters titled ‘Armed Forces of Nigeria loses Chief of Army Staff and 10 others in air mishap,’ read in part:
“It is with a heavy heart that the Armed Forces of Nigeria regrets to announce that this evening at about 1800 hours, the Chief of Army Staff, Lt Gen Ibrahim Attahiru, in company of his entourage, who were on official trip from Abuja to Kaduna, were involved in an air mishap.
“The unfortunate incident occurred after landing at the Kaduna International Airport due to inclement weather.”

Why it matters
The unfortunate incident, the third fatal crash in three months, raises very serious concerns over the state of fitness of aircraft in the fleet of the Nigerian military.

The hurried move by the military to explain away the cause of the crash, without proper investigations, also raises fundamental posers over the level of professionalism and capacity of the military to deal with emergencies.

With reports of past investigations yet to be made public, it is doubtful if any lessons had been learnt.

On May 19, the Nigerian Senate proposed a 15-year jail term for anyone who pays ransom for a kidnap victim. The bill sponsored by Sen. Francis Onyewuchi representing Imo East sought to prohibit the payment and receipt of ransom for the release of any person kidnapped, imprisoned, or wrongfully confined.

Onyewuchi, who led the debate said the bill essentially seeks to substitute section 14 of the Principal Act with a new section.
“Anyone who transfers funds, makes payment or colludes with an abductor, kidnapper or terrorist, to receive any ransom for the release of any person who has been wrongfully confined, imprisoned or kidnapped, is guilty of a felony and is liable on conviction to a term of imprisonment of not less than 15 years.

Why it matters
The bill, as proposed, casts significant doubt over the quality of thinking that informed the initiative.

A bill that ultimately seeks to visit more pains on the victims of kidnapping and their families, shows poor grasp of emotional intelligence and insensitivity to the overall well-being of citizens.

The instinct of survival is prime. To imagine that people will not act desperately to secure themselves and loved ones, in the face of serial government failures, is to play the ostrich game.

It is doubtful if Senator Onyewuchi’s bill will receive popular acclaim in the days ahead.

On May 19, Minister of Justice and Attorney General of the Federation, Abubakar Malami (SAN) got into the wrong books of Nigerians when he faulted the decision of the southern governors to ban open grazing in the region by comparing such with the prohibition of sale of spare parts in the north.

READ ALSO: QuickRead: Rumours of coup, Lai’s half truths. Three other stories we tracked and why they matter

While fielding questions on national television, Malami said:
“It is about constitutionality within the context of the freedoms expressed in our constitution. Can you deny the rights of a Nigerian?
“For example, it is as good as saying, perhaps, maybe, the northern governors coming together to say they prohibit spare parts trading in the north.
“Does it hold water? Does it hold water for a northern governor to come and state expressly that he now prohibits spare parts trading in the north?

Why it matters
Malami’s reckless utterance gives him away as one who may have quietly fueled the several clashes between herders and farmers through covert supports.

In betraying his emotions, Malami’s deliberate attempt at profiling a section of the country serves to deepen the cracks in the wall which have engendered calls for a dismemberment of the federation.

Indeed, his vexatious move to stand the law on its head calls to question his capacity and competencies as a legal luminary.

On May 21, the Governor of Cross River State, Ben Ayade, quit the main opposition party, Peoples Democratic Party (PDP), for the ruling All Progressives Congress (APC).

In doing so, he also declared that he was very sure that some of his former colleagues in the PDP would soon join the APC train.

“Just watch out, you will see; you will just realise that I know what I am saying. I am happy to announce to you that very soon, more governors are joining the APC because what we want to achieve is a country where we all can sit with the President and agree on our succession process, we don’t have to fight.”

Why it matters
Ayade’s move is a further confirmation that Nigeria’s political actors are hardly driven by principles or ideologies.

The multiple defections on either side of the divide show that the two dominant parties are birds of same feather, without any remarkable distinctions in their philosophy of governance.

It is easy to see through the lies of Ayade when he claims that his defection is founded on the broad goal to secure the future of the people of Cross River State.

Any discerning mind would note, without a struggle, that Ayade’s political goal is to strategically position himself ahead of 2023 by which time his tenure would have come to an end.

This argument is strengthened by the fact that, having lost PDP’s political structures to rivals, especially lawmakers in the National Assembly, the only option left was to seek solace elsewhere, and APC offered a comfort zone.

Have a great week ahead.

QuickRead: Buhari fails to spring surprises. Four other stories we tracked and why they matter

QuickRead: Adesina’s daring romance with Man City. Other stories we tracked and why they matter