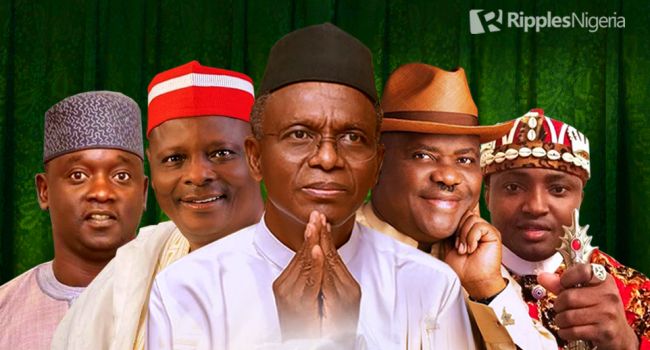 Armed bandits last week attacked an Abuja-Kaduna passenger train and left an unspecified number of people dead with many others injured.

This and four other stories were among the major news headlines in Nigeria last week.

An Improvised Explosive Device (IED) planted by the terrorists on a rail track went off and forced the train to derail around the Kateri-Rijana general areas of Kaduna State on the night of March 28.

The state’s Commissioner for Internal Security and Home Affairs, Samuel Aruwan, who confirmed the incident in a statement in Kaduna, said:
“The Kaduna State Government received multiple reports of an attack on the Abuja-Kaduna train service at around Kateri-Rijana general areas.
“Relevant action agencies were urgently contacted, and robust deployments of personnel were swiftly made to the area to secure the passengers on board.”

The incident illustrates the current perilous state of Nigeria where nowhere is safe. The attack on the passenger train, coming on the heels of a security breach at the Kaduna International Airport, two days earlier, is a clear evidence that the criminals have been emboldened by the government’s inaction and are therefore unrelenting in their push for a state of total lawlessness in Nigeria.

Without a sustained effort to contain the terrorists who are now roaming, the country may well brace for total anarchy and rapid descent into a failed state.

Rivers State Governor, Nyesom Wike, on March 27 declared his 2023 presidential bid. The governor, who announced his intention during a visit to his Benue State counterpart, Samuel Ortom, said: “To remove APC from power, I’m the person who can tell them enough is enough. We must take this power and I’m ready to take it for the PDP. God is with us that’s why APC keeps failing everyday.”

The governor’s declaration for the presidency shows that politics is an interest-driven game, and that his frequent interventions in the political space may have have designed to further his power-seeking ambitions.

Read also: QuickRead: APC’s consensus arrangement. Four other stories we tracked and why they matter

While Wike has repeatedly called for a power shift to the South in 2023, he has not been explicit on which part of the region the President should come from, and this amounts to self-serving.

All said, it must be said that Wike has inalienable rights under the constitution to aspire for political offices, including the presidency.

3. El-Rufai on use of mercenaries

Kaduna State Governor, Nasir el-Rufai, on April 2 declared his intention to hire foreign mercenaries if the Federal Government and the Nigerian Army failed to crush terrorists and bandits in the North-West.

The governor, who stated this while addressing State House correspondents in Abuja, hinted that four other governors may join him in the arrangement.

He said: “Why is it that up till now, the security has not gone to kill them? Where are our soldiers? Why have they not done it? That is why I have come to see Mr President.
“And also I have said that if these actions are not taken, it becomes a must for us as governors to take measures to protect our citizens, even if it means we will import mercenaries from outside the country to do it. If our soldiers fail, I swear to God, we will do that.”

The contemplation of deploying foreign mercenaries against the terrorists suggests a crisis of confidence and loss of faith in the ability of the Nigerian military to completely rout the criminals who have completely taken the nation hostage.

The remark also reinforces the call for the Federal Government and, most importantly, the military to adopt a fresh strategy in the ongoing efforts at tackling the insecurity in many parts of the country.

The effrontery at which the criminals launch attack on soft targets with little or no resistance from the security agents has further given credence to the general perception that those who are expected to protect the citizens have surrendered the country to the criminals.

The former governor of Kano State, Rabiu Musa Kwankwaso, on March 29 dumped the Peoples Democratic Party (PDP) for the New Nigerian Peoples Party (NNPP) after weeks of speculation on his next political move.

Kwankwaso, who confirmed the development in a letter addressed to the PDP chairman in his Kano State ward, said, among others:
“It is with deep sense of responsibility that I write to notify you that, as a result of some serious and irreconcilable differences, I have reached the conclusion that my continued stay in PDP is untenable.”

The ex-governor’s decision to part ways with the opposition party is about personal interest, and further confirms the fact that the average Nigerian politician is scarcely driven by ideology.

In this season of election, when new political alignments will emerge in a desperate move by players to remain relevant in the system, it will not be surprising if political nomadism which is a permanent feature in Nigeria’s democracy does not continue well into the eve of the election next February.

Hiding under the “Rescue Nigeria Project,” Nigerians should expect to see politicians come up with new arrangements as they search for new homes in a bid to remain relevant in the nation’s political space in the next dispensation.

The Indigenous People of Biafra (IPOB) alleged on April 1 that Simon Ekpa, a self-acclaimed disciple of its detained leader, Nnamdi Kanu and his gang “Autopilots” were behind the enforcement of the sit-at-home order and killings in the South-East.

The IPOB spokesman, Emma Powerful, who stated this in a statement, said: “The Indigenous People of Biafra (IPOB), under the leadership of Mazi Nnamdi Kanu, wish to tell Governor Chukwuma Soludo of Anambra State…should know that our enemies are committing atrocities using our name in their desperation to blackmail IPOB.
“It is a certain Simon Ekpa and his criminal gang called autopilots that are carrying out threats against people’s lives because of a non-existent Monday sit-at-home. They are criminals, kidnappers and robbers.”

The disclaimer by IPOB may have formally confirmed a split in the structures of the separatist group, and long-held views that some criminals are taking advantage of the group’s grievance with the Nigerian state to wreak havoc in the South-East.

The onus, therefore, is on the Federal Government and security agents, in particular, to strengthen its intelligence gathering mechanism in a bid to restore peace in the troubled zone.

The festering crisis is also indicative of the fact that outright war against the secessionists may not prevail, and that government should continue to explore the option of dialogue with the IPOB in the resolution of the crisis in the South-East.

QuickRead: Utomi’s call for govt of national unity. Four other stories we tracked and why they matter

QuickRead: APC’s consensus arrangement. Four other stories we tracked and why they matter