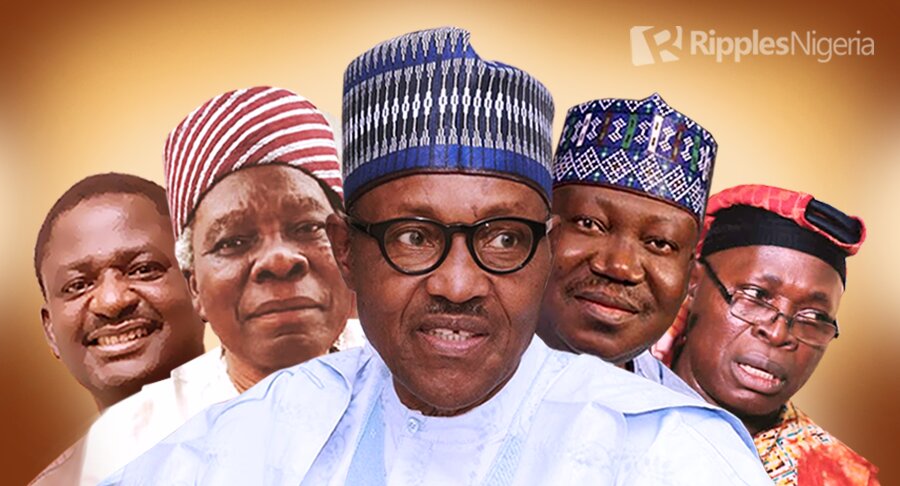 In the week in review, Special Adviser to President Muhammadu Buhari on Media and Publicity, Femi Adesina, once again, played to the gallery by comparing the fight against insecurity by this administration to Manchester City winning the 2020/2021 English Premier League (EPL), and in doing so, turned every logic on its head, and came short of blaming Nigerians for the situation they have found themselves.

Buhari, on his part, practically begged Nigerians to show him more understanding in his fight against insecurity and in his typical fashion, refused to take the blame as the leader of the country.

We also tracked three other stories that kept the nation ticking over. Enjoy the offering.

On May 14, Special Adviser to President Muhammadu Buhari on Media and Publicity, Femi Adesina, likened the Buhari-led administration’s fight against insecurity in the country to Manchester City Football Club winning the 2020/2021 English Premier League (EPL).

In his regular Facebook column, ‘From the Inside’ with the caption “Lessons for Nigeria from EPL”, Adesina said Buhari has the capacity to win the insecurity war but is being hampered by those who do not want him to success.

“Recall what happened in the 2019/2020 season. Man City was eyeing a treble. Three back-to-back seasons as champions, and a record in English football. But the adversaries knew the record that was to be set, so they arrayed themselves against the team.

“Just as some forces knew the record that was to be achieved by Muhammadu Buhari as Nigerian President, and which he had begun to show since 2015 when he got into office, and they positioned themselves against the government.
“Buhari will surely confound the enemies of Nigeria, and it would happen under Buhari’s leadership,” Adesina wrote.

Adesina’s flirtatious dance with Man City must be seen as another futile attempt at painting an unsustainable narrative about Buhari and how perceived enemies do not want him to succeed, believing that the woes that have been heaped on the country in the last six years are all caused by Buhari haters and, in his favourite parlance, the wailers.

But Adesina fails to understand that Nigerians have become more discerning such that the endless blame game further exposes the behind of the administration.

Indeed, the constant reference to imaginary enemies encourages citizens to peep beyond the smokescreen to query the underlying issues stalling the nation’s match to progress.

The daring comparison of the Buhari administration with a world class team as Man City is at best a play to the gallery, what with the absence of a transformational leadership and a clear cut strategy on how to harness resources, both human and material for Nigeria’s development.

On May 13, President Muhammadu Buhari came out begging Nigerians to show more understanding with him on the current security situation in the country.

He had said through his Senior Special Assistant on Media and Publicity, Garba Shehu:

“I expect Nigerians to be more understanding on the issues involved, looking at the time and available resources.

“For example, when we came in, in the North-East, ask people in Adamawa and Borno States and the South-South in terms of security. Without security, you can’t do anything. Our big surprise and disappointment is what is happening in the North West and we are dealing with it.

“The elite should make the attempt to understand the military. If we order weapons and armored vehicles, it takes time for the manufacturer. It takes time to ship them and when brought here eventually, they are taken to training institutions, train the trainers before sending them to the field. This is a very long process,” Buhari said.

Buhari’s search for excuses on the intractable security challenges facing the country is simply a reminder to Nigerians that they may have to wait a little longer for solutions.

Blaming everyone but himself is typical of a leadership gap which has shown him as lacking capacity to deal with the myriad of challenges manifest in several other spheres of the Nigerian life.

And, to ask for continuous understanding is to assume that the patience of Nigerians is inelastic. If anything, Nigeria may just be heading towards its tipping point.

On May 11, the Muslims Rights Concern (MURIC), through its Director-General, Prof. Ishaq Akintola, showed their regular pattern of religious intolerance when it advocated the emergence of a Muslim President of Yoruba origin ahead of the 2023 elections.

Read also: QuickRead: Rumours of coup, Lai’s half truths. Three other stories we tracked and why they matter

In a statement by Akintola, the group said they will vehemently reject another Christian president as no “single Yoruba Muslim has held the post of president or vice president since independence.”
“Ex-President Olusegun Obasanjo is reportedly making attempts to draft the current president of the African Development Bank (ADB), Dr. Akinwunmi Adesina, into the 2023 presidential race.

“Obasanjo’s attempt to drag Dr. Akinwunmi Adesina who is also a Yoruba Christian into the presidential race negates the principles of fairness, justice, and equity. It is an attempt to rob Yoruba Muslims of the presidential slot and it violates a cardinal principle of democracy, namely, inclusiveness.

“It is our contention that another Yoruba Christian presidency will usher in another opportunity for Christian hegemony and the marginalisation, stigmatisation, repression, and persecution of Yoruba Muslims,” the statement read.

MURIC’s stance on the leadership recruitment process throws further insight into how much the political class is willing to sacrifice merit and excellence on the alter of narrow parochial tendencies.

It, indeed, highlights how the country’s fault lines are deepening and calls to question the patriotic and nationalistic orientation of the Nigeria’s privileged few.

It would seem, therefore, that the future holds a fading opportunity to build a truly progressive country founded on the great values of excellence, merit and honour.

On May 13, the Senate President, Ahmad Lawan, condemned the calls by southern governors demanding a restructuring of the country.

“…Even if you are a governor, you are supposed to be working hard in your state to ensure that this restructuring you are demanding at the federal level, you have done it in your state as well.

“What you may accuse the Federal Government of, whatever it is, you may also be accused of the same thing in your state,” he said.

Lawan’s comments typify the political intrigues that have dominated the clamour for a national conversation on the Nigerian project and the seeming rejection of the idea of restructuring by northern elements.

His arguments are also in sync with those of the presidency which has, through its media organization, been lampooning the idea of holding a national confab but constitutional amendments via the National Assembly.

With sustained opposition from the northern political class, ensconced in the presidency and elsewhere, Nigerians must brace for the rising political tensions and the continued quest by some sections of the country to secede in the face of perceived injustice.

In all, Lawan betrays his emotion and sends a clear signal that he might lead other like-minds to frustrate any rigorous debate on issues relating to restructuring or national confab.

Also on May 13, renowned professor of History, Prof. Banji Akintoye, raised the alarm when he alerted governors in the South-West that the region was at the risk of terrorist attacks.

In his letter, Akintoye, a second republic senator and the leader of Ilana Omo Oodua, an umbrella body for Yoruba self-determination groups, informed the governors that the terrorists had come too close for comfort.

“There is danger that if we don’t mount that high level of vigilance today, very serious pains can be inflicted upon us as a nation and on countless numbers of citizens of our nation.

“A combination of Fulani terrorists, Boko Haram and ISIS have occupied Niger State which is immediately north of Yorubaland, thereby providing for themselves very easy access into Yorubaland through the Yoruba parts of Kwara and Kogi States,” part of the letter read.

Akintoye may sound alarmist but the facts advanced by him are near inconvertible when placed against reports emanating from north central Nigeria.

Even the Buhari administration admits as much but appears totally handicapped to act.

What this bodes for the average citizen is the hard reality that almost every section of the country has become vulnerable to banditry and terrorists attacks.

With anarchy looming, and ungoverned territories growing by the day, the country may as well prepare to kiss its sovereignty good bye and await global recognition as a failed state.

QucikRead: Lai’s sizzling discoveries. Four other stories we tracked and why they matter

QuickRead: Rumours of coup, Lai’s half truths. Three other stories we tracked and why they matter