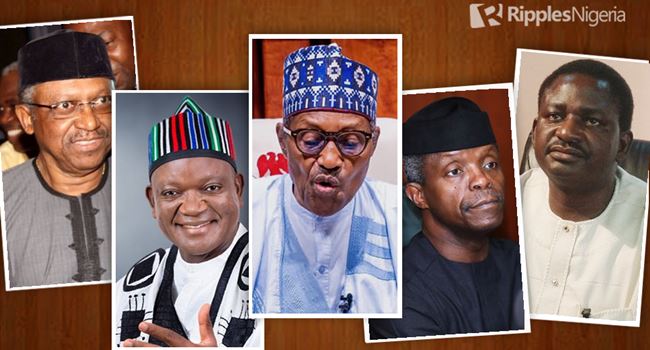 In the wake of the invasion of the Nigerian Defence Academy by terrorists, Special Adviser to President Muhammadu Buhari, Femi Adesina, rather than address the issue at hand, decided to make a sweeping statement by insulting Nigerians for daring to call on Buhari to take charge of the situation.

We also tracked four other stories which kept Nigerians talking during the week in review.
Enjoy this offering till we come your way next week.

On August 27, Special Adviser to President Muhammadu Buhari on Media and Publicity, Femi Adesina, in his Facebook column, ‘From the Inside’, described Nigerians as being “ungrateful and unthankful”, saying:

“What kind of people are we, really? Instead of rallying our military, encouraging them and spurring the government further into action, they say the foulest things that can come from the nether region… spewing expletives and concocting conspiracy theories. They simply forget where we were coming from, and where we now are. Ungrateful. Unthankful. Ungracious.”

Adesina’s unguarded utterance, by all intents and purpose, further lends credence to several insinuations that the Buhari-led administration would rather play the ostrich than confront the reality of Nigeria’s steady match into abyss.

Indeed, his wild claims is a testament to the widely-held belief that the government does not broker any request for accountability and good governance which is the right of Nigerians under a democratic dispensation.

It also beggars the place of the government owning up to its failures and taking steps to redress the escalating insecurity situation in the country, rather than brow-beating the already devastated populace into submission, while shirking from taking proactive steps to assure Nigerians that such an act of brazen attack on its premier military facility should have no place in the system.

2. Buhari loses the trust of Nigerians

Also on August 27, a survey conducted by the Africa Polling Institute (API) revealed that the trust Nigerians had in the President Muhammadu Buhari-led administration has dropped to an all-time low of 26 per cent.

The survey which was tagged ‘Nigeria Social Cohesion Index Report’, showed that the 75% trust Nigerians put in the President in 2015 had plummeted in six years.

“The trend analysis reveals a decline in the proportion of Nigerians that feel truly proud of the nation. The trust Nigerians had in President Muhammadu Buhari which was 75% in 2015 has dropped to 26% in six years,” the report noted.

The API survey is a damning testament to the fact that Nigerians have been clearly alienated from the government, and the lack of trust stems from different factors ranging from the draconian policies of the government, the glaring apathy of political leaders to the sufferings and miseries of the citizens, and the ‘we-versus-them’ stance the present administration has adopted.

The integrity gap also derives from the fact that the government has continued to turn a blind eye to the outcry by Nigerians, especially the burning issues of injustice and inequity which have given birth to clamours for separation.

On August 26, Vice President Yemi Osinbajo, described the discrimination and alienation of Nigerians based on their state of origin as another form of apartheid.

In a statement by his Senior Special Assistant on Media and Publicity, Laolu Akande, at the National Social Cohesion Dialogue organized by the Africa Polling Institute, Abuja, Osinbajo noted that many Nigerians were denied jobs and admission into educational institutions based on their states of origin.

Read also: QuickRead: PIB becomes PIA, Atiku’s hat in the ring again. Three other stories we tracked and why they matter

“In many quarters, there are feelings of alienation and exclusion… Our Constitution enjoins government to secure full residence rights for every citizen in all parts of the Federation, and this is an imperative that we must commit to across all tiers of government. All that should matter in evaluating ourselves is where we live and fulfill our civic obligations,” Osinbajo said.

Osinbajo’s statement raises further concerns over the deepening fault lines in the country, and lays bare the pretentious clams to building a cohesive and unified nation when citizens can be denied basic rights because of where they hail from.

His worries also speak to the institutionalized discrimination engendered by the Federal Character principle wherein merit has often been sacrificed on the altar of mediocrity.

On August 25, the Presidency berated Benue State Governor, Samuel Ortom, for “stirring up hatred among the country’s ethnic groups.”

“Governor Samuel Ortom has few political principles…Ortom takes the cheapest and lowest route possible by playing on ethnic themes – and in doing so knowingly causes deaths of innocent Nigerians by inciting farmers against herders, and Christians against Muslims,” Shehu alleged, among others.

The Presidency’s attack on Governor Ortom, instead of addressing the issues he raised on the vexatious grazing routes saga, is another typical example of its penchant for aggressively going on the offensive whenever a dissenting voice goes against its policies.

What this means is that President Buhari and his men have continued to demonstrate high level intolerance which further heightens fears that its disposition could hurt Nigeria’s fledgling democracy.

On August 27, the Nigerian Government directed its Federal Ministry of Health to implement a ‘no work, no pay’ policy for striking resident doctors and other concerned health workers.

The directive which was contained in a letter signed by the Director of Hospital Services, Federal Ministry of Health, Dr Adebimpe Adebiyi, partly read as follows:

“I am directed to inform you to commence the implementation of the no-work-no-pay policy on the striking doctors including other workers that may embark on strike consequently.”

The invocation of the ‘no-work-no-pay’ policy by the Federal Government on the striking doctors further suggests government’s insensitivity to the plight of Nigerian workers who have been at the receiving end of poor leadership at all levels.

The move to force the hand of doctors is a complete show of intimidation, and also highlights the tardiness with which government is handling demands for a revival of the healthcare sector.

It is, indeed, a signal to Nigerians that they may as well forget the intervention of government and resolve to carry their own cross in the area of managing health needs.

QuickRead: Lai’s claims of ‘deep fake news’. Four other stories we tracked and why they matter

QuickRead: PIB becomes PIA, Atiku’s hat in the ring again. Three other stories we tracked and why they matter