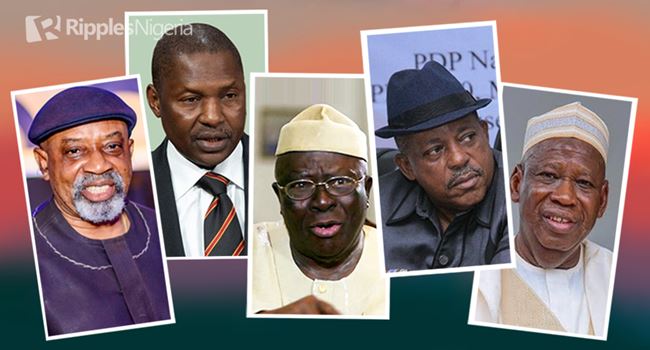 Apex Yoruba socio-cultural group, Afenifere, has slammed former military President, Ibrahim Babangida, following his recent comments that he was compelled to annul the June 12 1993 elections, which the late politician MKO Abiola won, over fears of a bloody coup.

The group found the belated explanation by the former leader as an insult on the collective intelligence of Nigerians.

We also tracked four other stories that got Nigeria buzzing during the week week in review.

On August 7, the pan Yoruba socio-cultural group, Afenifere, took an exception to the excuse given by ex-military president, Ibrahim Babangida, for annulling the June 12, 1993 presidential election, saying it was an insult on the intelligence of Nigerians.

In a statement issued by its Secretary-General, Sola Ebiseni, Afenifere described Babangida’s comments as not only an insult to Nigerians but baseless.

“Nigerians are not interested in any excuse being given by IBB. It is even most preposterous that IBB will only now be insulting the intelligence of Nigerians that he annulled their mandate to forestall a violent coup, which, by reasonable inference, he was aware of,” the statement said.

The backlash from Afenifere and, indeed, other Nigerians speaks to the hollowness of IBB’s arguments and calls out the former dictator for his consistent refusal to apologize for annulling the June 12, 1993 elections, adjudged by many as the freest and fairest in the history of the country.

Indeed, it is a reminder to IBB and his cohorts that history will never judge them right for truncating democracy, and sowing the seeds of discord that have continued to elevate ethnic and tribal politics over competence, character and excellence.

On August 5, Governor Abdullahi Ganduje of Kano State warned that secession is not the way out of the current challenges afflicting the country.

He had said, among others:
“Let me repeat here that Nigeria is a united and indivisible country; our Constitution has taken care of that; I don’t see secession as the way out of the current challenges afflicting the nation.

“Instead, advocates of secession should have a change of heart and I recommend dialogue as a crucial option for addressing their problems.”

Ganduje’s remarks reinforce the dominant narrative pursued by the majority of Nigeria’s political elites on the indissolubility of the country.

While the heightened agitations for separation explains the fallacy of Ganduje’s disposition, his call for dialogue is hypocritical in every respect as there is no record of him pushing or persuading the ruling party to which he belongs to tow the path of genuine national dialogue.

Unless, and until, the country’s leadership stops being pretentious with claims to forging national unity, so long will sections of the federating units feel unaccommodated and plot their exit from the federation .

On August 6, Minister of Labour, Dr Chris Ngige, once again, threatened to replace striking resident doctors if they refuse to return to work by Monday, August 9.

While issuing the stern threat, Ngige stated that he had invoked Section 43 of the Labour Act which states that for the period a worker withdraws his services, the government or his employers are not entitled to pay.

Read also: QuickRead: Saraki’s unending travails. Four other stories we tracked and why they matter

“We will also withdraw their money and use it to pay those we acquired during the period they were away. If you go to the International Labour Organisation (ILO) principles at work, it guarantees a worker the right to strike but it has consequences,” the Minister fumed.

Issuing a sack threat to striking doctors without the patience to address their grievances, in the first instance, goes to show the disdain the government holds of medics in the country.

By drawing a battle line, and at a time the President of the country, Muhammad’s Buhari, is away in London to seek medical help, the government shows lack of tact, insensitivity and poor managerial acumen.

With the unfortunate face-off, it is to be expected that more Nigerians would have to suffer the indignity of dying slowly and painfully in the hands of a collapsed system.

On August 4, the in-fighting within the main opposition Peoples Democratic Party (PDP), took another turn when the National Chairman of the party, Uche Secondus, called on the party stakeholders to respect its constitution in their quest to resolve its current challenges.

“Reports reaching the media office shows clearly that this character is deploying all devious means to try and diminish the person and character of the National Chairman with a view to having his way of ultimately hijacking the structure for his disproportionately large ambition,” Secondus said without mention the name of the chieftain he described as a ‘Father Christmas.’

The local tussle within the PDP leadership epitomizes the larger malaise of the country’s practice of democracy without democrats.

Indeed, by working to sack a duly constituted leadership, some elements within the party hierarchy are simply showing their disdain for rule of law.

PDP’s internal wrangling is not an isolated case. Given that the ruling All Progressives Congress (APC) is facing the same challenge, the battles underline how contending forces are jostling to seize the party structures and be in pole position to influence the emergence of party candidates ahead of 2023.

On August 6, a group of elders and politicians from Kano State dragged the National Assembly and the Minister of Justice and Attorney General of the Federation (AGF) Abubakar Malami (SAN) to a Federal High Court in Abuja, seeking to hasten the exit of Biafra and the South-East from Nigeria.

Part of the prayers by the Kano elders read:
“An order directing the defendants to provide a framework that will pave way for the self-determination of the South-Eastern states so as to leave the geographical entity called Nigeria…”

The court case instituted by the Kano elders continues to shed more light on the deepening cracks in the Nigerian federation, defined largely by sustained agitation for secession by some sections of the country.

No doubt, the resolve to test the law will not only help to enrich the country’s jurisprudence but also strengthen its institutions.

However, it must be noted that the challenges confronting the Nigerian project revolves around a growing loss of sense of belonging by some stakeholders.

Answers to expressions of resentments must, therefore, be sought politically by addressing the worrisome issues of injustice and inequity.

QuickRead: Buhari’s ‘robust response’ to insecurity. Four other stories we tracked and why they matter

QuickRead: Saraki’s unending travails. Four other stories we tracked and why they matter