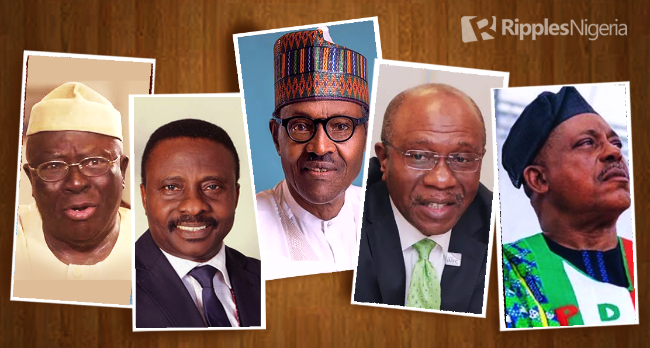 The apex Yoruba socio-cultural group, Afenifere, last week urged various stakeholders in the Nigerian State to jettison the 1999 Constitution in order to tackle the underlying problems in the country.

This and four other stories stirred national discussions in the week gone by.

The pan Yoruba group on October 27 called for Nigeria to return to the 1963 Constitution in a bid to put the country on the path of progress.

In a communiqué issued at the end of a meeting held at the home of its leader, Ayo Adebanjo, in Ijebu-Ode, Ogun State, Afenifere said the problems bedeviling the country would persist until the changes in the constitution are effected.

“The country should go back to the 1963 Constitution that was abrogated by the military or in the alternative, the meeting of ethnic nationalities and related stakeholders should be conveyed.
“Such a meeting would provide an opportunity for all of us to redefine the basis of staying together. We are still very much convinced that it is in either of the two propositions that solutions to numerous problems afflicting Nigeria lie.”

Why it matters
Afenifere’s remarks continue to show that Nigerian is a work in progress, with strong underlying concerns that the current structure still permits injustice and inequity, leading to agitations for a clearer definition of the relationship between and among the various federating units.

Indeed, the 1999 Constitution has been widely criticized as a document hurriedly put together by the military in 1998 in preparation for handover to the democratic government.
Several of Nigeria’s challenges are attributed to perceived imbalances and inadequacies of the constitution.

While the quest for the country’s return to the 1963 Constitution continues to gather momentum, Nigerians can only hope that whatever decisions are taken in the ongoing constitution amendment process are undertaken to ensure the indivisibility of the Nigerian nation.

2. CAN on political candidates

The Christian Association of Nigeria (CAN) on October 29 advised political parties against presenting presidential and vice-presidential candidates of the same faith in the 2023 election.

The CAN President, Samson Ayokunle, who made the call during a meeting with the Deputy Senate President, Ovie Omo-Agege, also charged politicians not to heat up the polity ahead of the 2023 elections.

He said: “We urge that a balance of both religious practitioners be considered. We don’t want Christian/Christian ticket or Muslim/Muslim ticket in 2023.”

Why it matters
It is a truism that in Nigeria religion is often employed among politicians and policymakers, as a determining factor in who occupies public offices and a major influence on the policy direction of government.

The intrigues and nuances that usually go into this process, more often than not, lead to a compromise of public interests by the religious leaders and political actors and further widen the fault lines in the country.

CAN’s position exemplifies how the religious identity of aspirants and patronage by the powerful elite shape voters’ behaviour in Nigeria’s leadership recruitment process where merit has been sacrificed for faith and ethnic considerations.

The development makes Nigeria one of the few countries in the world to tap into the Central Bank Digital Currency (CBDC) initiative.

In his address at the forum, the President said: “e-Naira, the electronic version of our national currency, which puts us on track to become the first African country to introduce a Central Bank Digital Currency was launched on October 25th, 2021. We believe this and many other reforms, will help us increase the number of people participating in the banking sector, make for a more efficient financial sector and help us tackle the illicit flow of funds.”

Why it matters
The eNaira without doubt will advance the banked population further and encourage financial inclusion as demanded by Nigerians.
Its benefits include the control of several elements that affect the volatility of Naira.

READ ALSO: QuickRead: Sanusi’s warning on 2023 presidency. Four other stories we tracked and why they matter

But how the CBN will address the encumbrances associated with the process remain to be seen considering the hitches that had trailed users’ access to the app since the launch about six days ago.

How prepared is the CBN to handle challenges that come with this digital revolution? This is a question that will require an urgent answer as Nigerians gradually get used to the new product.

President Buhari on October 29 asked campaigners of tenure extension for the present administration to drop the idea.
Buhari, who addressed some Nigerians in Saudi Arabia, said:
“I swore by the Holy Qur’an that I will serve in accordance with the constitution and leave when my time is up. No ‘Tazarce’ (tenure extension).
“I don’t want anybody to start talking about and campaigning for an unconstitutional extension. I will not accept that.”

Why it matters
Buhari’s revelation provides some insight into the existence of a motley crowd of praise singers, ready and willing to be hired to truncate popular will. The President with his remarks has emphatically sounded the death knell on any quest for tenure extension either real or imagined.

Leaders have different reasons for refusing to leave office. In some countries, the answer lies in a lack of credible succession plans. In others, leaders blatantly refuse to resign because of their despotic and kleptocratic tendencies.

Buhari’s position on tenure extension, therefore, suggests that he is determined to leave the seat on a high despite the criticism that has continued to trail his administration.

The Court of Appeal on October 29 dismissed the suspended National Chairman of the Peoples Democratic Party (PDP), Uche Secondus, bid to stop the party’s national convention.

Justice Haruna Tsammani, who led the three-member panel of the appellate court said: “By the result of this decision, the 6th Respondent (PDP) is empowered on the authority of this court’s decision to convene and to hold its National Convention without let or hindrance.
“There shall be no order for costs. The appellant’s notice of motion re-filed on October 27, 2021, Court of Appeal fails and it is hereby dismissed.”

Why it matters
The court’s ruling reaffirms the supremacy of the rule law and the independence of the judiciary.

While the major hurdle standing between the PDP and its quest to mount a serious challenge against the All Progressives Congress (APC) in 2023 may have been overcome, the court ruling further strengthens the institutions of state and the entrenchment of democracy.

QuickRead: IPOB’s U-turn. Four other stories we tracked and why they matter

QuickRead: Malami on financiers of Igboho. Four other stories we tracked and why they matter