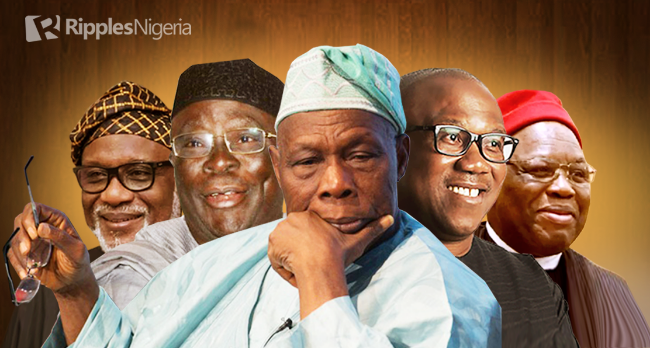 The Ondo State Governor, Rotimi Akeredolu, on Friday called for devolution of power to the states.

1. Akeredolu’s call for devolution of power

On September 30, Akeredolu insisted that devolution of power to the federating units was the ultimate solution to the unending security crisis in the country.

In a statement issued by his Chief Press Secretary, Richard Olatunde, the governor also called for coordinated efforts among Nigerians for the nation to thrive.

He said: “It is time for us to rethink this pseudo federalism and heed the calls by sub-nationals to restructure the polity in a way that will engender progress and development…
“The federating units must not be over-dependent on the Federal Government. The over-centralization of the polity is the very bane of our collective existence as a country. There must be a total departure from this tread…”

The governor’s recent disposition on this subject and other allied matters is a reminder of the unfinished discussion on restructuring of the country which demands an honest dialogue between and among its various entities.

It also lends credence to the continued agitation for the establishment of state police as an ideal solution to the country’s security challenges following the recent attacks by terrorists and other criminals in Ondo, in particular, and other parts of the country.

Such conversation among stakeholders in the Nigerian state will not only redefine the workings of the perceived faulty structures that have been largely identified as the major cause of agitations in the country but also set the template for the effective operation of the system for the good of all.

2. Another poll’s prediction of Obi’s victory

Bloomberg’s prediction was the second time in about three weeks a random sampling procedure favoured the ex-Anambra State governor to win next year’s election.
“Of the 92 percent of participants who said they’ve decided how to vote, 72 percent named Obi as their first choice.
“Of those who are still unsure, 45 percent said the 61-year-old is their preferred candidate,” the organisation stated.

The Bloomberg poll is another confirmation of the growing acceptability of Obi’s candidature in Nigeria.

While success in opinion poll hardly translates to success in real-time situation, the exercise conducted on the LP candidate shows that he is on the right path and will pose a formidable threat to the duo of the All Progressives Congress (APC) candidate, Bola Ahmed Tinubu and his friend, Atiku Abubakar of the Peoples Democratic Party (PDP) next year.

All said, success in a major national election goes beyond scientific procedures. It is an outcome of several factors. Although nobody expected Obi to get this far, the momentum, if sustained, or pitched higher may just see him nick it in 2023.

A splinter group of Ohanaeze Ndigbo on September 25 urged the people of the North to reject the Peoples Democratic Party (PDP) presidential candidate, Atiku Abubakar, in the 2023 elections.

In a statement issued by its Secretary-General, Okechukwu Isiguzoro, the group also slammed the major opposition party for jettisoning the zoning arrangement before its May 28 presidential primary.

Read also:QuickRead: Court’s order on ASUU. Four other stories we tracked and why they matter

The statement read: “Anyone who breached the gentleman arrangement by our patriots for a rotational presidency between the North and the South as enshrined in our consciousness to balance equity, inclusiveness, national peace, and stability of the country does not mean well for Nigeria.

“2023 is the turn of a Southern presidency and attempts by the opposition party to ride on ethnicity and religious predispositions to get power will plunge Nigeria into the abyss of disintegration.”

The group’s remark speaks to the fixation by Nigerians on the zoning policy that has caused more harm than good to the country since it was foisted on the citizens by the military in 1999.

Unless a court of competent jurisdiction decides otherwise, the decision on who takes or where to zone their tickets remains the inalienable right of political parties and would have to be accepted as such.

He, according to a statement issued by his media aide, Kehinde Akinyemi, stated this when the President of the Christian Association of Nigeria (CAN), Daniel Okoh, visited him at his Olusegun Obasanjo Presidential Library in Abeokuta, Ogun State.
He said: “In the next election if we do not watch it, it may make or break Nigeria. And I pray that it will make Nigeria.
“If you stand on the truth, you stand for justice and equity…and I will say it with all sense of responsibility now if we do not watch it, the politicians will wreck this country and we will all regret it.”

While challenging Nigerians to get it right in their leadership recruitment process,
Obasanjo may have hit the nail on the head in his assessment of the quality of leadership produced by the country in the last few years.

The 2023 elections without doubt present the country with another opportunity to correct past mistakes by electing individuals that will return the country on the path of progress following the failure of the current administration in all areas of our national life.

Obasanjo’s preachments, however, call to question how much of efforts his administration committed to building enduring institutions that could sustain the right leadership recruitment processes.

5. Adebanjo on Afenifere’s support for Obi

The leader of the pan-Yoruba socio-political organisation, Afenifere, Chief Ayo Adebanjo, on September 26 explained why the group would support the Labour Party presidential candidate, Peter Obi, in the 2023 general elections.

In a statement he personally signed, the Afenifere leader urged Nigerians to support Obi and his running mate, Datti Baba-Ahmed, in 2023 in order to keep the country as one indivisible entity.

The statement read: “Not a few Yoruba leaders questioned why I should be supporting Peter Obi, a candidate of Igbo extraction, against Asiwaju Bola Tinubu, a Yoruba. I took my time to explain that the presidency is not a contest between the Yorubas and the Igbos and to a large extent I was able to convince many.
“But ever since social media has been filled with comments tending to ethnicise the campaign instead of making it issue-based, Afenifere has, therefore, decided to address you today (Monday) and through you educate the public on the ideological and equitable principles which have influenced our decision.”

Although the elder statesman has an inalienable right to support any candidate of his choice, his reason for backing the ex-Anambra State governor is a clear sign Nigerians are not ready to wean themselves of factors and considerations bedeviling the country’s leadership recruitment process.

Adebanjo’s argument that the South-East had been marginalised in the choice of leaders means that the Afenifere still believes that primordial considerations such as ethnicity and religion, rather than competence, will continue to dictate or determine who occupies leadership positions in Nigeria.

QuickRead: Registration of ASUU splinter groups. Four other stories we tracked and why they matter

QuickRead: Court’s order on ASUU. Four other stories we tracked and why they matter