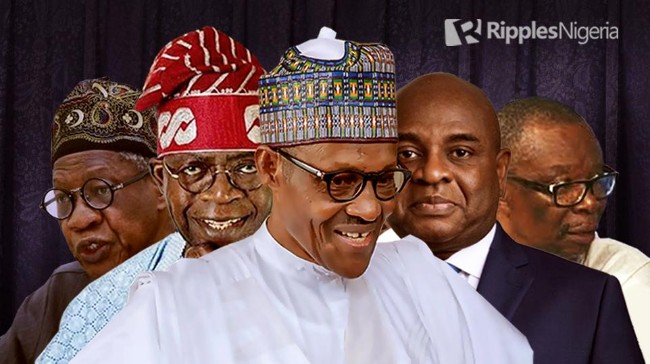 Tinubu announced Shettima as his running mate after a meeting with President Muhammadu Buhari in Daura, Katsina, on July 10.

He said: “Kashim Shettima is the substantive running mate. Although I have not discussed it with him, I have disclosed it to you. The spirit of 1993 is upon us again in 2023.

“I have never been an indecisive man and have no present intention to become one. Having now listened to the sage, careful advice of a broad section of the party and of the nation, there are a few points I feel I must make about the exceptional and extraordinary person with whom I will share the APC ticket and the principles of open and good governance that informed this choice.”

The outcry over the ruling party’s decision to opt for a Muslim-Muslim ticket is a clear reminder of how religion has driven a wedge among Nigerians.

It is unfortunate that religion, instead of binding Nigerians together, has widened the fault lines and divided the citizens along sectarian routes.

Although the APC candidate has tried to invoke the 1993 spirit to defend his choice of Shettima, he is more experienced to know that the times and situations are different.

The mayhem unleashed on Nigerians by Boko Haram and other group of terrorists has turned Nigerians against each other and strengthens their resolve, particularly the Christians, to move against any arrangement that will totally exclude them from the country’s leadership arrangement for another four years or more.

The former Deputy Governor of the Central Bank of Nigeria, Kingsley Moghalu, on July 11 challenged the Federal Government to seek foreign assistance in the fight against terrorism in the country.

Moghalu, who made the call in a programme on Arise TV, lamented that the Nigerian security agencies had become powerless in the efforts to secure the country.

He said: “I will recommend foreign help in the fight against terrorism. I am deeply worried about the state of things in the country. Terrorists attacking prisons, presidential convoy and others showed we have lost it as a country in terms of security. It also indicates that our security agencies are powerless.”

The former African Democratic Congress (ADC) presidential candidate’s remarks sum up the failure of the Federal Government in the efforts at securing the country.

The primary responsibility of governments all over the world is the security of their citizens and any government that has been unable to achieve this would be deemed to have failed.

Instead of throwing up its hands in the air and allowing the terrorists to continue to have a field day pillaging communities, the government should put aside ego, admit its failure and be courageous enough to seek support from willing partners.

To do otherwise is to Nigeria in a deeper quagmire.

3. FG’s denial of agreement with ASUU

The Federal Government on July 14 denied the existence of a Collective Bargaining Agreement (CBA) with the Academic Staff Union of Universities (ASUU).

In a statement issued by the Deputy Director of Press and Public Relations in the Ministry of Labour and Employment, Olajide Oshundun, the minister in charge of the ministry, Chris Ngige, described as an outright falsehood the claim by ASUU President, Emmanuel Osodeke, and other top members of the union on the agreement between both parties.

He said: “When Collective Bargaining Agreement is produced between unions and the federal government, it is not the president that signs.
“But by the government side, the Ministries, Departments and Agencies (MDAs) led by the direct employer with the conciliating ministry witnessing.
“We wish therefore to inform Nigerians that there is no such CBA that has been reached between the federal government, ASUU and other university unions on the renegotiation of their salaries and allowances (wages).”

Read also:QuickRead: ISWAP attack on Kuje prison. Four other stories we tracked and why they matter

The back and forth negotiations between the federal government and ASUU have put a dent in Buhari’s government and cast doubt on its ability to honour agreements freely signed with workers’ unions in Nigeria.

When a government continues to deny an agreement signed with its employees, particularly in an important sector such as education, it leads to doubt about its avowed commitment to the development of the country.

The development has fuelled the insinuation that the government is more concerned about preparations for the 2023 general elections while putting on hold the discussions with ASUU and the future of millions of students who have been at home for more than five months.

In its ruling on a lawsuit filed by Socio-Economic Rights and Accountability Project (SERAP) and 176 concerned Nigerians, the court said: “The Buhari administration in suspending the operations of Twitter violates the rights of SERAP and 176 concerned Nigerians to the enjoyment of freedom of expression, access to information and the media, as well as the right to fair hearing.”

The court’s ruling reaffirms the importance of freedom of expression, and access to information as essential requirements of a democratic system.

It is a reminder to the government that such a decision and other autocratic methods of suppressing dissenting voices have become increasingly unpopular and have no place in a democracy.

5. Buhari on his presidency

President Muhammadu Buhari on July 11 expressed his eagerness to conclude his tenure in 2023.

Buhari, who addressed some All Progressives Congress (APC) governors, legislators, and political leaders who paid him Sallah homage at his residence in Daura, Katsina State, said it had been tough ruling Nigeria.

“By this time next year, I will have made the most out of the two terms, and the remaining months I will do my best.
“I wish the person who is coming after me the very best.
“I am eager to go. I can tell you it has been tough. I am grateful to God that people appreciate the personal sacrifices we have been making,” he said.

The president’s remark sums up the troubles that characterise his seven-year rule.

For Buhari, it is a sad realization of how the country has wobbled under his leadership.
After promising so much and delivering very little in the last 86 months, all hope may not lost, as the president could still, within the remaining months, rally his government and leave last-minute legacies for Nigerians at least for the sake of posterity.

QuickRead: Prediction on 2023 presidential election. Four other stories we tracked and why they matter

QuickRead: ISWAP attack on Kuje prison. Four other stories we tracked and why they matter