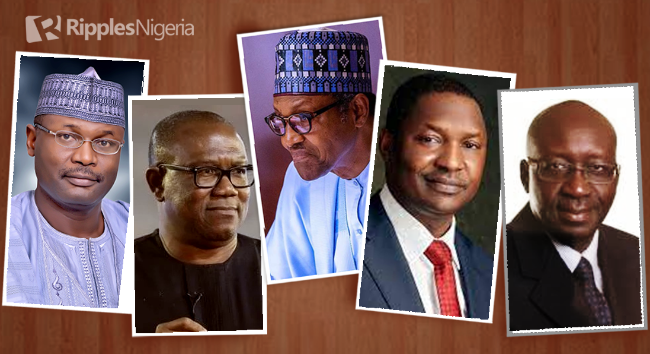 Six candidates vying for the chairmanship position of the All Progressives Congress (APC) withdrew from the race last week paving the way for former Nasarawa State Governor, Abdullahi Adamu, to assume the position.

This and four other stories were among the major highlights of happenings in Nigeria last week.

The Minister of Special Duties and Inter-governmental Affairs, George Akume, who signed the letter dated March 25, 2022, and addressed to the Chairman of the APC Election Sub-committee, said they agreed to the consensus agreement following a plea by President Muhammadu Buhari for them to support Adamu.

The decision of some of the aspirants to withdraw from the race would seem to show the supremacy of the party’s interest over personal aspiration.

However, it is also debatable if the President’s decision to anoint a party chairman has not further queried the pretentious disposition to internal democracy.

The days ahead will, therefore, prove if the unity list that produced most of the consensus candidates has done well to harmonize all dissenting voices and put the ruling party on a steady keel for the 2023 general polls.

The National Chairman of the Peoples Democratic Party (PDP), Iyorchia Ayu, said on March 24, the party would not abandon its tradition of zoning political offices in the 2023 general elections.

Ayu stated this when he inaugurated a 37-man zoning committee at the party’s national secretariat in Abuja.

The chairman said: “PDP has a history of rotating our offices. Anybody who doesn’t get it this time should wait after the tenure of whoever will be our next president.”

The PDP seems to be in quandary on how to resolve the issue of where to zone its presidential ticket as the 2023 presidential election approaches.

Party leaders and other stakeholders are divided on the issue, and the dilemma derives largely from the growing sentiments that the presidency should reside in the south after Buhari’s exit.

The permutations have been made more difficult by arguments that the PDP scenario does not fit into that of APC as its last presidential candidate to occupy Aso Rock was from the South.

The Attorney-General of the Federation (AGF) and Minister of Justice, Abubakar Malami, said on March 23, his office had initiated the process for deleting the contentious Section 84 (12) of the Electoral Act.

Malami, who addressed journalists in Abuja, said: “By the judgment, the court directed the office of the Attorney-General to take the necessary steps to delete the provision, which in essence implies that the provision should not form part of our laws.”

READ ALSO: QuickRead: Arrest of Obiano. Four other stories we tracked and why they matter

The whole brouhaha on the contentious section of the electoral law is a product of power-play among the nation’s ruling class.

However, it is unfortunate that the erroneous narrative about the unconstitutionality of Section 84(12) of the Electoral Act is driven by the AGF, who appears to have a vested interest in the matter.

The Supreme Court on March 25 ratified the decision of the Independent National Electoral Commission (INEC) to de-register 22 political parties.

Justice Ejembi Eko, who delivered the lead judgment, set aside a judgment of the Appeal Court which quashed the parties de-registration.

He said: “This appeal by INEC is meritorious and is hereby allowed. The decision of the court below is set aside.”

The apex court’s order reaffirms the rule of law and the power of INEC to deregister any party that fails to meet the minimum constitutional requirement for registration.

It also reinforces the call to improve the guidelines on party registration in Nigeria following the preponderance of mushroom political parties which exist just to make up the numbers.

Former Anambra State Governor, Peter Obi, on March 24 declared his 2023 presidential bid.
The ex- governor, who announced his intention to vie for the nation’s highest political office disclosed at a meeting with traditional rulers from the South-East, said: “I am here to notify our traditional rulers and seek their support on my intention to vie for the presidency in 2023.
“ If elected as Nigeria’s President next year, I will create jobs, boost our economy and improve the quality of our education. “

The former governor’s declaration is not at all surprising considering the dearth of quality options in the nation’s political space, and the growing clamour for a President of southeast extraction.

Governance has gone beyond criticizing the government of the day, it is about ideas and what you will bring onboard or do differently if given the chance by electorates.

Although Obi is one of the old faces in the system, politics is a game of numbers and his chances in 2023 will depend on how much ground he has covered since his unsuccessful push for the presidency with Atiku Abubakar more than three years ago.

QuickRead: Abuja-Kaduna train attack. Four other stories we tracked and why they matter

QuickRead: Arrest of Obiano. Four other stories we tracked and why they matter