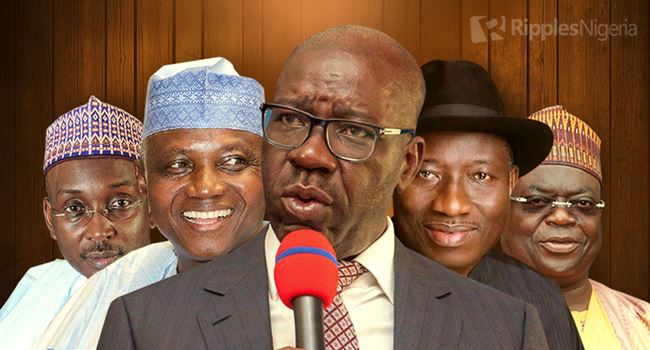 In the week in review, the Director-General of the Progressives Governors Forum (PGF), Salisu Lukman, frantically waved the red flag concerning some uncomfortable developments within the ruling All Progressives Party(APC).

The Governor of Edo State, Godwin Obaseki, also raised the alarm on the precarious state of Nigeria’s economy, noting that the Federal Government had been printing extra Naira to support dwindling revenue.

We also tracked three other stories that made headlines in the media space and kept Nigerians talking.

On April 12, the Director-General of the Progressives Governors Forum (PGF), Salihu Lukman, cautioned the party members not to feel too comfortable as the ruling party could lose massively in the 2023 elections due to what he described as sabotage by some of its leaders.

In a statement titled: “Determining Factors for 2023 Contests in APC: Internal Contest and Inconvenient Reality,” Lukman lamented that the party was losing grips and could lose out in 2023.

“There is also the need to appeal to leaders of the party to rise above the narrow attitude of relating with challenges based on estimation of support or opposition for ambitions of party leaders,” Lukman said.

Lukman’s warning is a clear indication that all may not well at the core of the party, with different interests tearing into its loose fabrics for selfish ends.

It further highlights the views held by many critics that APC has not grown beyond being a special purpose vehicle (SPV) which was hurriedly assembled to edge out the then ruling Peoples Democratic Party (PDP).

Indeed, Lukman speaks to the growing distress and tension within the party, occasioned largely by visible attempts by governors of the ruling party to seize its party organs. However, serving the interest of governors clearly shows that Lukman may not be a disinterested party in the ensuing intrigues.

The Mala Buni-led caretaker committee, in all intents and purpose, is a creation of the governors and designed to place State helmsmen in the most strategic position to influence the direction of the party ahead of 2023.

On April 11, Governor Godwin Obaseki of Edo State, alerted Nigerians to the fact that the Federal Government printed N60 billion in March in support of the economy.

“We run a very strange economy and a strange presidential system where the local, state and federal government, at the end of the month, go and earn salaries. We are the only country in the world that does that.

Read also: QuickRead: Sani’s ‘friendly’ advice to Tinubu. Four other stories we tracked and why they matter

“At the end of the month we all just go to Abuja, collect money and come back to spend; we are in trouble. Huge financial trouble! …Last month, we got FAAC (Federation Account Allocation Committee) for March; the Federal Government printed an additional N50 to N60 billion to top-up for us to share.”

Obaseki’s claims and denials by the Nigerian State, through the office of the Minister of Finance, Zainab Ahmed, confirm the increasing absence of synergy between and among the ruling elites.

The seeming loud altercations, while pitching the ruling party against the opposition, show the sordid state of the economy and how larger national interests are slaughtered on the altar of narrow group interests.

Obaseki’s lamentations, if anything, should be a challenge to rally the country’s best hands to find quickest solutions to the twin issue of productive capacity and revenue generation.

Above all, it is time to painfully admit that income from oil can no longer be trusted to sustain the Nigerian economy as nations of the world seek alternative sources of energy.

The former Governor of Niger State, Babangida Aliyu, on April 16, confessed that some governors on the platform of the Peoples Democratic Party (PDP) worked against the re-election bid of ex-President Goodluck Jonathan because he (Jonathan) had reneged on an agreement not to seek a second term.

In a statement titled, “Why we opposed Jonathan’s second term bid,” Aliyu, who was the Northern Governors’ Forum at the time, said, among others, that supporting the then president would have short-changed the north.

He claimed that there was an agreement that Jonathan should complete the remaining years of late President Yar’Adua’s tenure and go for only one term before handing over to a president from the north.

“But midway, Jonathan insisted on running for the office in 2015 against the grain of our earlier agreement. And the governors in the North felt the North would have been short-changed if Jonathan had succeeded; we rose stoutly to insist on the agreement we all had,” he said.

Aliyu’s confession is another clear indication that Nigerian politicians scarcely have the interest of the nation but, instead, care more about personal and regional interests.

The direct implication of this is that the nation’s leadership recruitment process is flawed and often throws up the best of the worst.

Rather than pursue merit, Nigeria’s leadership crisis may continue to fester as power remains negotiated on the primordial ethos of tribal and religious sentiments and not the long interest of the nation founded on excellence.

On April 14, Senior Special Assistant on Media and Publicity to the President, Garba Shehu, gave assurances that the President Buhari-led government was doing everything possible to ensure the remaining girls abducted from the Government Girls Secondary School, Chibok, Borno State in 2014, were rescued.

In a statement he issued as the world marked the seventh anniversary of the schoolgirls’ abduction, Garba said:
“No one is giving up hope here. Efforts to secure their release through various channels and activities of the security and intelligence agencies remain on course.
“The recent decisive push by the military against the terrorists gives hope that a breakthrough is possible and could happen anytime soon.”

Nigerians, it would seem, have become drunk on too many promises that they no longer repose too much confidence in the government in the area of security management.

With too many failed promises, there is a worrisome conclusion that the Presidency is merely re-echoing what they believe Nigerians want to hear.

Six years down the line, it is doubtful if the Buhari-led administration is building sufficient capacity to stem the tide. The country may well brace for continuous national emergencies as it concerns insecurity.

On April 12, former President Goodluck Jonathan cautioned Nigerian politicians to allow the electorates to determine who wins in elections instead of resorting to the courts to get results overturned.

Jonathan stated this in a chat with journalists during his visit to TOSTV Network studios in Abuja, arguing that the standard practice across the world is that electoral bodies exercise the sole responsibility of returning candidates and declaring winners in elections.

“My point is that our laws should suppress the issue of the judiciary returning candidates,” the ex-President said.

Jonathan’s treatise restates everything that is wrong with the country’s electoral processes, and offers a new challenge to the Nigerian state to enshrine integrity into the electoral system.

Mindful of the gaps in the former President’s proposition, however, it can also be held that his views open the door to useful conversations on the future of the Nigerian project and the integrity of its leadership recruitment processes.

A most pertinent question needing answers would be what becomes of electoral outcomes where a winner does not substantially comply with the electoral laws? Will the system admit endless reruns until the will of electorates prevail?

While the state remains dubious or pretentious in its claim to fine-tune the electoral laws and system, so will the country grope in the dark in its quest to enthrone the will of the people.

Till we come your way again, have a blissful week.

QuickRead: Pantami gets handshake, Uzodinma tastes terror. Three other stories we tracked and why they matter

QuickRead: Sani’s ‘friendly’ advice to Tinubu. Four other stories we tracked and why they matter