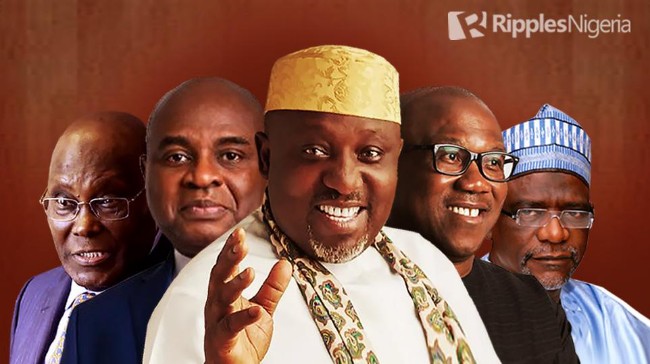 At the PDP national convention held on May 28 at the MKO Abiola Stadium, Abuja, Atiku polled 371 votes to defeat the Rivers State Governor, Nyesome Wike and 11 other candidates.

The Chairman of the PDP Presidential Election Committee, David Mark, who announced the primary election result, said: “Atiku Abubakar polled 371 votes in the PDP Presidential Election today while Governor Nyesom Wike scored 237 votes, and the former Senate President, Bukola Saraki, garnered 70 votes.
“763 votes were cast in the exercise with 12 voided. With the power conferred on me by the party, I hereby declare Atiku Abubakar as the PDP presidential candidate for the 2023 general election having polled the highest number of votes in the election.”

The emergence of Atiku is a full confirmation of PDP’s dumping of the power rotation or zoning principle.

It, therefore, raises serious fears about political instability, especially as the club of southern governors and other social-cultural groups in the region have relentlessly clamoured for power shift to the south after President Muhammadu Buhari makes his exit.

It is to be expected, in the days ahead, that the country’s political temperature will further rise as interest groups in the South-East, in particular, make good their threat to dissuade politicians from the zone from emerging as vice presidential candidates.

Moreover, there are strong indications that Atiku’s emergence may have further thrown the wedge in the All Progressives Congress (APC) as the ruling party prepares to elect its own candidate against the backdrop of claims that a northern candidate stands a better chance to defeat Atiku.

Obi, who featured in a Channels Television programme, Politics Today, said he dumped the Peoples Democratic Party (PDP) because of activities that did not align with his values.

He said: “I came into a system and I was part of the PDP for a long time. Nobody can question my loyalty and when I left, I left in a decent manner. I am not desperate to be President; I just want to see the country work.
“I move to a party where their processes align with my principles. I would rather lose doing the right thing than win doing the wrong thing. I was the first Nigerian to win a political case and weather an impeachment; I didn’t quarrel but sought recourse at the courts. This is why there are staggered elections in Nigeria.”

Although the former governor claims he left the PDP based on principle, his exit from the opposition party to join the Labour Party shows that politics is an interest-driven game with every action taken by players dictated by vested interests.

All said, it should not surprise anyone if the ex-governor emerges the presidential candidate of the Labour Party.

Read also :QuickRead: El-Rufai’s alarm on Boko Haram terrorists. Four other stories we tracked and why they matter

The Economic and Financial Crimes Commission (EFCC) on May 24 arrested the former governor of Imo State, Rochas Okorocha, after he failed to appear in court for his trial for alleged N2.9 billion fraud.

In a statement posted on its Facebook page, the commission said the invasion of the Imo West Senator’s residence followed his refusal to honour invitations extended to him after jumping the administrative bail granted to him in April last year.

The statement read: “Operatives of the Economic and Financial Crimes Commission (EFCC) on May 24, 2022, arrived at the Maitama, Abuja home of a former governor of Imo state, Senator Rochas Okorocha, to effect his arrest.
“The move followed the refusal of the former governor to honour invitations after jumping the administrative bail earlier granted him by the Commission.”

The arrest of the former governor confirms the widely-held assertion that everyone is equal before the law, status in society notwithstanding.

The development also reinforces the call for the strengthening of the anti-graft agencies to carry out their functions effectively when the need arises and check public office holders from abusing their positions.

The conduct of the anti-graft agency in the course of Okorocha’s arrest, however, suggests that it may not have weaned itself completely of allegations that it is sometimes used as an instrument to harass or oppress perceived enemies.

The Senior Staff Association of Nigerian Universities’ (SSANU) Joint Action Committee and the Non-Academic Staff Union of Educational and Allied Institutions (NASU) on May 28 extended their strike by one month.

In a circular signed by its National President, Muhammed Ibrahim, and the General Secretary, Peters Adeyemi, SSANU said the decision to extend the strike was made to give additional time for all demands to be addressed.

The circular read: “In view of the fact that most of the issues in contention have not been resolved as the process of resolving the same is ongoing and to allow the process to be concluded, we hereby direct that the ongoing strike be elongated by one month.
“Hopefully, all processes would have been concluded and all issues in dispute favorably resolved.”

Additionally, the festering crisis shows that the administration cannot be trusted to honour agreements freely signed with organisations in the country.

The crisis does not bode well for the country’s education system as many students who had hoped for a timeous completion of their programmes remain at home while the authorities in their usual manner continue to fish for time as preparations for the 2023 general elections reach a critical stage.

A former Deputy Governor of the Central Bank of Nigeria, Kingsley Moghalu, on May 25 charged Nigerians to be decisive in their quest to change the narrative about the country in the 2023 general elections.

Moghalu, who stated this during a banquet organized by the leadership of African Democratic Congress (ADC) for its presidential aspirants, noted that the 2023 elections would offer Nigerians the golden opportunity to address the challenges, including corruption and insecurity in the country.

He said: “Nigeria was the first son of the black race, we were yet to realize our potential as a people. I am running for the presidency because the poverty in this country is simply too much to ignore anymore.
“And if it continues, it will lead to a social revolution, I have no doubt about it, it will happen but it’s just a matter of when.”

The ex-CBN official’s remark is a challenge to Nigerians to finally put an end to the bad leadership that has put the country on the backfoot for many years by electing the right people in next year’s national election.

With the underwhelming performance of the current administration in the last seven years, it is clear that Nigerians need a fresh set of leadership to steer the ship of the nation.

This, however, calls for change in the country’s leadership recruitment system that has continued to foist on the citizens the same set of recycled and incompetent politicians who see public offices as platforms for personal enrichment or quick returns on investments.

QuickRead: Tinubu’s remarks on Buhari. Four other stories we tracked and why they matter

QuickRead: El-Rufai’s alarm on Boko Haram terrorists. Four other stories we tracked and why they matter