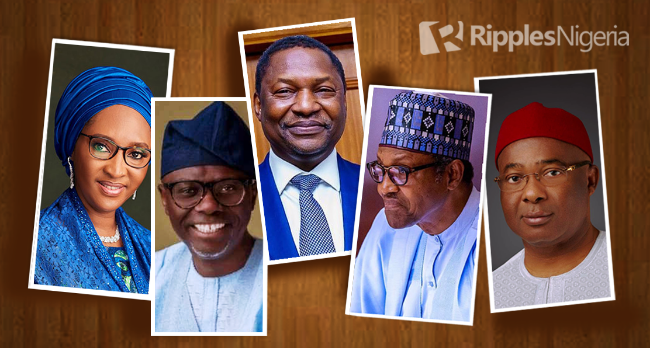 After weeks of foot-dragging, the Federal Government, last week, designated bandits as terrorists in order to ramp up the war against the mass murderers across the country.

This and four other stories made the headlines during the week.

The Federal Government on January 5 declared all bandit groups operating in Nigeria as terrorists.

Umar Gwandu, the Special Assistant on Media and Public Relations to the Attorney-General of the Federation and Minister of Justice, Abubakar Malami, confirmed the gazetting of the court’s order in a statement.

It read: “Notice is hereby given that by the Order of the Federal High Court Abuja, in suit No. FHC/ABJ/CS/1370/2021 dated 25th November 2021 as per the schedule to this Notice, the Activities of Yan Bindiga Group, Yan Ta’adda Group, and other similar groups in Nigeria are declared to be terrorism and illegal in any part of Nigeria,…and are proscribed, pursuant to sections 1 and 2 of the Terrorism (Prevention) Act, 2011.”

Government’s latest move, no doubt, gives legal teeth to its intention to engage the bandits with all the might the state could muster.

The designation of bandits as terrorists, therefore, ensures a more holistic approach in the ongoing efforts to tackle the scourge and restore public trust in the ability of the government to protect citizens from the criminals.

It must be admitted, though, that without any political will to engage the terrorists, the gazetting of any law will amount to a piece of thrash.

President Muhammadu Buhari on January 5 declared that state police was not an option in the efforts at tackling the country’s security challenges.

The President’s emphatic rejection of the state policing system paints him as an autocrat who would brook no superior argument even if it’s a majority view.

His disposition, therefore, deals a seemingly huge blow on advocates of restructuring who argue that the power to contain banditry and other petty crimes should be devolved to the states.

This development is, indeed, a sad reminder that the country’s federal system is only but a pretentious caricature of the real thing. For as long as the President stays obstinate, states that are being repeatedly pillaged by terrorists must devise other means to secure their borders instead of relying on the obviously overwhelmed Nigeria Police Force.

The Attorney-General of the Federation and Minister of Justice, Abubakar Malami, on January 5, accused the South-West Governors’ Forum of dishonesty in the matter involving the Lagos State Governor, Babajide Sanwo-Olu, and a police officer in the state.

READ ALSO: QuickRead: Increase in police salaries. Four other stories we tracked and why they matter

The face-off between the AGF and the governors further highlights the poor delineation of power between the centre and other federating units.

The incident also brings to the fore the abuse to which the judiciary had often been subjected to by contending power blocks in the country.

This is clearly illustrated in the Supreme Court judgment where the original Magodo landowners were deprived of their rights by the Lagos State government, only for the latter to cry blue murder when it was obvious they were already standing on the side of injustice before the federal government waded into the matter.

The Federal Government on January 6 dismissed reports on the imminent disengagement of civil servants due to cash crunch.

The Minister of Finance, Budget, and National Planning, Zainab Ahmed, who made the clarification during the NTA’s “Good Morning Nigeria” programme, said: “Mr. President does want to disengage staff. That is what he has directed from the beginning of his administration. He also directed that we pay salaries. The Federal Government has never failed in the payment of salaries and he said we must always pay pensions.”

The disposition of government towards job security for federal civil servants gives an insight into why that sector appears to house workers who are indolent and care less about productivity.

Indeed, guarantees of job security must explain why there is a resistance to implement long-enunciated policies that would ensure fitness of the labour force, enhanced efficiency and productivity.

Nigerians should expect a civil service with a dominant laissez-faire attitude if nothing changes.

The former Imo State Governor, Rochas Okorocha, on January 5, vowed that he would expose the atrocities of Governor Hope Uzodimma in the state.

The ex-governor in a statement also described Uzodinma as an embarrassment to the state.
He said: “The whole world was expecting the names to be mentioned but he ended up trivialising the matter. You see if the abduction of Uche Nwosu was successful he would have announced Nwosu as a sponsor. I will expose Uzodimma’s evil plot in Imo. I have come back home and we will now know the truth of those behind these killings.”

The ego war between Okorocha and Uzodinma, which has stretched for three years, probably explains the worsening insecurity in the state, and why there has been serious neglect of governance.

Unless there is a simmering of the crisis, Imo is unlikely to draw from the gains of any democratic experiment, leaving ordinary citizens in greater suffering.

QuickRead: APC’s divided house. Four other stories we tracked and why they matter

QuickRead: Buhari on stolen NDDC funds. Four other stories we tracked and why they matter