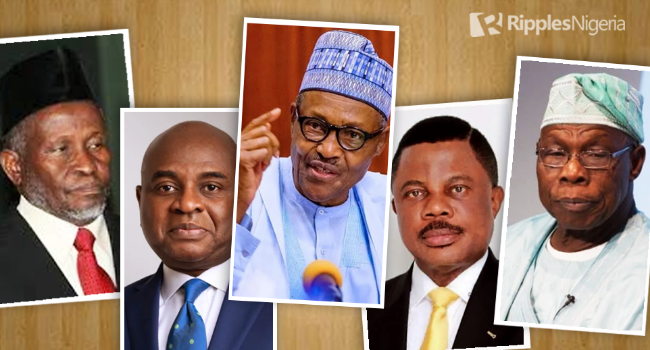 This and four other stories were among the major talking points last week.

Justice Taiwo Taiwo, on November 26, gave a far reaching order on the activities of bandits. She said: “The activities of Yan Bindiga and Yan Ta’adda groups and other similar groups constitute acts of terrorism that can lead to a breakdown of public order and safety and is a threat to national security and the corporate existence of Nigeria.”

The designation of bandits as terrorists will, if the government is sincere, provide a harsher legal instrument to bring perpetrators of wanton crimes to justice and, perhaps, build international coalitions against them.

The development may also end the insinuations that the government has been pampering the bandits after refusing to heed previous calls for the designation of the mass murderers as terrorists.

It remains to be seen how the rebranding effort impacts the polity as similar initiatives appear to have worsened already bad situations in the past. It is predictable, therefore, the move may push the organizations underground and cause a festering of the malaise unless the root causes are dealt with.

Mbeki had said: “The constitution on whose basis President Obasanjo was elected prescribed a two-term limit for the head of state, and since he [Obasanjo] had been elected for the second time, this meant that he would end his term in 2007.

“But some time before, in 2005, a campaign began in Nigeria to amend the constitution to allow for three presidential terms. This developed to a point that the draft of the proposed amendment had been presented to the Nigerian parliament as papers.”

The ex-South African leader’s remark further exposes the lies on the failed tenure elongation plot. First, it rubbished the denial by the former President that he did not nurture the idea of staying in office beyond the mandatory two-terms stipulated in the constitution.

Mbeki’s statement not only enriches the conversations around the failed third term plot, it also shows that there is a significant clan of African leaders willing and ready to challenge their peers on the sickening sit-tight syndrome and general poor leadership in the continent.

The Economic and Financial Crimes Commission (EFCC) on November 24 confirmed that the outgoing Anambra State Governor, Willie Obiano, has been placed on its watchlist.

Read also: QuickRead: Buhari’s promise on Kanu. Four other stories we tracked and why they matter

In a letter addressed to the Comptroller General of the Nigeria Immigration Service (NIS), the EFCC requested the Service to place Obiano on a watchlist and inform it anytime he is travelling out of the country.

However, the Anambra government in a statement issued by the state’s Commissioner for Information and Public Enlightenment Don Adinuba, accused the EFCC of subjecting the governor to a media trial.

The EFCC’s decision to place Obiano on its watchlist, if not a pretentious vindictive move, must be seen as part of Buhari government’s determined effort to deal with the issues of endemic corruption no matter whose ox is gored.

If the anti-graft agency fails, after all the noise making, to offer reasons for the Obiano hunt and bring him to justice, then it would be safe to conclude that the pursuit was simply driven by political vendetta.

The African Democratic Congress (ADC) presidential candidate in the 2019 election, Kingsley Moghalu, said on November 22 the party and others are holding talks on the formation of a third force in a bid to end the dominance of the All Progressives Congress (APC) and the Peoples Democratic Party (PDP) in the country.

Moghalu, who shed light on why he dumped the Young Progressive Party (YPP) for the ADC said: “I joined ADC because they aligned with my values. ADC is planning to merge with other parties to form a mega party to battle with the APC and the PDP, early next year if talks are successful.”

The proposed third force shows interesting gaps in the political space and the opportunity for the country’s political system to continue evolving on the strength of sound ideologies.

There’s no denying the fact that Nigerians have become weary of the two largest parties in the country and cannot wait to see their back, beginning from 2023.

However, Moghalu’s dreams may amount to mere sabre-rattling if ADC does little to perfect its structures and mobilize voters on the vision of the new movement.

President Muhammadu Buhari on November 23 suspended indefinitely the inauguration of the newly constituted board of the Nigerian National Petroleum Company (NNPC).

The Secretary to the Government of the Federation, Boss Mustapha, who announced the development in Abuja, said: “President Muhammadu Buhari has directed the immediate suspension of the inauguration of the newly constituted Board of the Nigerian National Petroleum Company Limited (NNPC) scheduled for Wednesday 24th November 2021 until further notice.”

The development may not be unconnected with the uproar that trailed the appointment of some individuals into the NNPC board.

It, therefore, suggests that the President is contemplating the withdrawal of some nominees over concern about their inclusion and to a larger extent the agitations by groups for greater representation in the board of the state-owned oil company

QuickRead: Lagos White Paper on #ENDSARS. Four other stories we tracked and why they matter

QuickRead: Buhari’s promise on Kanu. Four other stories we tracked and why they matter