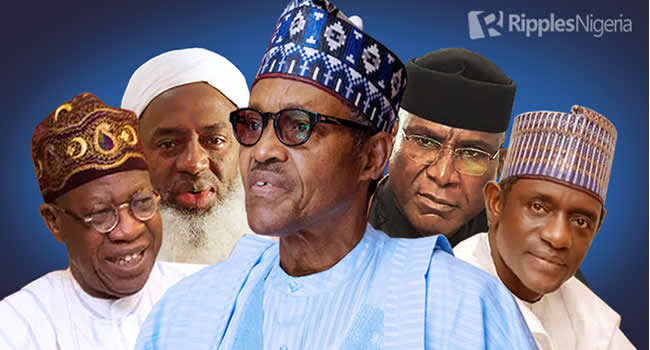 The week in review has been one full of intrigues, starting with President Muhammadu Buhari’s ‘Civil War’ comment which many feel has further polarized the country along ethnic lines.

The week also went down with the suspension of micro-blogging platform, Twitter, by the Nigerian government in an announcement made by Minister of Information, Lai Mohammed.

Three other stories joined to make the past memorable and we hope you will enjoy the offering.

“There must be zero tolerance for all those bent on destroying our country by promoting crime and insurrection! …Many of those misbehaving today are too young to be aware of the destruction and loss of lives that occurred during the Nigerian Civil War. Those of us in the fields for 30 months, who went through the war, will treat them in the language they understand,” Buhari had said.

Why it matters
Considered ill-timed, the vexatious and insensitive comment aimed at a region whose people have often cried out over perceived marginalization shows a president in acute lack of emotional intelligence.

The unfortunate remarks subtly vindicate many Nigerians who have come to believe that the president lacks a clear understanding of the sensitive issues being raised by people from that region or is determined to sit on old prejudices.

The comments raise serious concerns too over purported plans to militarize the region, an action that would deepen already existing fault lines and heighten tensions in the country.

On June 4, the Nigerian government announced the suspension of micro-blogging site, Twitter.

Announcing the suspension, Minister of Information and Culture, Lai Mohammed, in a statement issued by his media aide, Segun Adeyemi, said the action “became necessary due to the constant undermining of Nigeria’s sovereignty by Twitter.”

Why it matters
The Twitter ban speaks to mounting fears that the government has become increasingly jittery, as dissatisfaction over poor governance envelopes the land.

It is also a warning sign that the Buhari-led administration will do all it could to suppress dissenting voices even if the strategy is unpopular.

On June 3, the ruling All Progressives Congress (APC) vowed that perceived “plots by some disgruntled Nigerians to bring down President Muhammadu Buhari’s government would fail.”

The Secretary of the APC Caretaker/Extra-Ordinary National Convention Planning Committee, Senator John Akpanudoedehe, had said, among others, “Plans to bring down the government of President Muhammadu Buhari will fail. Some disgruntled elements are trying to blackmail and discredit this government with the aim of bringing it down.

“…Those who are heating up the polity so that people will believe there is insecurity are organising to bring down the government of the APC. We will bring them to book Insha Allah.”

Why it matters
APC’s hunt for perceived enemies, once again, shows up as a diversionary tactics intended to take attention away from its failings as a government.

By refusing to admit its own failures, the ruling party resolves to play the ostrich, burying its head in the sands while the everyday challenges of insecurity and poverty grip the country.

As has been argued, the country might risk descent into a fascist state as human rights are curtailed in search of known and unknown critics of the administration.

On June 4, Islamic cleric and scholar, Sheikh Ahmad Gumi, raised another call for a soft landing for bandits who have been terrorizing most part of the country.

Why it matters
Gumi’s incessant romance with bandits, and often disingenuous proposition, raise fresh posers as to what he really wants. Indeed, the gaps in his recommendations query his contextual understanding of the surrounding issues of banditry and criminality.

His various interventions, even though suspect, comes as a direct indictment on the Buhari administration which has failed woefully to find enduring solutions to rising insecurity.

By refusing to leverage Gumi’s network with bandits, the Buhari-led government also shows itself as lacking the will to practically end various armed conflicts in the country.

On June 4, the Senate gave the strongest indication yet that a new Constitution cannot be produced for Nigerians since the “1999 Constitution does not include a clause on how to produce a fresh document.”

Why it matters
It is evident, from the postulations of the Deputy Senate President, that the National Assembly, as presently constituted, should not be expected to meet the yearnings of Nigerians on the matter of a new constitution.

What it, therefore, means is that a loud clamour for a new constitution may persist in the months and years ahead with its attendant implications for tension in the land.

And, as many have argued, it would seem that the on-going constitution amendment exercise across the country would turn a mere jamboree and an exercise in futility.

QuickRead: That snide remark by Buhari on ‘Lagos’

QuickRead: Buhari fails to spring surprises. Four other stories we tracked and why they matter