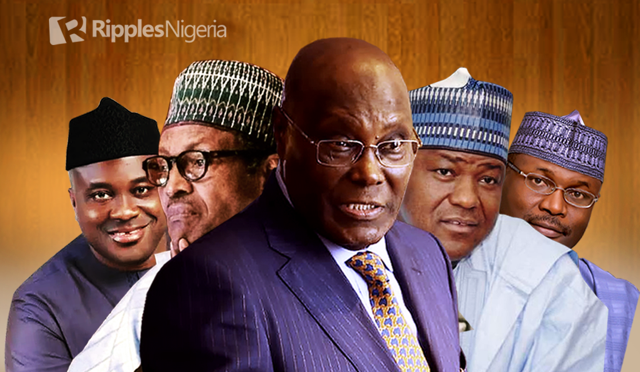 President Muhammadu Buhari last week accused the governors of stealing the allocations of local councils in their states.These and four other stories we tracked dominated public discourse last week.

On December 1, the president accused the state governors of treating the local councils in the states unfairly.

Buhari, who spoke at an event for members of the senior executive course 44 (2022) of the National Institute for Policy and Strategic Studies (NIPSS) at the Presidential Villa in Abuja, said: “It is unfathomable that some state governors would collect money on behalf of council areas, and only remit half of such allotment to the council chairpersons.
“If the monies from the federal government to state governments is N100 million, let’s put it at N100 million. But N50 million will be sent to the chairman with a letter that he will sign that he received N100 million.”
“The governor will pocket the balance and share it with whoever he wanted to and then the chairman of the local government will say how much he must pay as salaries.”

The president’s remark speaks to the mismanagement of the local government system by the governors.

The systematic decay and poor performance of leaders at the local government level have left many to question the existence, and by extension, the usefulness of the local councils which are expected to bring governance closer to the citizens.

2. Conviction of YPP candidate for fraud

He was arraigned by the Economic and Financial Crimes Commission (EFCC) for receiving bribes of 12 cars valued at N254 million from Jide Omokore, an associate of former Minister of Petroleum Resources, Diezani Alison-Madueke, during his tenure as a commissioner in the state.

In her ruling on the matter, the judge said: “The prosecution has sufficiently proved its case against the defendant.
“The defendant is hereby convicted and sentenced to 42 years in prison for abusing his position.”

READ ALSO:QuickRead: Attack on Atiku’s campaign team. Four other stories we tracked and why they matter

The conviction has again confirmed that corruption remains endemic and a huge stumbling block to the meaningful development of Nigerian society.

It also shows that the law is no respecter of persons, therefore, the onus is on the anti-graft agencies to spread the dragnet further to unravel a system-wide malaise that has eaten deep into the fabric of our society.

The wave of attacks on the Independent National Electoral Commission (INEC) offices increased last week with the commission’s facilities in Ebonyi and Imo States torched by hoodlums.

The INEC National Commissioner and Chairman, Information and Voter Education Committee, Festus Okoye, confirmed the attack on the commission’s Imo State office in a statement on Thursday night.

He said: “The Resident Electoral Commissioner (REC) for Imo State, Prof. Sylvia Uchenna Agu, reported that our office in Orlu Local Government Area was attacked. The incident occurred yesterday Thursday 1st December 2022.
“The damage would have been more extensive but for the quick response of the Nigeria Police which has deployed its personnel to the site.

The recent attacks on the INEC facilities highlight the threats posed by non-state actors to the conduct of the 2023 general elections.

Beyond its usual rhetoric, the time has come for the government to come up with additional measures to foil threats by criminals who had publicly declared their readiness to sabotage the elections.

4. PDP on the attack of its members

The Peoples Democratic Party (PDP) on December 2 demanded the arrest and prosecution of those behind the incessant attacks on its members across the country.

Members of the party had been reportedly attacked during campaign rallies in Kaduna, Gombe, and Borno States.

The spokesman of the Atiku/Okowa Presidential Campaign Organization, Kola Ologbondiyan, who made the call at a programme in Abuja, said: “The National Security Adviser (NSA), Gen. Mohammed Monguno, must reassure Nigerians in the battle against political thuggery by intervening to ensure that those who attacked our rallies in Kaduna, Borno, and Gombe are brought to justice.
“Our Campaign commends the NSA for his stance against state governors as well as politically intolerant politicians who engage in mobilizing thugs to attack the campaigns of rival political parties as witnessed in the attack of the PDP presidential campaign rallies in Kaduna, Borno, and Gombe States.”

The number of violent attacks that had been recorded since the onset of the 2023 political campaign suggests the players in the nation’s political space are not ready to wean themselves off the do-die attitude that is deeply engrained in our political system.

This mentally has reinforced the call for a tweak of the constitution through honest dialogue to make political offices less attractive and dissuade self-serving individuals from aspiring for leadership positions in the country.

The Forum of Christian and Muslim Political Leaders from the 19 Northern states and the Federal Capital Territory (FCT) on December 2 adopted Peoples Democratic Party (PDP) presidential candidate, Atiku Abubakar, as their consensus candidate for the 2023 general elections.

The forum announced the decision in a communiqué issued at the end of its meeting at the Atiku Abubakar Hall of Shehu Musa Yar’Adua Centre in Abuja.

A former Speaker of the House of Representatives, Yakubu Dogara, is one of the group’s promoters.

The communiqué read, among others: “Forum, therefore, adopted the PDP and the Atiku/Okowa presidential ticket as the right ticket to support in the 2023 presidential election as it addresses all the concerns of inclusiveness, fairness, and national cohesion.

The endorsement of the former vice president and Dogara’s role reinforces the claim that politics is an interest-driven game.

Quickread: Military’s claim on pressure from politicians. Four other stories we tracked and why they matter

QuickRead: Court orders forfeiture of N775m, properties linked to ex-AGF. Four other stories we tracked and why they matter