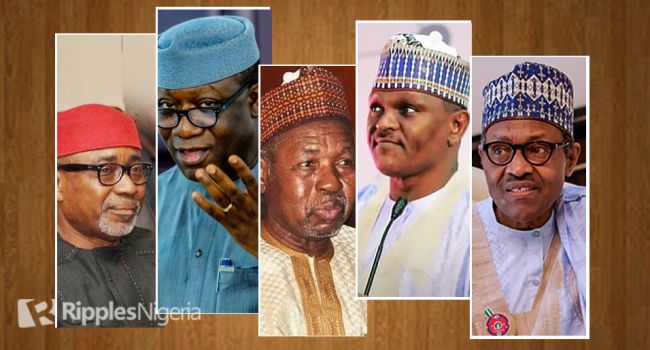 President Muhammadu Buhari last week promised to recover every kobo stolen from the Niger Delta Development Commission (NDDC), as well as punish all individuals indicted for fraud in the agency.

This and four other stories made the headlines in the last week of 2021.

On December 30, the President, while commissioning the NDDC Prototype Hostel at the University of Uyo, expressed regret that the special development fund for the Niger Delta was squandered by a few individuals for more than 20 years.

He said: “Therefore, going forward, we shall ensure every recoverable kobo, is recovered for use in service of the people of this region, and those found culpable shall face the law.
“The Niger Delta Development Commission needs to demonstrate that it can achieve the objectives it was conceived for and make its impact felt all over the Niger Delta region.”

Repeated promises without appropriate and timely actions clearly show that the Muhammadu Buhari-led administration lacks the will to deal with the rot in NDDC.

This position is accentuated by the politicization of the entire NDDC probe which has seen a seeming disregard for the law setting up the interventionist agency, and the unfathomable rise of the Minister of Niger Delta Affairs, Senator Godswill Akpabio, as a judge in his own case.

2. Al-Mustapha on sponsors of insecurity

Al-Mustapha, who featured in a programme on the Hausa Service of Voice of America (VOA), said, among others: “It is high time that every patriotic Nigerian, anyone who has Nigeria, Africa, or the entire world at heart to stand up and make a personal contribution. Things are not moving as expected.
“There are people spending their money to cause crisis and it appears they are succeeding.”

Al-Mustapha’s treatise is a sad reminder that the Nigerian government is yet to fully unmask the forces stoking rising instability in the country and threats to its unity.

It further exposes the hypocrisy of government, as the Buhari administration has variously deceived citizens into believing that it had a dossier of sponsors of terrorism only to chicken out from naming them when it mattered most.

The Katsina State Governor, Aminu Masari, on December 29 enjoined the people of the state to acquire weapons in a bid to defend themselves against bandits and other criminals in the state.

Read also: QuickRead: Increase in police salaries. Four other stories we tracked and why they matter

The governor’s remark suggests that the Nigerian government can no longer be relied on to keep the citizens safe.

But it is easy to see through Masari’s hypocrisy as he feigns ignorance of the law that forbids Nigerians from owning the sort of arms and ammunitions that can challenge bandits and terrorists.

Beyond pointedly insinuating that the ruling All Progressives Congress (APC) had failed woefully in the area of security management, Masari’s disposition is an invitation to anarchy, given the absence of enabling laws to empower citizens for self-defence.

The Ekiti State Governor, Kayode Fayemi, on January 1 expressed optimism that President Buhari coud effectively tackle the country’s security challenges before the expiration of his tenure in 2023.

Speaking on national television, he said: “If we can destroy that monster of insecurity, the opinion in the country will change dramatically. If we decide to go after these people without too much attachment to human rights and issues that may come up from the international communities. These people are not ghosts.”

Again, the claims made by Governor Fayemi bring to fore the colossal failure of the ruling party to deliver on the primary task of protecting lives and property.

With time running out for the President to deliver on one of the major thrusts of his campaign promises, Fameyi’s hopes may just amount to wishful thinking.

The probability of success seemingly evaporates in the face of perceived unseriouness, lack of political will and absence of a well coordinated security architecture.

Abaribe, who addressed journalists after a grand civic reception organised in his honour in Aba said, among other: “We respect constituted authority. I believe my future political ambition should be made known to my governor who is the number one citizen in my state.
“So, what I’m telling Ndi Abia is that they should expect Mmagha Ndigbo as their next governor in 2023.”

However, in throwing his hat in the ring, Abaribe is set to disrupt the Abia charter of equity, an unwritten zoning arrangement that calls for rotation of power among the senatorial enclaves as it relates to the governorship position.

This potentially disruptive move is heightened by the fact that Senator Abaribe hails from the same senatorial zone as the incumbent Governor, Okezie Ikpeazu.

Knowing the critical place of zoning in the country’s political culture, Abaribe may, perhaps, be playing to position himself strongly for power negotiations.

QuickRead: Bandits get terrorists’ badge. Four other stories we tracked and why they matter

QuickRead: Increase in police salaries. Four other stories we tracked and why they matter