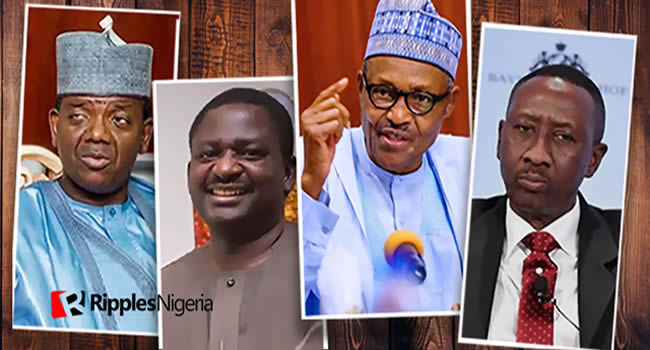 There was a sense of déjà vu when female students of the Government Girls’ Secondary School, Jangebe, in Talata Mafara local government area of Zamfara State were kidnapped, with many wondering whether the girls would be rescued.

But three days later, there was a sigh of relief when the girls were released with President Muhammadu Buhari pledging that such incidents will never happen again.

The past week also threw up some talking points, especially with the security situation in Zamfara.

Enjoy these and other stories that generated a buzz that kept tongues wagging.

On February 28, President Buhari gave Nigerians assurance that the abduction of students in the country would never happen again under his watch.

Minister of Aviation, Hadi Sirika, who led a high-powered Federal Government delegation to sympathise with the people and government of Zamfara over the abduction of the Jangebe Girls said, on behalf of the President:

“President Buhari is saddened by the abduction of the students from Jangebe and reassures you that the government has all the resources and wherewithal to contain these criminals.

“The federal government will continue its partnership with Zamfara State government and its citizens in resolving the security challenges facing the state.”

The populace must be forgiven for habouring misgivings over the pledge by President Buhari to ensure that the Zamfara kidnappings will be the end of such unfortunate incidents in the country.

Subsequent events had proved them right. The abductions and killings have continued unabated, even in the face amnesty granted ‘repentant’ bandits.

It is clear that the government would have to do more to address the deficit trust among a populace whose confidence in the leadership has sagged considerably.

On March 1, Zamfara State Governor, Bello Matawalle, said Nigerians would be shocked if he revealed the identity of those behind the abduction of over 300 female students of the Government Girls’ Secondary School in Jangebe, Talata Mafara local government area of the state.

While playing host to prominent Emirs who paid him a visit, Matawalle said:

“As we await the arrival of the released kidnapped students of GSSS, Jangebe, I want to inform you that there are many revelations in relation to the abduction of these students.

“Many people will be surprised to hear those people behind the abduction of these innocent children.

“They are not comfortable with the progress I am getting as a result of my peace initiative and they want to do all they can to sabotage my efforts.”

Nigerian politicians have the proclivity for playing on the intelligence of the citizenry via obfuscation of facts.

And Matawalle once again, succeeded in playing these mind games that politicians before him found quite convenient to employ.

What Nigerians clamour for is that Matawalle should open up and reveal those behind the abduction and quit playing to the gallery.

By naming those behind the kidnappings, he would have raised hopes of the victims and their families getting a closure and helped bring the masterminds to book.

Also on March 1, Special Adviser on Media and Publicity to the President, Femi Adesina, gave Buhari a pass mark on his acclaimed rapid response to abduction of students in the country.

Adesina, who was a guest on a Channels Television programme, ‘Politics Today’, said the administration deserves credit for constantly responding promptly to students abduction and other security challenges in the country.

“We had Kagara, they were recovered. We are working on Jangebe in Zamfara now. You look at the end results.”

READ ALSO: &#8216;Nigerians will continue to look up to you for wisdom, statesmanship,’ Buhari tells Obasanjo
Why it matters

While the Buhari-led administration gets some credit over the rescue of kidnapped students in Katsina, Niger and Zamfara, this should be juxtaposed against the descent into near-anarchy in the Northern region where life has become more brutish and short.

As many have argued, negotiating and paying ransom to bandits and terrorists has placed the government in a weak position, quickening the pace to what critics consider a failed state.

On March 2, Buhari showed he can also bite when the government announced a complete ban on mining activities in Zamfara, while also declaring the state a “no-fly zone’’.

“The President has approved, based on our recommendations, the imposition and enforcement of a ban on all mining activities in Zamfara with immediate effect until further notice.

“He has also approved that Zamfara State should be declared “a no-fly zone’’ with immediate effect.”

The imposition of a no-fly zone in Zamfara State, though warmly welcomed by political observers, speaks to how the country’s airspace has been compromised.

Official revelations that helicopters were being used to enhance the illegal trade in gold and importation of weapons should serve as a source of great concern that intelligence gathering remains the biggest handicap in the fight against banditry and terrorism.

Therefore, to believe that the ban would deter easy access to sophisticated weapons by criminals would be to underestimate how porous the nation’s borders have become.

5. Almost every Nigerian is poor

Also on March 2, a release by Knight Frank Wealth Report gave Nigeria a damning verdict that it would take an average Nigerian the sum of N28.7m, or $70,000, to be considered wealthy by any standard.

The report which used the N30, 000 minimum wage as its benchmark said it would take an 18-old working for 97 years to get to that figure if he saves all of his monthly salary.

The damning report has once again showed that Nigeria is a cauldron of contradictions where there is abundance of wealth while a majority of the masses live in abject poverty.

It also shows that the government is not doing much to uplift the poor masses by creating an enabling environment for poverty alleviation.

A wealthy nation filled with many poor people is a ticking bomb unless the politicians are ready to redress the ills which created this huge gap in the first place.