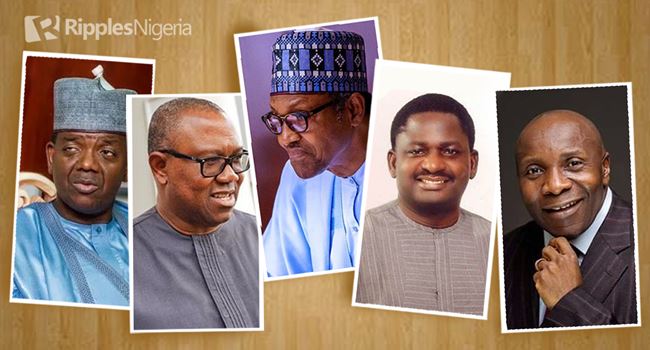 In the face of lingering insecurity and ethnic conflagrations in different parts of the country, President Muhammadu Buhari, once again, reiterated the commitment of his leadership administration to ensure the obliteration of the malaise across the country.

Buhari’s assurance, which seems to be on a repetitive mode, got many Nigerians talking and wondering when he would keep this promise of wiping out insecurity in the nation.

We tracked this and four other stories that got Nigerians actively engaged over the past week. Enjoy!

On August 13, three days after Amnesty International claimed that bandits had killed 112 persons and abducted 160 others in one month in Kaduna and Plateau States, President Buhari was quoted as saying the following:

“Although the nation is still grappling with the challenges of terrorism, banditry, kidnapping, farmers and herder clashes, and militancy, the responses by my government and security agencies in tackling these threats have been strong, determined, and robust in order to enhance the security of lives and property of Nigerians.”

In admitting the embarrassing challenge of insecurity, and unending attacks by terrorists and bandits, the President reminds Nigerians that a return to peace and stability may take some time to be accomplished.

The claim to any robust response to insecurity falls flat in the face of the pains and agonies experienced by citizens, and makes the President seem far removed from the reality while relying on what his henchmen in the Presidency feed him with.

The objective conditions would, therefore, suggest that citizens must brace for for all sorts of propaganda as the state and its enemies unleash various claims on Nigerians.

On August 9, the National Secretary of the APC Caretaker and Extraordinary Convention Planning Committee, Senator James Akpanudoedehe, reminded Nigerians of the failings of the Peoples Democratic Party (PDP) in managing the country’s security.

Udoedehe had said, among others: “The PDP apparently chooses to forget how the same insecurity it now desperately seeks to politicise, metamorphosed and festered under its watch which ultimately led Nigerians to overwhelmingly reject it in the 2015 elections through their votes.

Read also: QuickRead: Afenifere slams IBB. Four other stories we tracked and why they matter

“Lest we forget, monies meant to buy arms to fight insurgents were stolen and diverted to private pockets of PDP members and their cronies while Boko Haram seized Nigeria’s territory and hoisted their flags.

Against the backdrop of President Buhari’s pledge to ramp up the battle against insecurity, it is deceitful for the ruling APC to lay claims to any improvements in the area of internal security, peace and stability.

More than six years into its administration, the resort to blame games continue to provide hints about APC’s unpreparedness to lead.

It also an indication that the party, rather than assuage the grievances of Nigerians, has conveniently chosen to forget that it was elected into power to provide transformational leadership and not dwell on excuses.

On August 9, former Governor of Anambra State, Peter Obi, threw his weight behind former military president, Gen. Ibrahim Badamosi Babangida (IBB), wherein he said that Nigerian leaders today were more corrupt now than they were during the military era.

Obi had said:
“I had a meeting with Gen. Ike Nwachukwu (rtd) and he told me that military governors then didn’t receive up to 10 per cent of what we received as governors. So, definitely corruption, and of course, as you know is the biggest negatively impacting situation in our country today because corruption kills entrepreneurship.”

The key takeaway from IBB’s posturing and the support from Obi is that corruption remains endemic and a huge stumbling block to meaningful development of the Nigerian society.

If the argument of both senior citizens is anything to go by, it would suggest then that no progress has been made in the anti-corruption war despite public claims by the incumbent administration.

Sadly, Nigeria appears condemned to a culture of corruption, with all the attendant fears that it would only continue to yield a vicious cycle of poverty, underdevelopment and political instability.

On August 13, the Presidency, in a bid to douse the brouhaha raised over the visit of President Muhammadu Buhari’s to the National Leader of the All Progressives Congress (APC), Asiwaju Bola Ahmed Tinubu in the United Kingdom, said the visit had nothing to do with the 2023 presidential ambition of the former Lagos State governor.

“The visit of the President to Tinubu was just an ordinary coincidence and no meanings should be read into it. The President still has two years in his tenure of office, so for him to start supporting somebody now will just be jumping the gun,” a top media aide of the President, Femi Adesina, said.

The London meeting between Buhari and Tinubu, coming on the heels of medical checkups, is indicative of the low level confidence both men have in the Nigeria healthcare system.

It would also be trite to argue that both men may have seized the opportunity of their coincidental presence in London to reassure countrymen, through photo ops, that the rumours of an existing cold war are unfounded.

Meanwhile, Adesina’s tangential reference to 2023 must be considered a decoy as it is inconceivable that both party leaders could have walked away from that meeting without as much as weighing in on APC’s challenges and the jostle for the soul of the party.

On August 12, Governor Bello Matawalle of Zamfara State, again, proposed dialogue as panacea to banditry and other security challenges bedeviling the country.

“Stakeholders were invited who were political leaders, traditional institution and other security heads. We put heads together and that is why we initiated the issue of dialogue and reconciliation with the bandits and this yielded a lot of results in the state,” he said.

Given the current state of affairs in Matawalle’s Zamfara State, it is, without doubt, that the Governor was trading half truths about how effective dialogue has served as a strategy in containing terrorists, bandits and criminals.

Unassailable facts, indeed, suggest that Zamfara State has become the hottest bed for banditry in the country.

What Matawalle failed to tell Nigerians, therefore, is how past dialogues had gone to bring peace to his State and how the Nigerian state had utterly failed to protect its citizens.

The dilemma, it is feared, might persist as a coordinated strategic response might not be near in the horizon.

QuickRead: PIB becomes PIA, Atiku’s hat in the ring again. Three other stories we tracked and why they matter

QuickRead: Afenifere slams IBB. Four other stories we tracked and why they matter