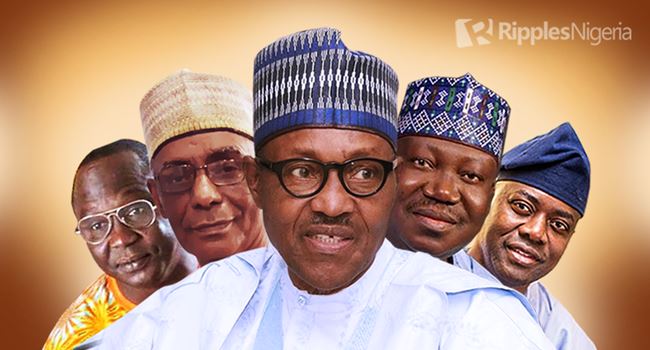 The burden of responsibility thrust President Muhammadu Buhari and Senate President Ahmad Lawan on the centre stage last week. While Buhari angered the populace by supervising a jerk in the prices of petrol and electricity, Lawan was caught talking tough on how his office will contain the perceived excesses of the President’s appointees. These and three other stories made our pick for review of major political events last week.

The import of these stories can’t be missed.

Nigerians were ushered into the new month of September with two ‘gifts’ from the President Muhammadu Buhari-led Federal Government. First, was the National Electricity Regulatory Commission (NERC) approval of the implementation of the new electricity tariff hike from Tuesday, September 1; and second, the Petroleum Products Marketing Company (PPMC) increase of the ex-depot price of petrol to N151.56 per litre on Wednesday, September 2.

The two hikes, chiefly the electricity tariff increase, came despite the National Assembly plea that their implementation be suspended till the first quarter of 2021 in order not to worsen the devastating effects of the COVID-19 pandemic on the nation’s economy.

The seeming harsh decisions taken by the Buhari-led administration are a painful response to what can best be described as an economy in free fall.

For too long, the country’s leaders had ignored basic economic fundamentals, choosing instead to enable subsidy regimes that have created more dysfunctions in the system.

The revulsion to the price hikes, though expected, clearly indicates that the citizens do not trust the leadership well enough to implement reforms transparently, sincerely and with accountability.

A few unanswered questions by the government creates even worse doubts. What manner of deregulation is expected if the restructuring efforts are not accompanied by liberalization? Indeed, what is the sense in having the Nigeria National Petroleum Corporation (NNPC) play a dual role of regulator and player at the same time? And, what about the continuous existence of the Petroleum Equalization Fund (PEF) that still offers some players in the system access to subsidy with all its abuses.

The same ills befall the power sector where years of pretentious restructuring has led no where. The entire value chain remains enmeshed with one crisis or the other. The unwelcome reactions to the hike in electricity tariffs are, therefore, a protest of government’s insincerity and lack of transparency in the implementation of a poorly defined power roadmap.

What comes very clear in citizens’ resistance of the September gifts is lack of trust in the real intentions of the Buhari government. This factor is what the administration must urgently address or have its efforts sabotaged, with all the attendant backlash. There are no rewards in robbing Peter to pay Paul, and demanding Nigerians to pay for services not rendered.

The President of the Nigerian Senate, Ahmad Lawan, on Monday, August 31, issued a stern warning to disrespectful appointees of President Muhammadu Buhari, vowing that the National Assembly would not tolerate their misdemeanours any longer.

Disappointed by months of appearing as lame-duck, Lawan’s audacity comes as a relief to many who want to see Nigeria’s democratic institutions strengthened. The National Assembly, in asserting itself in the discharge of its constitutional roles, should not be seen as promoting a call to arms but a patriotic initiative designed to speak truth to power.

However, talk, they say, is cheap. It remains to be seen if the lawmakers will match their words with action as they confront perceived breaches by the executive.

The Northern Elders’ Forum (NEF) on Sunday, August 30, faulted Nigerian Senate’s move to alter some provisions of the 1999 Constitution. It argued that several millions of naira spent by the lawmakers in the past to fund the constitution review process failed to yield any meaningful impact on the lives of Nigerians.

At a press briefing in Abuja, the NEF’s Director of Publicity, Dr Hakeem Baba-Ahmed, who advised the National Assembly to direct its energy and mandate towards convincing President Muhammadu Buhari to effectively tackle the country’s security challenges said:
“Nothing fundamental or of any value has come out of these grand schemes to exploit our collective desire to address our political and economic fundamentals. This National Assembly is also following suit, and it should not be encouraged on this path.”

Emerging opposition to moves by the National Assembly to amend certain aspects of the 1999 Constitution is an early signal that there may be an urgent need to build a stronger stakeholder mentality or have the entire exercise frustrated, and good money washed down the drains.

Rather than attempting to scratch the surface of the problem, which is what the exercise may amount to, a great number of Nigerians are seeking to have a fundamental review of the documents from past constitutional conferences, not only to reassess how the federation is faring in terms of dispensation of equity and justice but also the fundamentals of its economic existence.

The water bill controversies continued last week with the Nigeria Labour Congress (NLC) on Monday, August 31, joining many other groups and individuals in Nigeria to reject the alleged return of the bill to the National Assembly.

In a statement by its president, Ayuba Wabba, the NLC said among others, “Information in the public domain has it that the National Assembly leadership is working surreptitiously with vested interests … to pass the bill without due legislative process. Although the National Assembly is constitutionally vested with law-making, we warn against the National Assembly ambushing Nigerians. We equally warn against legislative abuse or betrayal of Nigerians as this is what it will amount to if the bill is passed or caused to be passed without public engagement and scrutiny. Already, the sentiments expressed against this bill are too grave to be brushed off.”

The rejection of the water bill at the public hearing in 2018 does not obliterate the right of its sponsor(s) to rework it and return it to the national lawmakers. The concern, however, should be the motive behind the bill as its sponsors are said to be working secretly to have it passed without due legislative process.

Democracy requires that those who are opposed to the bill should ensure that they and their representatives at the National Assembly are vigilant not to allow the bill passed surreptitiously. There is no denying the fact that lobby is an essential element in the democratic process, as the minority would always have their say while the majority will have their way.

Oyo State Governor, Seyi Makinde, last week suggested that those who ruled the State in the past were frauds and that they were never going to rule the state again.

The governor, who spoke when he flagged off the second phase of the Light-Up Oyo Project in Ogbomoso said, “Let me state this clearly if I will not seek re-election, I am sure that Oyo State will never, again, be in the hands of charlatans.”

Governor Makinde, like many others of his ilk, are given to unnecessary rhetorics. His thought process is common with many Nigerian politicians. It is foolhardy to assume that Nigerians will continue to fall for familiar gimmicks wherein the President/Governors want to play ‘Lord’, as complainant, prosecutor and judge in their own cases.

If the country is intent on building enduring institutions, then a recourse to media trials must be discouraged. And, in the case of Makinde, if he is strongly convinced that his predecessors had been frauds, the courts are there to mediate.

This same measure is the minimum conduct expected of all in positions of authority, the President inclusive.