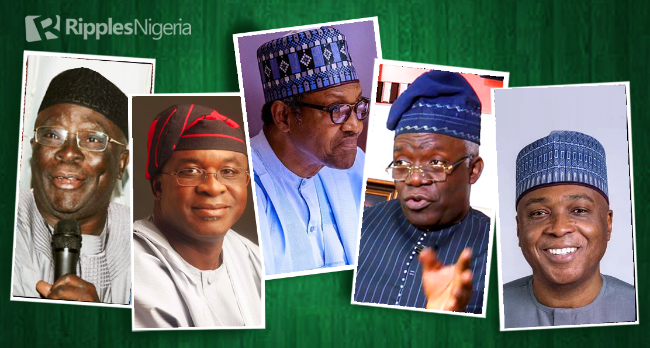 This and four other stories we tracked made the news headlines last week.

On April 29, the President warned, during an Iftar dinner with members of the Diplomatic Corps in Abuja, that he would use every legitimate means to protect the votes of Nigerians next year.

He said: “Those planning to rig the forthcoming elections should think twice because I intend to resolutely protect and defend the sacred will of the Nigerian people, to be expressed through the ballot box.”

The President’s remark underscores the need to bequeath a legacy of transparent elections to the country.

However, it needs more than threats to change the culture of impunity that has become the main feature of Nigeria’s electoral process since 1999, with politicians constantly evolving strategies to manipulate the process to their advantage.

All said, the Buhari administration must ensure total compliance with the Electoral Act and provide the necessary support in its bid to conduct credible elections next year, including the freedom to prosecute election offenders.

The Senior Advocate of Nigeria, Femi Falana, on April 28 explained why former President Goodluck Jonathan is not qualified to run for the presidency in 2023.

In a statement he personally signed, the human rights activist said Jonathan could not contest the 2023 presidential election by virtue of Section 137 (3) of the 1999 Constitution (as amended).

He said: “The former President is disqualified from contesting the said election by 137 (3) of the Constitution of the Federal Republic of Nigeria, 1999 as amended which provides as follows: ‘A person who was sworn in to complete the term for which another person was elected as President shall not be elected to such office for more than a single term.”

The ongoing effort to thrust the ex-President into the 2023 presidential race has further confirmed that politics is an intricate game, particularly in Nigeria where there are no permanent friends or permanent enemies but only permanent interests.

It baffles the imagination that the man that was ridiculed and blamed for everything that went wrong during his reign has suddenly become the beautiful bride and courted by everybody.

This, therefore, shows the dearth of quality options in the system or an orchestrated attempt by some individual to set Jonathan up for ultimate disgrace and damage his brand after becoming an internationally respected elder statesman for his peaceful handover of power to Buhari in 2015.

Read also: QuickRead: Afe Babalola’s demand for interim govt. Four other stories we tracked and why they matter

The Chairman of the PDP Presidential Screening Committee, David Mark, who confirmed the development to journalists at the end of the screening exercise in Abuja, was however silent on the identities of the disqualified aspirants.

He said: “The committee screened 17 aspirants today. However, two aspirants lost out because they didn’t meet the requirements set by the party.”

Disqualification of aspirants on the eve of elections is not an usual practice the world over.

Hiding the identities of the disqualified candidates, however, suggests that there could be much more to the sanctions. From the grapevine, it is gathered that one of the two candidates had instituted a legal case against the party on the ground of its failure to pronounce a position on the zoning principle.

It may be safe to speculate, therefore, that the unfolding intrigues could be an attempt to keep the hawks pushing for power shift to the southeast in check.

The former Senate President, Bukola Saraki, said on April 26 that the time had come for the North-Central to produce the country’s next president.

Saraki, who addressed the Peoples Democratic Party (PDP) delegates from Plateau State in Jos, said: “…For many times and many years, we, in the North- Central, have worked hard, we struggled, used our efforts, used our money, used our energies to support other people to lead.
“Everybody, who had become President under this great party, got the seat because of our massive sacrifices.
“We have now resolved that it is time for others to vote for us in 2023.”

The ex-Senate president’s remark further polarises the party along ethnic lines with some aspirants pushing for zoning of the ticket to the south and others to the core north.

With the party yet to make up its mind on the 2023 presidential ticket, it raises the bar of tension and casts some doubt on its readiness to seize power from the All Progressives Congress (APC) next year.

Despite the aspirants’ assurance to stay with the party irrespective of the outcome of this month’s presidential primary, nobody should be surprised if the party is hit by a gale of high profile defections at the end of the exercise.

The pan Yoruba socio-political organisation, Afenifere, on April 26 renewed its call for the zoning of the presidency to the South-East in 2023 in the interest of justice and fairness.

The Afenifere leader, Ayo Adebanjo, who made the call at the Greater Nigeria Conference in Abuja, described as “awkward,” campaigns by presidential aspirants from the South-West.

Adebanjo said: “I only like to point to the fact that they are just deceiving you. All that you are hearing that they (the north) are supporting the South-West is an element of deceit to deprive you, to be able to rule you. They don’t like anybody!
“Now that it is the turn of the Igbo, they are propounding a new theory: it must be based on merit and all that. If it is the question of merit, if it has been based on merit till today, till Kingdom comes, the Igbo alone will produce the president.”

The continuous clamour for application of the zoning principle highlights the increasing loss of faith in a structure that tends to confer undue advantage of political power to a certain section of the Nigerian society.

The promotion of ethnicity and other primordial considerations above merit deepens the fault lines and explains why the country’s leadership recruitment process remains a major challenge.

With issues of injustice and inequity staying unresolved, Nigeria’s run to catch up with the rest of its peers in the area of development stands jeopardized.

QuickRead: PDP ditching of zoning principle. Four other stories we tracked and why they matter

QuickRead: Afe Babalola’s demand for interim govt. Four other stories we tracked and why they matter