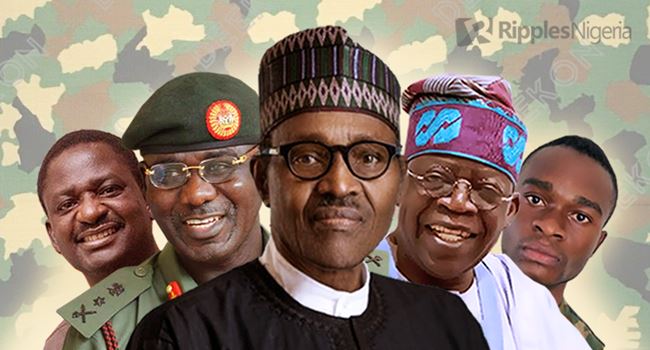 Some incredible events dominated the political space last week, and the country won’t forget them in a hurry. They were some of the outcomes of the EndSARS protests staged by Nigerian youths to demand an end to police brutality.

Among these outcomes were the arrest of Lance Corporal Harrison Friday, a Nigerian soldier, who asked his colleagues not to kill EndSARS protesters, and the attacks on perceived business interests of one of Nigeria’s best known politicians, Asiwaju Bola Tinubu.

These and three other stories made our pick for special review. Their import for Nigeria’s nation-building efforts cannot be ignored.

The Nigerian Army on Wednesday, October 21 announced that it had arrested one of its own, Lance Corporal Harrison Friday, who advised his colleagues via social media to resist any directives from the Army hierarchy to shoot at #EndSARS protesters.

Harrison, in a video where he was seen wearing a mask, had told his colleagues, “The fight the civilians are fighting is our fight; do not let them (the Nigerian government) use us.”

The piece of advice credited to Lance Corporal Harrison raises both moral and ethical questions regarding the intervention of the Nigerian military in the EndSARS protests.

First, contrary to earlier denials, it would seem that the military high command actually had plans to drag the Army into the fray under the guise of Operation Crocodile Smile.

Secondly, Corporal Harrison may have brought his military career to an end as the protocols do not permit him to willfully incite his colleagues who were being made ready for an operation heavily criticized for being anti-people.

Finally, the case of citizen Harrison presents a litmus paper for civil society to test the laws in defense of perceived injustice. Will the ‘people’s soldier’ be abandoned to his fate or will his case provide a platform to rewrite how the military engages with Nigerians?

Whatever the outcome of citizen Harrison’s travails, it may remain much talked about for its future implications for civilian-military relations.

On Wednesday, October 21, some media houses in Lagos State were set ablaze by supposed hoodlums who attacked and looted several properties in the course of the EndSARS protests.

Two media houses that took a direct hit, a day after soldiers shot at peaceful EndSARS protesters in Lekki, Lagos, were TV Continental, and the Nation Newspapers.

Critics agree that there is more that meets the eye than the reported arson on The Nation newspapers and another sister organisation, TV Continental.

The ‘selective justice’ served on the said media houses can safely be linked to the 2023 presidential ambition of the acclaimed national leader of the ruling All Progressives Congress (APC), Bola Ahmed Tinubu.

First, Tinubu’s towering political influence, backed by the dominant presence of the two media houses, is adjudged the reason a few other aspiring politicians in the State had had their wings clipped. The direct hits are, therefore, perceived as a deliberate move to cage his overbearing control of party politics in Lagos.

The pushing and shoving which culminated in the attacks on Tinubu’s media assets may do little to dissuade him from throwing his hat into the 2023 presidential ring. One of his closest aides and APC chieftain in Lagos, Joe Igbokwe, has admitted this much.

It would seem, therefore, that the shadow boxing witnessed all this while between Tinubu and his challengers has finally hit the streets.

President Muhammadu Buhari on Thursday, October 22, delivered his much-awaited national broadcast on the crisis surrounding the #EndSARS protests. Among others, he said that Nigerians appear to have mistaken his administration’s swift disbandment of the Special Anti-Robbery Squad (SARS) as a sign of weakness.

While warning ‘subversive elements’, he threatened to enforce law and order as best as he could, but also promised to provide empowerment programmes for youths.

In allowing himself to be dragged before speaking to Nigerians, Buhari unknowingly displayed arrogance, giving away the impression of an emperor less bordered about the plight of the people he is leading.

In failing to show empathy, Buhari missed a unique opportunity to assuage the feelings of a population reeling from the pains of losing loved ones and or businesses.

These major slips will, no doubt, cost the ruling party some political capital for which it may regret in the coming elections. Whether these things matter to President Buhari will depend on how he responds to governance issues in the days ahead, and whether he will stop treating Nigerians with disdain.

The Presidency on Thursday, October 22, blamed religious organizations and some sections of the media for promoting messages of hate in the country.

In a statement by the Special Adviser on Media and Publicity to the president, Femi Adesina titled, ‘If Nigeria dies, hatred killed her,’ the presidency identified the sources of hated as coming: “From hateful messages from the pulpit, as if that was the message of love Jesus Christ handed over to his followers. From unduly critical messages during Jumat services. From radio and television programs, in which bile is spewed. From talk shows which become a harangue of government, newspaper articles and columns tailored to instigate and generate dissent, and the like.”

It is obvious that Buhari’s image-makers are battling hard to change or shape the narrative in the many reputation management challenges confronting Mr President and his administration. The irony, however, is that try as much as they do, the facts of the moment poke in their faces, leaving the administration playing the Ostrich.

By engaging in blame games, Adesina gives away, perhaps unknowingly, the administration’s future plans to crack down on perceived enemies. This argument is supported by the popular saying that, to hang a dog, give it a bad name.

The country may, perhaps, brace for authoritarianism if Adesina is to be taken seriously.

The army’s denial came amid pictorial and video evidence showing men in army uniform shooting at the peaceful and unarmed EndSARS protesters.

In denying the shootings and killings, in the face of overwhelming evidence, the Nigerian Army shamelessly displays its integrity deficits, and also fails to appreciate that there is a limit to propaganda.

If there were any doubts regarding the real objective in executing the 2020 version of Operation Crocodile Smile, that has been obliterated as the Army has since retreated after causing mayhem at the Lekki toll gate.

If the military is to be believed, then its time to admit that the failure to successfully contain attempts at the country’s sovereignty is simply a reflection of its woeful appreciation of the place of strategy, technology and artificial intelligence in the prosecution modern warfare.

The internet will always remember the ‘war games’ at Lekki, so also will the social media space never forget the pictures, videos and conversations around the shootings.