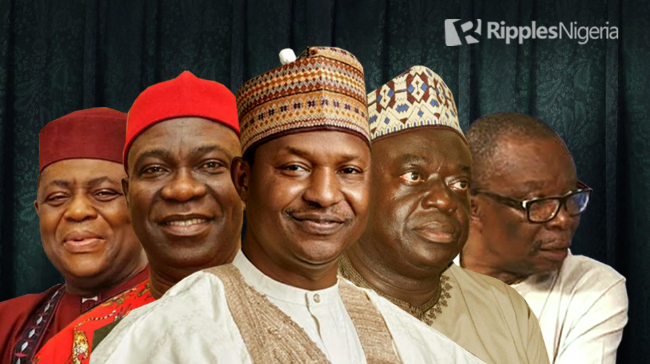 The former Deputy Senate President, Ike Ekweremadu and his wife were arrested in the United Kingdom for alleged organ harvesting last week.

The Ekweremadus were arrested by the British Metropolitan Police on June 22 for allegedly conspiring to arrange to bring a child to the country to harvest his organs.

The Metropolitan Police said Ekweremadu and wife were arraigned at Uxbridge Magistrates’ Court for conspiracy to facilitate the travel of another person with a view to “exploitation, namely organ harvesting.”

The statement read: “Beatrice Nwanneka Ekweremadu, 55 (10.9.66) of Nigeria is charged with conspiracy to arrange/facilitate travel of another person with a view to exploitation, namely organ harvesting.”

Ekweremadu’s travails justify the place of law in the conduct of men’s affairs. It, indeed, signifies that nobody is above the law, and that bad behaviour must not be rewarded if only to serve as a deterrent to evil-minded individuals.

The development has therefore reinforced the calls for the Nigerian government to strengthen public institutions to check unacceptable conduct, particularly, among public office holders and other highly-placed persons in the country.

The former Minister of Aviation, Femi Fani-Kayode, on June 22 raised the alarm on purported plans by 22 All Progressives Congress (APC) senators to dump the party in the coming weeks.

Fani-Kayode, who stated this on his verified Twitter handle, said the affected Senators were unhappy because they were denied the party’s ticket for the 2023 elections.

He wrote: “22 APC Senators are threatening to defect to PDP because they have been denied tickets to return to the Senate.
“This is serious and something must be done to prevent it. Many are concerned and we urge our able National Chairman & National Secretary to reach them. We cannot afford to lose them.”

Though unconfirmed, the plan has once again confirmed the widely-held perception that the game of politics is about self-service.

It illustrates the lack of principle among players and strengthens the call for the need to make elective positions less attractive in order to deter individuals from seeing such as a quick and easy platform for personal enrichment.

Babangida, who featured in Channels TV’s Political Today, said Nigerians might not be ready to elect Obi as the country’s president next year.

Read also:QuickRead: Ortom’s renewed attack on Buhari’s govt. Four other stories we tracked and why they matter

He said: “Peter Obi is my good friend and a former member of the Nigerian Governors’ Forum.
“He is a very excellent person. His candidature, in terms of the presidency, – I think he will make some name now. But he may be able to make it only in 2027, and 2031. But 2023? Too early.”

The ex-governor’s position aligns with the sentiment expressed by many on the chances of the Labour Party’s presidential candidate in next year’s election.

Although there is a new wave of enthusiasm, especially among the youth, to change the status quo in Nigeria with Obi as the centre of it all, the odds are still firmly stacked against him due to a number of factors including a lack of solid structure by LP and uncertainty over planned alliance with other parties.

With concerns on whether the LP and other forces will be able to congregate as one due to ideological differences, it is still safe to conclude that the 2023 elections will follow the pattern of previous polls in the country.

The Academic Staff Union of Universities (ASUU) on June 24 lambasted the Federal Government for allegedly misleading Nigerians on the ongoing strike by the union.

ASUU President, Emmanuel Osodeke, who featured in a Channels Television’s programme, Sunrise Daily, said: “We were never invited to any meeting as of yesterday (Thursday). Nothing was sent to us. Not even virtual notice. So we’re surprised how the Minister of Labour arrived at that conclusion. The problem with this system, especially the Minister of Labour, is the issue of trust.”

ASUU’s response to the Minister of Labour and Employment, Chris Ngige’s claim on the efforts to resolve the crisis shows that the union does not believe that the government means well in its dealing with the university teachers.

The prolonged strike by the union and the brickbats that characterised the negotiation between the federal government and ASUU have cast doubts on the integrity of the leaders to honour agreements freely signed with workers or trade unions.

The government’s lukewarm attitude not only spells doom for the country’s education system, it has also exposed the students who have been at home for about five months to all forms of social vices including immoral and criminal acts.

The development clearly shows how much weight the country’s leadership attaches to knowledge acquisition as an important driver of economic growth and development.

The Supreme Court on June 24 dismissed a suit filed by President Muhammadu Buhari and the Attorney-General of the Federation, Abubakar Malami, challenging the controversial section 84(12) of the Electoral Act.

A seven-member panel of the apex court led by Justice Musa Dattijo-Muhammad dismissed the suit and described it as an abuse of the court process.

Justice Aokmaye Agim, who delivered the lead judgement, held that Buhari, having earlier signed the electoral law, cannot turn around and approach the court to remove it.

He said: “The president has no power to request or compel the National Assembly to amend any part of the Act of the National Assembly in which he has participated in its making.
“This suit cannot be entertained by this court under section 1(1) (a) of the Additional Jurisdiction of the Supreme Court Act.”

The apex court with its ruling has provided absolute clarity on the matter of procedures. However, the ultimate interpretation of the contentious section for politicians who may feel injured by provisions of the amended law is not fully resolved.

With the president ruled out of the process, the matter remains active as any other individual can approach the courts to seek ultimate interpretation of the Section 84(12).

While the ruling will calm some strained nerves, especially among the ruling class, it will definitely go a long way in enriching the country’s jurisprudence and guaranteeing the rule of law as an indispensable element in nation-building.

QuickRead: Northern Elders’ position on Atiku, Tinubu. Four other stories we tracked and why they matter

QuickRead: Ortom’s renewed attack on Buhari’s govt. Four other stories we tracked and why they matter