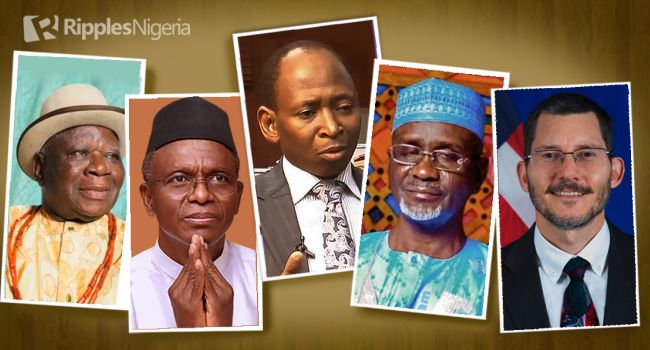 The Kaduna State Governor, Nasir El-Rufai, last week raised the alarm over an invasion of the state by Boko Haram insurgents. This and four other stories dominated national discourse last week.

El-Rufai said: “One of my childhood friends who was also a classmate in school was one of those kidnapped in the March 28 attack on the Abuja-Kaduna train.
“He overheard the kidnappers saying to themselves that forests in Kaduna are better than the Sambisa forest and will continue to flood here.”

The development illustrates the increasing helplessness of security agents and, by extension, the Federal Government in the fight against insecurity in Nigeria.

It either shows that the government clearly lacks the idea or the capacity to address the menace.

The administration’s action or inaction has emboldened the insurgents and other criminals in their heinous crimes, and it will not come as a surprise if they sack communities in the North-West and hoist their flags as they did in the North-East in the past.

The onus is, therefore, on the government to wake up to its responsibility of protecting Nigerians either by rejigging its approach or seeking foreign help against the criminals.

The Economic and Financial Crimes Commission (EFCC) on May 16 arrested the Accountant General of the Federation, Ahmed Idris, for alleged N80 billion fraud.

The EFCC’s Head of Media and Publicity, Wilson Uwujaren, who confirmed the development in a statement, said Idris was arrested after failing to honour the commission’s invitations to respond to issues connected to the fraudulent acts.

He said: “The Agency’s verified intelligence showed that the AGF raked off the funds through bogus consultancies and other illegal activities using proxies, family members and close associates.
“The funds were laundered through real estate investments in Kano and Abuja.”

The AGF’s arrest shows that corruption remains pervasive in Nigeria and shockingly under a government that openly identified the fight against graft as one of its cardinal programmes.

It is, indeed, a sad reminder of the true state of the Nigerian society where moral decadence has become the new normal and right values eroded because punishment is not adequately served to act as a deterrent to evil-minded individuals.

Read also: QuickRead: PDP ditching of zoning principle. Four other stories we tracked and why they matter

The development, therefore, reinforces the call for the strengthening of public institutions, and more importantly the agency saddled with the task of tackling grafts in the country.

The former Kano State governor, Ibrahim Shekarau, on May 17 dumped the All Progressives Congress (APC) for the New Nigeria People’s Party (NNPP).

The party confirmed the development in a terse statement on its Twitter handle.
It said: “Finally: Sen. Ibrahim Shekarau Joins Us.”

The ex-governor’s defection from the APC, the third in less than two weeks, continuous to deepen the argument that politics is an interest-driven game.

Though it shows a party in crisis, going into the 2023 general elections, the internal squabbles and realignment of interests
between Shekarau and Rabiu Kwankwaso of NNPP is seen as a potent force that could upset the power equation in Kano State.

It should not surprise, therefore, if the ruling APC loses its dominant hold on Kano State.

The Southern and Middle Belt Forum (SMBLF) leaders on May 20 insisted on a power shift to the Southern part of the country in 2023.

In a communique issued at the end of their meeting in Abuja, the leaders urged Nigerians to vote for southern presidential candidates and not their northern counterparts next year.

The communique read in part: “We, therefore, call on all delegates of all political parties, and true lovers of democracy, as a sacred obligation, to reject presidential aspirants, or candidates, from the North, and only vote for those from the South in the party primaries.

“The Forum firmly reiterates its stance on the Principle of Zoning and Power Rotation between the North and the South, as the basis on which the Nigerian Federation has, since Independence, been premised.”

The persistent clamour for a power shift to the South continues to widen the fault lines in a nation already ravaged by insecurity ahead of the 2023 elections.

It, therefore, brings to the fore the need for the country to enthrone a more transparent, equitable and fair path to electing people into leadership positions instead of relying on a compromise arrangement that had foisted a reign of injustice and bad leadership on the country.

The United States government on May 17 threatened to impose visa restrictions on promoters of violence during the 2023 general elections in Nigeria.

The US Assistant Secretary of State for Africa, Michael Gonzales, handed out the warning at an international conference with the theme: “United States Policy and Nigeria’s National Decisions in the 2023 Elections,” held at Johns Hopkins University.

He said: “The US government would continue to use messaging and other diplomatic channels at its disposal, including visa restrictions, where warranted to prevent election violence in Nigeria.”

External interests in the conduct of elections in Nigeria emphasize, among others, global concerns for the enthronement of credible and sustainable leadership recruitment processes built on fairness, equity and justice.

The US move is, therefore, aimed at dissuading all individuals who may be tempted to use violence to undermine Nigeria’s democratic process while ensuring that people’s votes count in the election of leaders.

QuickRead: Atiku’s emergence as PDP 2023 candidate. Four other stories we tracked and why they matter

QuickRead: PDP ditching of zoning principle. Four other stories we tracked and why they matter