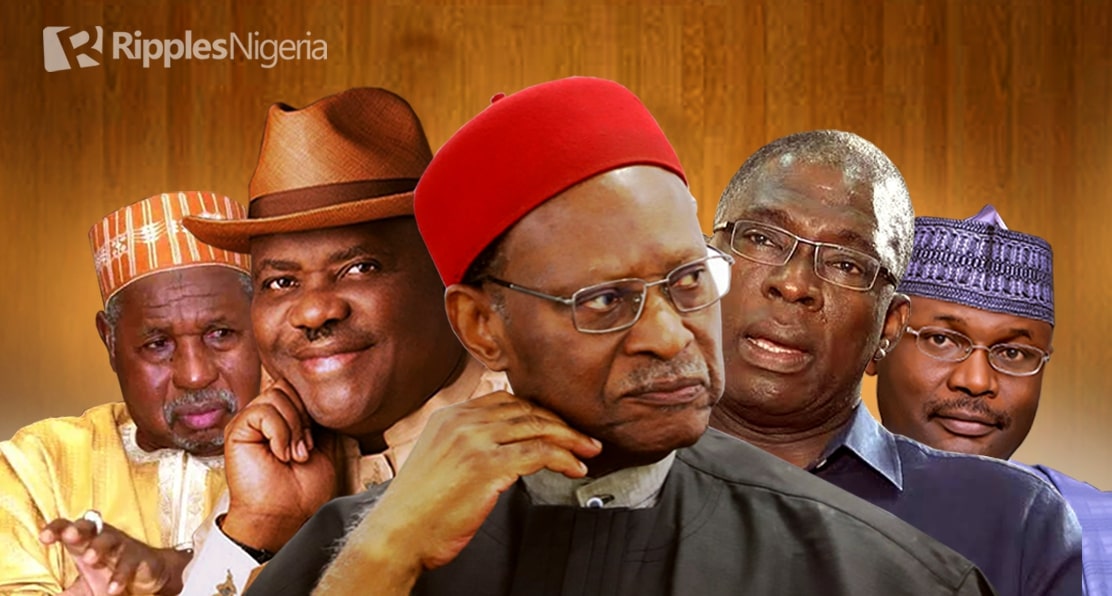 On October 18, Wike endorsed the Lagos State governor for another term in office.

The governor, who spoke at the National Women’s Conference organised by the Committee of Wives of Lagos State Officials (COWLSO) at the Eko Hotel and Suites in Victoria Island, said Sanwo-Olu has performed very well in the last three years and deserved another term in office.

The governor’s declaration reinforces the claim that politics is an interest-driven game, and may have given the earliest indication yet that Wike might work for the All Progressives Congress (APC) in the 2023 general elections.

With the Peoples Democratic Party (PDP) pressing the self-destruct button, the development may have also thrown a spanner in the plans of the major opposition party in the bid to capture the state it has coveted for 24 years.

The Economic and Financial Crimes Commission (EFCC) on October 20 arraigned the former Attorney-General and Commissioner for Justice in Lagos State, Olasupo Shashore, for alleged money laundering at the Federal High Court, Lagos.

The EFCC counsel, Bala Sanga, told the court that the defendant persuaded one Olufolakemi Adelore to accept a $100,000 cash payment directly from him without going through a financial institution.

He said: “The defendant also paid Ikechukwu Oguine $100,000 in cash directly, without going through a financial institution.
“The offenses were committed on or around November 18, 2014.”

The arraignment of a former law officer for corruption-related offences speaks to the culture of impunity in high places in the country.

With the law being no respecter of persons, the anti-graft agencies may need to spread the dragnet further to unravel a system-wide malaise that has eaten deep into the nation’s fabric.

This development is, indeed, a sad reminder of the true state of the larger Nigerian society where moral decadence has become the new normal and right values eroded, especially among those who are expected to lead by example.

The former Secretary General of the Commonwealth, Chief Emeka Anyaoku, on October 21 challenged Nigerians to elect leaders who would restructure, and unite the country in 2023.

He made the call at the 11th lecture series organised in his honour in Ibadan, Oyo State.

Anyaoku said: “We have heard a thrilling lecture from Prof. Ayo Olukotun who talked about the watershed elections of 2023. Indeed, I agree with you that the 2023 elections will be really a watershed because of their importance to attaining the Nigeria of our dreams.

“I would urge all our electors, citizens who will be voting in the 2023 elections to vote for only those leaders who would promise to prioritise the revamping of the Nigerian governance system because that would be key to our development, political stability, and achievement of true unity in the country.”

Next year’s elections provide the perfect chance for Nigerians to press the reset button for the country.

READ ALSO: QuickRead: ASUU’s suspension of strike. Four other stories we tracked and why they matter

It offers a once-in-a-lifetime opportunity for citizens to look back and figure out where and how the country missed the opportunity to put itself on the path of progress and right the wrongs of the past by electing competent and honest leaders.

The Independent National Electoral Commission (INEC) on October 18 warned political parties to steer clear of violent campaigns in the build-up to the 2023 general elections.

The commission’s warning followed reports of clashes among party supporters during campaigns in some states across the country.

The INEC Chairman, Prof. Mahmood Yakubu, who made the call at the “Training Of Master Trainers On Election Technology For The 2023 General Elections,” in Abuja, said: “Reports of clashes among parties and their supporters in some states of the country during the ongoing electioneering campaign is worrisome. So too is the reported denial of access to public facilities for parties and candidates in some states of the federation.”

The pockets of violence recorded across the country since the campaign for the 2023 elections kicked off last month has heightened fears about the conduct of the polls.

It also confirms fears that the peace accord initiated by the Abdulsalami Abubakar-led National Peace Committee may be a ruse after all.

The onus is therefore on the candidates and their parties to rein in the supporters to avoid provocations or any act that will escalate the already tense situation in the country ahead of the elections.

5. Defection of Katsina ex-SSG to PDD

The former Secretary to the Katsina State Government, Alhaji Mustapha Inuwa, on October 16 dumped the All Progressive Congress (APC) for the Peoples Democratic Party (PDP) in the state.

Inuwa, who lost in his bid to secure the APC governorship ticket in the state, told journalists he has been sidelined in all APC activities in the state.

He said: If you could remember, during the APC governorship primary election in the state, we know all that happened at that time, and at the end, a winner was declared.
We accepted defeat and we promised to support the party’s candidate, after which he visited me and I promised him all the necessary support.”

The ex-SSG’s switch to the opposition party after his defeat in the Katsina State governorship primary further deepens the assertion that politics as an interest-driven game.

Cross-carpeting is a common phenomenon, especially among politicians craving for relevance in an election season, and will continue till the eve of the 2023 elections that has been filled with subplots and intrigues.

CBN’s planned redesign of Naira. Four other stories we tracked and why they matter

QuickRead: ASUU’s suspension of strike. Four other stories we tracked and why they matter