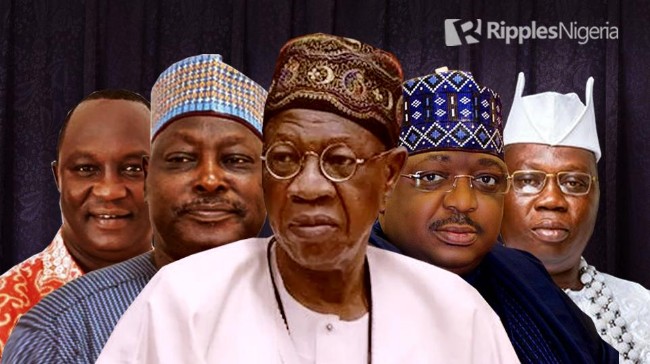 The Nigerian government said last week that the British Broadcasting Corporation (BBC), and the broadcasting arm of Media Trust Limited, Trust TV, would be sanctioned for allegedly fuelling terrorism with their reportage.

On July, 28, the Minister of Information and Culture, Lai Mohammed, while speaking in Abuja, gave hint that some media channels may come under government sanction.

He said: “There is a regulatory body regulating broadcasting which is the Nigeria Broadcasting Commission (NBC)…
“They are looking at which part of the Broadcasting Code has been violated by the BBC and Trust TV…
“When otherwise reputable platforms like BBC can give their platform to terrorists showing their faces as if they are Nollywood stars, it is unfortunate.
“I want to assure them that they will not get away with it, appropriate sanctions will be meted to both the BBC and the Trust TV.”

The move shows that the government has become increasingly jittery as dissatisfaction grows over its poor handling of the country’s security challenges.

It also means that President Muhammadu Buhari’s government will do all it could to suppress dissenting voices even if the strategy is unpopular as it was with Twitter last year.

As government gets jittery, instead of being decisive, it should be expected that the criminals will get more emboldened while the country slides further into a failed state.

The leaders of the Peoples Democratic Party (PDP) caucuses in the Senate and House of Representatives in separate briefings held on July 27 and July 28 blasted the president for failing to secure the country from criminals.

On his part, the Senate Minority Leader, Phillip Aduda, said: “We went into a closed-door session on the state of insecurity in Abuja and took cognisance that Nigeria is no longer safe…
“We have issued a six weeks ultimatum for President Buhari to resolve the problem of insecurity in the country or be impeached and we walked out of chambers in protest.”

Although the National Assembly’s move to impeach Buhari speaks of the president’s failure to protect lives and properties in the country in the last seven years, the threat appears a knee-jerk response, and may count for nothing as the former military ruler has just 10 months to complete his tenure.

Therefore, as good as the move might appear to be, there are concerns over what the president’s impeachment would achieve if the lawmakers succeed in their bid to get rid of him.

In all, it may be safe to conclude, given the realities on the ground, that members of Nigeria’s leading opposition party are basically riding the wave or playing to the gallery , knowing that their threat could, indeed, be hot air.

Read also:QuickRead: Prediction on 2023 presidential election. Four other stories we tracked and why they matter

The Founder of the Oodua Peoples Congress (OPC), Gani Adams, warned on July 25 that Nigeria might collapse in the next two years if governments at all levels fail to address the present security and economic challenges in the country.

He said, while speaking in Arigidi-Akoko, Ondo State, “Amidst the present insecurity situation, economic crisis and downgraded institution, governance in the country has shown lack of coordination and Nigeria’s paths towards a unitary system will only cause the country’s problems to get continually worse.”

The OPC founder’s remark highlights the current precarious position of the Nigerian state. The increasing attacks by terrorists in many parts of the country, including security and correctional facilities, not only have grave implications for national security but also reinforce the assertion that nowhere may be safe in Nigeria.

It is a sad reminder of how dangerously Nigeria is sliding into a failed state with the government appearing helpless or short of ideas on how to salvage the situation and pull the country back from the brink.

4. NLC’s ultimatum to govt on ASUU

The Nigeria Labour Congress (NLC) on July 26 gave the Federal Government a two-week ultimatum to resolve the dispute with the Academic Staff Union of Universities (ASUU) or face a total shutdown across the country.

The NLC Chairperson in Lagos, Agnes Sessy, issued the ultimatum at the State Government House in Alausa, Ikeja, during a rally organised by the congress to protest the ongoing strike by ASUU.

She said: “If the Federal Government does not resolve the strike within two weeks, there would be a nationwide mass protest. In fact, the #ENDSARS protest would be a child’s play.”

NLC’s last week’s rally highlights Nigerians’ discontent with the federal government and its handling of the union’s almost six-month-old strike.

The varsity lecturers’ reluctance to suspend the strike until the government honours the agreement by both parties speaks of their lack of trust in the government to respect pacts freely signed with trade unions in the country.

On the other hand, failure to execute President Buhari’s 14-day ultimatum to the minister of education to resolve the crisis may just have confirmed government’s total disregard for the well-being of the education sector, in particular, and Nigerian students in general.

The former Secretary to the Government of the Federation, Babachir Lawal, on July 29 renewed his criticism of the All Progressives Congress (APC) over the adoption of a Muslim-Muslim ticket for the 2023 general elections.

Lawal spoke at the APC Northern Christian Leaders Summit in Abuja and urged Nigerians to reject the APC presidential candidate, Bola Ahmed Tinubu, for picking a Muslim as his running mate in next year’s election.

He said: “We will protect ourselves. The PVC and our prayers will be our weapons of choice and we will massively deploy them in 2023.
“The main purpose of this historical narrative is to let you know that for the APC, a Muslim-Muslim ticket has been a long-term political strategy and not a one-off decision.”

Lawal’s and other Nigerians constant criticism of the APC over the party’s adoption of a Muslim-Muslim ticket is another clear reminder of how religion has driven a wedge among the citizens.

It also shows that religion, ethnicity, and other primordial sentiments remain major criteria in the leadership recruitment process in Nigeria 22 years after the return of democratic rule in the country.

QuickRead: Prediction on 2023 presidential election. Four other stories we tracked and why they matter