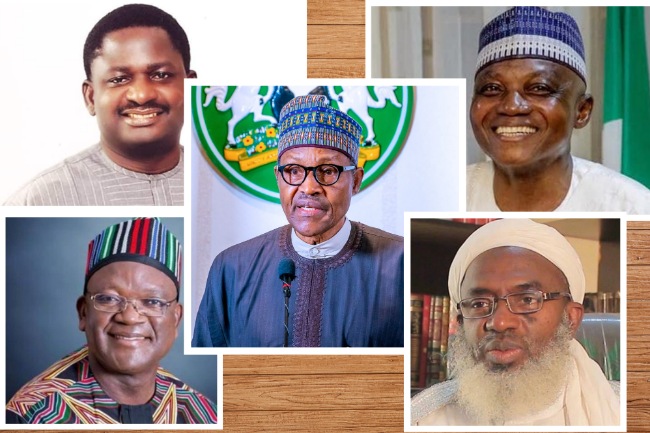 The week in review was rounded up with the faceoff between Islamic cleric, Sheikh Ahmad Gumi and presidential aide, Femi Adesina.

The two dominated the headlines with accusations and counter accusations on the treatment bandits should get as against the amnesty Gumi has been clamouring for them.

We also tracked four other stories which kept Nigerians talking during the week.

Enjoy this offering till we come your way next week.

1. Gumi’s war of words with Adesina

On September 10, controversial Islamic cleric, Ahmad Gumi, took on President Muhammadu Buhari’s media aide, Femi Adesina, for describing him as a bandit-lover because of his constant calls for the government to grant them amnesty.

While reacting to the allegations, Gumi wrote on his Facebook page:

“Some disingenuous people say: peace and negotiations with herdsmen, bandits have failed, and your mission has failed!

“I said my mission has not failed but it was sabotaged or discouraged by the same influential people that benefit from the chaos or like us to destroy ourselves and leave the herdsmen in perpetual ignorance.”

Why it matters
Beneath the furore generated by the feud between Gumi and Adesina, lies the question of what has become of millions of hapless Nigerians who are victims of the murderous rampage of the bandits whom Gumi wants Nigeria to treat as victims.

The seeming face-off, however, helps to clear some doubts as to government’s disposition towards the bandits and killer herdsmen who recently have reportedly come under intense onslaught by the Nigerian military.

On September 10, President Muhammadu Buhari made a rather belated appeal to members of the National Association of Resident Doctors (NARD) to suspend their 40-day-old strike.

“Embarking on industrial action at this time when Nigerians need you most is not the best action to take, no matter the grievances,” Buhari had said during a meeting with the NMA.

Why it matters
Buhari’s late appeal to the striking doctors only goes to show the weight the government attaches to the need for fundamental reforms in the country’s health sector.

The lingering strike does not portray the administration as sufficiently proactive given that the doctors gave an early warning to down tools and protest poor conditions of work and infrastructure in the healthcare system.

Allowing the strike to linger this long in the midst of a ravaging pandemic does little to give this regime some positive marks in the area of responsiveness.

Also on September 10, President Muhammadu Buhari gave Nigerians another of his routine excuses on why the economy has become stagnated.

In a statement by his Senior Special Assistant on Media and Publicity, Garba Shehu, Buhari blamed the country’s economic challenges on high population, COVID-19 pandemic, and separatist agitations.

“The source of revenue that Nigeria has depended on for so long experienced decline due to the global pandemic, our population is rising fast and the tension arising from both is fuelling agitation among our youths,” he said.

Why it matters
What the new excuses by Buhari portend for Nigeria is the underlying feeling that, perhaps, the administration’s various interventions are not impacting the populace as well as it should.

READ ALSO: QuickRead: Adesina’s sweeping insult on Nigerians. Four other stories we tracked and why they matter

By laying the blame for its poor performance on the above indices, the government may have resigned to fate as the inhibiting factors to success may not go away anytime soon.

4. Again, denials of a RUGA agenda

On September 10 as well, the federal government moved to dispel rumours that the recent approval for the establishment of farm estate across the country was an agenda to bring back the rested RUGA scheme.

A statement by the Executive Secretary of National Land Development Authority (NALDA), Paul Ikonne, had noted:

”The integrated farm estates the president mandated us to put it in all the 109 Senatorial districts have nothing to do with RUGA.”

Why it matters
The need to maximise Nigeria’s agricultural potentials across the country cannot be over emphasized. However, the attempt to delink the recent initiative from the RUGA plans clearly shows that the integrity gaps are not shrinking and that Nigerians have come to distrust the government and most of its actions.

The concerns over forceful take over of lands should challenge the Buhari government to communicate its programmes and policies more effectively and honestly to avoid unnecessary uprisings.

On September 11, Benue State Governor, Samuel Ortom, opined that zoning would determine the fate of the Peoples Democratic Party (PDP) in the 2023 general election.

“Zoning is very critical; do the right zoning, win elections; do the wrong zoning and you will lose elections.

“The ultimate is for us to win the 2023 elections because of the abysmal performance of the APC government in Nigeria,” Ortom said while addressing journalists at a press conference in Makurdi.

Why it matters
Ortom’s remarks throw further light into the internal skirmishes threatening to tear the main opposition party apart, with clearer signals that it may not be divorced from struggles over where the party’s presidential ticket should go.

The deductions are that a party chairman from the South would suggest without equivocation that the presidential ticket will go north, and vice versa.

The signs are that the internal rumblings may grow louder if not well managed.

QuickRead: Unease over IPOB/Yoruba Nation ‘alliance’. Four other stories we tracked and why they matter

QuickRead: Lai’s claims of ‘deep fake news’. Four other stories we tracked and why they matter