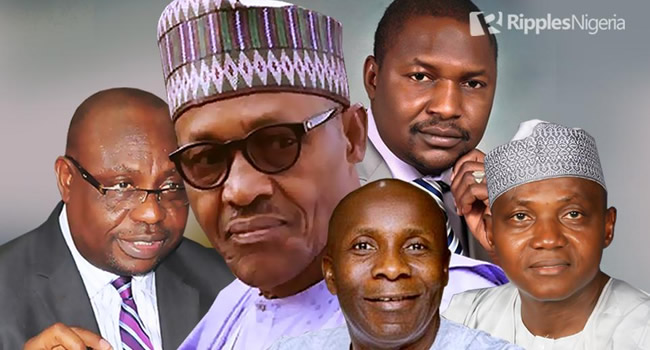 The ongoing discourse on the possibility of transmitting election results electronically in Nigeria has become a sore thumb between the Independent National Electoral Commission (INEC), and the National Assembly, resulting in divergent positions from both sides.

While the legislators want Nigerians to believe it would be an impossible task to venture into, INEC promptly floored their argument by insisting it is something that can be done without much ado.

Also during the week in review, the ruling All Progressives Congress (APC), promised to produce a consensus presidential candidate for the 2023 elections, raising several questions on the vexatious issues of zoning which has been on the front burner for years now.

We also tracked three other stories that got Nigerians talking during the week.

On July 17, the Independent National Electoral Commission (INEC), contradicted the position of the National Assembly on the electronic transmission of election results, saying it has the capacity to make it work throughout the country.

INEC’s Commissioner for Information and Voter Education, Festus Okoye, while speaking on a television programme, reiterated the stance of the Chairman of the Commission, Prof. Mahmoud Yakub, and cleared the air on the contentious issue, dispelling insinuations that it lacks the ability to transmit election results electronically in 2023.

READ ALSO: ICYMI…QuickRead: Onochie’s punctured lies. Four other stories we tracked and why they matter

“We have uploaded results from very remote areas, even from areas where you have to use human carriers to access. So, we have made our own position very clear, that we have the capacity and we have the will to deepen the use of technology in the electoral process.”

The sharp divisions between the lawmakers and INEC on the ability of the commission to transmit election results electronically sends a disturbing signal that there could be more to the intrigues that played out regarding the Electoral Act Amendment Bill.

If anything, it would suggest, even to the uninitiated, that there is a bold attempt to make the electoral processes vulnerable to manipulations ahead of the forthcoming general polls in 2023.

Without a transparent electoral process, the development, indeed, sends an early warning that poll integrity could become a scarce commodity in future elections.

On July 21, the ruling All Progressives Congress (APC), made what many believed was a shadow attempt at unity, by revealing that it would produce a consensus presidential candidate for the 2023 elections.

The National Secretary of APC Caretaker and Extraordinary Convention Planning Committee, Senator John Akpanudoehede, disclosed this in a statement on in Abuja, which read:

“After our congresses and the National Convention, we will shock PDP by bringing a consensus and an agreeable candidate that will fly the party’s flag come 2023. APC has no 3rd term agenda like PDP.”

READ ALSO: QuickRead: Pretentious warriors for democracy. Four other stories we tracked and why they matter

The pronouncement on consensus candidate is indicative of intense power struggles within the ruling party which the leadership is working hard to contain by avoiding a competitive presidential primaries.

The quiet struggles have seen the Buni-led Caretaker committee pitched against a Bola Ahmed Tinubu camp intent on pushing the candidacy of the one generally referred to as the National Leader.

The internal political manoeuverings, if not properly managed, could lay the seeds for future implosions that will ruin the party.

On July 22, the Minister of Justice and Attorney-General, Abubakar Malami (SAN), made a volte-face when he told a Federal High Court in Lagos, that the Federal Government did not stop Nigerians from using the micro-blogging platform, Twitter.

Responding to a suit filed by a Nigerian lawyer, Inibehe Effiong, over the suspension of the social media platform by the Federal Government, Malami, in a counter affidavit on behalf of the government, Malami said:

“The applicant (Effiong) and the class he seeks to represent can still operate those Twitter accounts from anywhere in the world and even from Nigeria.

“Nigerians are still tweeting, even at this moment as the ban on Twitter is not aimed at intimidating Nigerians or an infringement on the rights of Nigerians to express their opinion.”

The duplicity of the Federal Government regarding its handling of the Twitter ban only reinforces the overwhelming general notion that the muzzling of critics’ voices is being elevated to a culture of governance.

By being clever by half, Malami conveniently forgot that he had vowed to prosecute any Nigerian who used Twitter, thereby worsening the integrity gap which has alienated the citizenry from a government that has repeatedly proven to be untrustworthy.

On July 22, the Presidency claimed that against all odds, the Muhammadu Buhari administration had “achieved a lot with the meagre resources and time available to it.”

The statement which was issued by Senior Special Assistant on Media and Publicity to the President, Garba Shehu, read:

“According to President Buhari, the security situation had improved compared to the instability in the North East before 2015, and the South South, where some parts of the north were directly under the control of terrorists, while the south was facing serious challenges.”

The bragging right, though welcome, further exposes the underbelly of the administration.

Nigerians must be forgiven for scoffing at the achievements reeled out by the Presidency, especially in the area of insecurity where even the blind can literarily see though the lies, given the decent into anarchy in most parts of northern Nigeria.

It would seem, therefore, that the Presidency, by its bogus claims, is either refusing to be truthful to itself or simply playing the ostrich which is tantamount to insulting the collective intelligence of Nigerians.

On July 20, President Buhari called on Nigerians to go after things that promote national unity rather than venting their energies on divisive actions.

While addressing members of the National Youth Service Corps (NYSC), in Katsina State, Buhari said that despite cultural, religious and ethnic differences, Nigerians were better off as a united people under one nation.

“I feel very strongly about the NYSC and I am wishing you all the very best. I assure you that you will be much better as Nigerians after your experience. I assure you that there is a better, united Nigeria, rather than we allowing ourselves to fall apart.”

Why it matters
Buhari’s preachments on Nigeria’s unity is understandable. The deepening fault lines have become too glaring, especially with most people clinging to primordial sentiments of religion, ethnicity and the like.

With these ills snowballing into secessionist agitations across the nation, the message of unity by Buhari to the Corp members could be a soothing balm on frayed nerves.

But it must be said that there is little Buhari’s preachments can do if perceived issues of injustice and inequity are continually swept under the carpet.

Nigeria’s unity would be mere wishful thinking unless the President and his team take proactive measures towards addressing the issues that have threatened to tear the very foundation of the country.

QuickRead: Saraki’s unending travails. Four other stories we tracked and why they matter

QuickRead: Pretentious warriors for democracy. Four other stories we tracked and why they matter