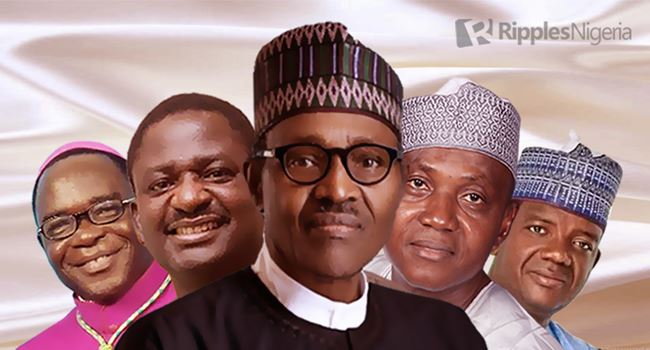 In this week’s QuickRead, there is no missing the daring political shots fired from familiar quarters last week. These include the frontal attack by the Bishop of Sokoto Catholic Diocese, Mathew Kukah, on President Muhammadu Buhari’s administration and the audacious submissions by Femi Adesina, Buhari’s spokesman, on why the performances of his principal cannot be compared with that of former President Goodluck Jonathan.

Three other interesting political events also made our pick. Like always, we examine their implications for national development.

The Bishop of Sokoto Catholic Diocese, Mathew Kukah, on Friday, December 25 expressed concerns over the level of nepotism in President Muhammadu Buhari’s administration, claiming that if a non-Muslim was in charge of the current administration there could have been a coup in Nigeria.

In a statement he titled “A nation in search of vindication,” Kukah said, among others:

“This government owes the nation an explanation as to where it is headed as we seem to journey into darkness…Every honest Nigerian knows that there is no way any non-Northern Muslim President could have done a fraction of what President Buhari has done by his nepotism and gotten away with it. There would have been a military coup a long time ago or we would have been at war.”

Kukah’s direct hit at Buhari speaks to the frustration of most Nigerians over his manifest breaches of the constitution which abhors nepotism, and guarantees equity and fairness through the institutionalization of the federal character system.

The pains expressed by the cleric also point out how dangerously the country’s fault lines continue to widen over deliberate pursuit of primordial sentiments of ethnicity and religion.

Perhaps, no where is this more bracingly displayed than in the military and para-military establishments, a fact that has continued to generate rising tension while the leadership buries its head in the sand, and like the ostrich, pretends that all is well.

Kukah’s concerns, therefore, draw attention to the urgent need for an honest conversation on the future of the country.

The Special Adviser on Media and Publicity to President Muhammadu Buhari, Femi Adesina, on Friday, December 25 described the present administration as smarter than the government of former President Goodluck Jonathan in the way it handled the abduction and release of 344 students of the Government Science Secondary School in Kankara local government area of Katsina State.

In a piece titled, ‘Enemies Of The Country Will Lose Las Las,’ Adesina Wrote, “Buhari acted smartly during the Kankara and Dapchi abductions while former President Jonathan was tardy in its response to the Chibok abduction.”

None can begrudge Buhari’s image-makers the right to hold an opinion or rise in the defense of their paymaster. After all, it is a job they signed on to do and get paid for.

Indeed, their day to day task is to deploy all necessary tools and strategy to shore up whatever battered reputation they perceive of the Buhari administration.

In the discharge of these responsibilities, however, they unwittingly invite critics to take shots at the government which often exposes Buhari’s inadequacies.

In the Kankara schoolboys matter, the Buhari government conveniently forgot that they were voted in to do a smarter job, and that a repeat of the Chibok experience clearly shows that the incumbent President learnt nothing from what happened in the past, which is now considered a huge shame.

President Muhammadu Buhari’s Senior Special Assistant on Media and Publicity, Mallam Garba Shehu, on Sunday, December 20 romanticized the love and trust that citizens supposedly have for Buhari, and their belief that he would take the country out of its present many challenges.

In an article he titled, ‘Five takeaways from the safe return of 344 Kankara schoolboys’, Shehu said, among others:

“Those who doubt this government’s resolve are mischievous…One must never take for granted the Nigerian spirit of brotherhood or their love for their President. The outpouring of solidarity and support for the administration cuts across all divides, from far and wide, from expected and unexpected quarters.”

Like his other colleague, Adesina, which QuickRead had referenced earlier, Garba epitomizes the quintessential salesman trained to sell ice to Eskimos. And, they, he and Adesina, are probably rendering the best of services in the eyes of the man who is dictating the tune!

However, try as much as they do, the facts of the moment poke in their faces, and these draw largely from failed promises which have tended to build a widening trust deficit between the citizens and the ruling All Progressives Congress (APC).

Among these failed promises which belie the government narrative are the huge failures in managing internal security and the failing economy.

A monarch in Zamfara State, Alhaji Attahiru Ahmad, on Sunday, December 20, asked the State Governor, Bello Matawalle, to allow the use of weapons by residents of the state to defend themselves against bandits and terrorists.

Ahmad, who is the Emir of Anka and Chairman of the Zamfara State Council of Chiefs, speaking when he paid a condolence visit to the Emir of Kaura-Namoda, Alhaji Sanusi Mohammad, who lost eight persons in his convoy following an attacked by bandits along the Zaria-Gusau road on December 17 said:

“Since the bandits have refused to surrender, the government should allow everyone to carry weapons for self-defence. One cannot make peace with people who are not ready to embrace peace and reconciliation as initiated by the Zamfara government.”

The Zamfara monarch’s request heightens the desperation of citizens for self-help in the face of glaring failure by the Nigerian state to deliver on its primary function of protecting lives and properties of the people.

The monarch, with his request, joins the list of prominent Nigerians, like Governor Samuel Ortom and General Theophilus Danjuma(Rtd), who believe that allowing Nigerians to carry arms for self-defence is a solution to the worsening insecurity in the country.

As persuasive as the arguments are, and with a distrust for government’s capacity to shield citizens from bandits and terrorists, the country may just prepare for a surge in arms build up which could portend more danger than solution.

The irresponsible conduct of politicians who arm poor and frustrated Nigerians for political and other nefarious reasons speaks to this concern.

President Buhari in a Christmas message he sent to Nigerians through his Special Adviser on Media and Publicity, Femi Adesina, on Thursday, December 24 said that the current security challenges in the country were beyond the simplistic options bandied around by some people.

“I plead with fellow compatriots to give our military and other security agencies more time, cooperation, and support by volunteering credible intelligence/information on activities of armed bandits, insurgents, and other criminal elements within their communities in order to put an end to this blight on our security landscape.

“To be sure, the problems are beyond the simplistic options being bandied around. We shall remain focused on following the complex, multi-dimensional route to reducing the incidents of insecurity to the barest minimum.”

President Buhari’s dismissal of alternate views as being simplistic smacks of arrogance and, probably, explains why, in the face of apparent failure, as well as popular demand, he continues to retain the services of his military chiefs who many believe have nothing more to offer the country.

As the Commander-in-Chief of the Armed Forces, the import of his disposition, in the eyes of the suffering masses, is that the supposed ‘complex, multi-dimensional route’ being employed by his government to contain insecurity in the country has failed woefully.

It may not be wrong to argue also that Buhari’s taciturn approach could be the reason he has refused to subject the military hierarchy to a serious probe, especially of the humongous sums of money deployed to the war efforts in the last five years.

COVID-19: Couples must get approval for weddings with over 300 guests –Lagos govt