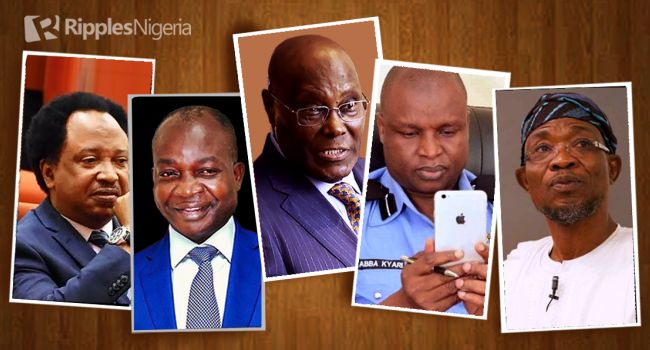 The suspended head of the police Intelligence Response Team (IRT), Abba Kyari, was arrested last week for an alleged drug scandal. This and four other stories dominated the news space in the period under review.

Police operatives on February 14 arrested Abba Kyari and four other persons. The embattled senior police officer was picked up a few hours after the National Drug Law Enforcement Agency (NDLEA) declared him wanted for an alleged link with a drug cartel.

The NDLEA spokesman, Femi Babafemi, who confirmed the development at a press conference in Abuja, said the agency strongly believed Kyari was a member of a drug cartel operating the Brazil-Ethiopia-Nigeria illicit drug pipeline.

He had said, among others: “Let me give a synopsis of what transpired. The saga started on Friday, January 21, 2022, when DCP Kyari initiated a call to one of the NDLEA officers in Abuja at 2:12 p.m.”

The current travails of the feared police officer show that corruption remains pervasive in virtually every institution in Nigeria. It particularly points to the rot in Nigeria’s police system known for all kinds of impunity.

A more comprehensive probe may well unravel a system-wide malaise that has eaten up both the rank and file of the organization.

It is, indeed, a sad reminder of the true state of the larger Nigerian society where moral decadence has become the new normal and right values eroded.

The development, therefore, reinforces the call for the strengthening of public institutions, and more importantly, a comprehensive reform of the country’s police system.

The Minister of Interior, Rauf Aregbesola, all but confirmed that all is not well between him and the National Leader of the All Progressives Congress (APC) Bola Tinubu.

Although he did not mention the ex-Lagos State governor’s name in his address to party supporters at the Ijebu Ijesha area of Osun State, the minister said: “This leader didn’t think good of us.
“We followed and served this leader with all our might. In fact, our loyalty to him had caused some people to start wondering if we were no longer Muslims.

The minister’s remarks show that politics is an interest-driven game, casting light on how a supposed close friendship can quickly be jettisoned in the pursuit of political goals.

Read also: QuickRead: Rise of Third Force mega party. Four other stories we tracked and why they matter

The perceived strained relationship could cause a huge setback to Tinubu’s 2023 presidential aspiration with forces against the APC national leader waiting to capitalize on the current bad blood between the duo to wreck the ambition.

The Academic Staff Union of Universities (ASUU) began a 30-day warning strike on February 14. The ASUU President, Prof. Emmanuel Osodeke announced this at a press conference held in University of Lagos.

He said: “The strike will be comprehensive and total and would last for the period of four weeks to enable the Federal Government to make changes.
“The union would embark on an indefinite strike if their demands are not met within one month.”

The fresh strike by ASUU casts further doubts on the integrity of the Nigerian state, and that its functionaries cannot be trusted to honour agreements freely signed with trade unions.

More importantly, it calls attention to government’s very lukewarm attitude towards positioning the country for the knowledge era, as the educational system risks more disruptions and quality of graduates diminish even further.

A former federal lawmaker, Shehu Sani, on February 13 blamed President Muhammadu Buhari for the worsening insecurity in the country.

Sani, who was reacting to the killing of 20 bandits said: “It’s commendable…But it also demonstrated how daring the criminals are becoming…Their boldness comes because the President and Commander in Chief refused to designate them as terrorists and give them the terrorists’ treatment…He was and is weak…”

The lawmaker’s remark illustrates the fact that security remains a major problem in Nigeria because of the President’s reluctance to move decisively against insurgents and bandits in the country.

The lack of political will, if sustained, should signpost a further deterioration in the country’s security situation and, perhaps, deepen the rapid descent into anarchy in most parts of the northern region.

The PANDEF spokesman, Ken Robinson, who reacted to the development in a statement in Port Harcourt, said: “He (Atiku) knows his statement is inconsistent with established and justifiable protocols and conventions, which have helped to sustain considerable understanding, peace, and stability in the polity.
“Truth is, the narrative that there is no zoning in the nation’s Constitution is a conscienceless mockery of our democratic evolution, and indeed, the country’s constitution.”

PANDEF’s disposition shows that Nigeria has not moved beyond primordial considerations in its leadership recruitment process.

It also means that ethnicity and religion, not merit, will continue to remain the ultimate factors in choosing the men and women that will lead the country in years to come.

QuickRead: Buhari endorses Electoral Act 2022 with reservations. Four other stories we tracked and why they matter

QuickRead: Rise of Third Force mega party. Four other stories we tracked and why they matter