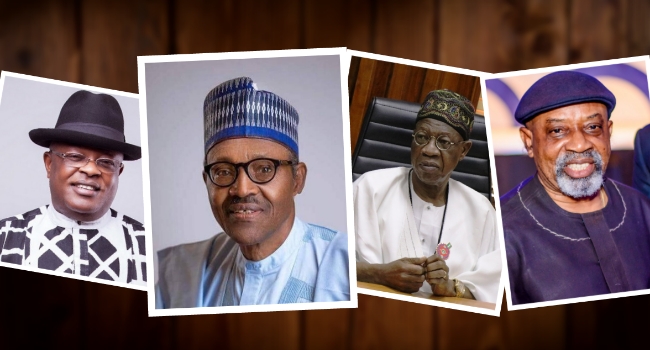 The endless wars levied against the Nigerian media by the Muhammadu Buhari-led government seem to have taken another turn as Minister of Information and Culture, Lai Mohammed, last week took the campaign against ‘fake news’ beyond the shores of the country.

Mohammed dragged the crusade to Cape Verde at a United Nations Conference.

We also tracked four stories that had a lot of significance on the political life of Nigeria and set the tone for talking points in the country.

“The danger of deep fake news is that it is difficult to differentiate fake news from real news…Anytime the fake news purveyors strike, they strengthen our resolve further to act on sanitising the social media,” he said.

Beyond its known desire to regulate the social media space and tackle fake news in the country, the endless media war continues to speak to government’s impatience with those it perceives as enemies of the state.

It is glaring that the media has become much more endangered for speaking truth to power and holding it accountable.

As the government struggles with delivering the so-called dividends of democracy, it should be expected that it would do more to not only intimidate the media but also blackmail all restive groups and individuals.

“As we are all aware, change is the only factor that is constant in every human endeavour and as this administration approaches its critical phase in the second term, I have found it essential to reinvigorate this cabinet in a manner that will deepen its capacity to consolidate legacy achievements.”

Buhari’s actions are, indeed, a testament to the fact that the only thing permanent in life is change. The President’s move also brings to fore the need for a proper fine tuning of the processes of governance where performance audits ought to be a regular exercise rather than exceptions.

The purported non-performance of the Ministers is a reminder to the President that he should review his penchant for putting great faith in his appointees.

On September 3, the Federal Government, once again, made another pledge to ensure an end to the current nationwide strike action by the National Association of Resident Doctors (NARD) which has paralysed activities in government-owned hospitals.

“We have returned to the table. The government pledged that the 2021 Residency Training Fund will be captured in the supplementary budget. This has been done and payment is ready,” Minister of Labour and Employment, Chris Ngige, reportedly said while addressing the Nigerian Health Commissioners’ Forum Quarterly meeting in Abuja.

The most recent pledge by the Federal Government, against the backdrop of subtle threats, suggests that this could be another unfulfilled promise given government’s notoriety for abandoning agreements reached with striking workers in the past.

READ ALSO: QuickRead: PIB becomes PIA, Atiku’s hat in the ring again. Three other stories we tracked and why they matter

The prolonged crisis also shows government’s unreadiness to prioritize health as a key developmental goal, forcing many citizens to live dangerously with diseases and ill health.

On September 3, Ebonyi State Governor, Dave Umahi, renewed the calls for a president from the Igbo ethnic group come 2023, insisting that denying the South-East the chance to produce Buhari’s successor will be unfair.

“The heartbeat of the people of the South-East is that they should be given a chance whether in PDP or APC for the presidency of this country for reason of equity, fairness and justice. If I follow APC for this length of time and they don’t give South-East an opportunity, I will feel bad. I will be disappointed.”

The concerns raised by Umahi could be suggestive of the fact that subterranean plots within APC do not provide strong hopes that the ruling party could settle for a president of Igbo extraction in 2023.

His current worries may have also given away his inner motives for jettisoning the main opposition party, the Peoples Democratic Party(PDP). Personal ambition, not larger Igbo interest could have been at the root of his aspiration.

A stronger signal though is that for the South-East region to wrestle the presidency from others in 2023, it must be ready for serious horse-trading that would engender a win-win scenario.

On September 4, the Joint Health Sector Unions (JOHESU) and Assembly of Healthcare Professional Association issued the Federal Government a 15-day ultimatum over the commencement of an indefinite strike due to outstanding welfare issues with the union.

“This also is to inform you that with effect from midnight of September 17, all our members in the Federal Health Institutions shall embark on indefinite strike action in all state and Local Government health institutions.”

The strike ultimatum issued by the Joint Health Sector Unions (JOHESU), is yet another bad example in the handling of agreements by the Buhari-led administration.

Indeed, it speaks to the integrity gap between the leadership and the led, a sign that the government cannot be trusted.

The impending work-to-rule action, if executed, would mean more trouble for the already comatose health sector which has brought greater misery than succour to the average Nigerian.

QuickRead: Gumi’s faceoff with Adesina. Four other stories we tracked and why they matter.

QuickRead: Adesina’s sweeping insult on Nigerians. Four other stories we tracked and why they matter