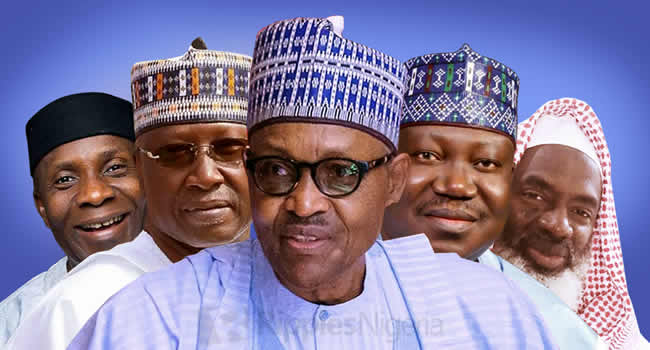 The state of the economy has always been a cause for concern for Nigerians and this was further exacerbated by the statement attributed to Senate President Ahmad Lawan regarding the Federal Government’s insistence on borrowing.

We tracked this and four other stories that got Nigerians talking during the week.

On June 25, Senate President, Ahmad Lawan, stated that Nigeria will keep borrowing to fund critical infrastructures because the country is broke.

Lawan, while interacting with State House correspondents after meeting with President Muhammadu Buhari at the Presidential Villa, Abuja, noted that Nigeria is currently poor and had no option but to borrow to finance critical sectors of the economy.

“Our options are really very limited as a country. First, we don’t have the necessary revenues, Nigeria is poor; we shouldn’t deceive ourselves.

Why it matters
The parlous state of the economy has been an ongoing cause of concern for the citizenry which was why nobody was surprised at the grim revelations by Lawan.

Nonetheless, it is duplicitous on the part of the Federal Government to keep soliciting for loans when the cost of maintaining the lifestyles of the politicians keeps increasing with every budget.

Without a clear agenda on how to create wealth and align the cost of governance with dwindling revenue, governments at both the national and sub-national levels must accept responsibility for the attendant chaos and rising poverty among the populace.

On June 23, Islamic cleric, Sheik Abubakar Gumi, alleged that banditry had become big business and that some Nigerian security operatives were aiding banditry in the country.

In an interview session on Arise TV, Gumi claimed that bandits had been able to sustain their crimes because there were some “bad elements” in the security system aiding them.

“How can these big weapons get across our borders into the forests without the cooperation of some bad elements in the security system? It’s not possible,” the renowned Islamic scholar noted.

Why it matters
Even before Gumi’s allegations, there had been insinuations in the past that insurgents terrorising different parts of the north had been able to sustain their efforts due to collusion with some criminal elements within the nation’s security apparatchik.

Gumi’s statement, therefore, comes as no surprise, especially when juxtaposed with his staunch defence of bandits and herdsmen.

With government appearing to tacitly ignore Gumi, it calls to question its readiness and willingness to leverage every intelligence at its disposal in taming the scourge of banditry and terrorism.

More importantly, the famed ease with which Gumi strolls into the camps of bandits exposes the Nigerian military as either ill-equipped to confront the criminals or helping to propagate growing claims that there is an orchestrated ethnic agenda by a section of the country to dominate others.

On June 21, President Muhammadu Buhari gave another of his regular threats when he said criminals who have taken up arms against Nigerian and Nigerians would be dealt with seriously.

While declaring open the First Progressives Youth Conference organized by the All Progressives Congress (APC) in Abuja, Buhari said:
“As you are all aware, we are currently dealing with some internal security challenges and I will like to reassure you that as the Commander-in-Chief of the Armed Forces, no effort will be spared in tackling them.

“As I have repeatedly said in recent weeks, every criminal element that has taken up arms against the peace of the country and its citizens will be brought to book accordingly.”

Why it matters
The President’s many remarks on how his government is checkmating wanton killings in the country has become too routine that It would be a pleasant shock to learn that they have had soothing effects on the polity.

This is so because repeated attacks, especially the abduction of hundreds of students, with government seeming helpless, do not give a sense of succour.

It should be clear at this time that the various promises to contain terrorism and banditry are sounding like broken records.

4. Lifting 100m Nigerians out of poverty

On June 22, President Buhari again inaugurated the National Steering Committee of the National Poverty Reduction with Growth Strategy (NPRGS), with the intention of lifting 100m Nigerians out of poverty.

The committee, according the the President, was set up to drive his administration’s plan of eliminating poverty in the country in 10 years.

He said, “This journey began in January 2021 when I directed the Chairman of the Presidential Economic Advisory Council and Secretary to the Government of the Federation to collaboratively work together to articulate what will lift 100 million Nigerians out of poverty in 10 years.”

Why it matters
While this initiative is a noble goal, it is hard to reconcile its intendment with the economic policies of the Federal Government which seem to drive more Nigerians into poverty, especially with the massive devaluation of the Naira, rising food prices and criminality that has chased farmers away from the lands.

Instituting a programme towards lifting 100 million Nigerians out of poverty may not have the desired effects if the prevailing socio-economic and political environments persist.

Ensuring self-sustainability within a secured environment that can attract investors looks to be the surest route to lifting Nigerians out of poverty.

On June 23, the All Progressives Congress (APC) said President Buhari is leading an education revolution that would transform the country technologically.

The National Secretary of the APC Caretaker and Extra-ordinary Convention Planning Committee (CECPC), John Akpanudoedehe, said the Buhari administration had been consistent in boosting education for human capital development in Nigeria.

“Commendably, President Buhari is fulfilling the APC’s electoral promise to lead an education revolution and transform the country technologically,” he said.

Why it matters
The claims to education revolution is fraught with too many loopholes. While the government may be entitled to its views, the realities on the ground suggest that Nigeria still habours one of the highest numbers of out-of-school children in the world.

This is made worse by the inability of government to stave off frequent abduction of students, fulfilling an old threat by terrorists to make learning inaccessible to boys and girls in the country’s northern region.

Government claims become even more laughable in the face of its failure to meet basic global standards in education budget while practically forcing teachers and students of tertiary institutions to stay home for over year, instead of meeting its unforced promises to academic unions.

QuickRead: Kanu’s ‘capture’, Igboho’s escape. Three other stories we tracked and why they matter

QuickRead: Soyinka drags Buhari to the slaughter. Four other stories we tracked and why they matter