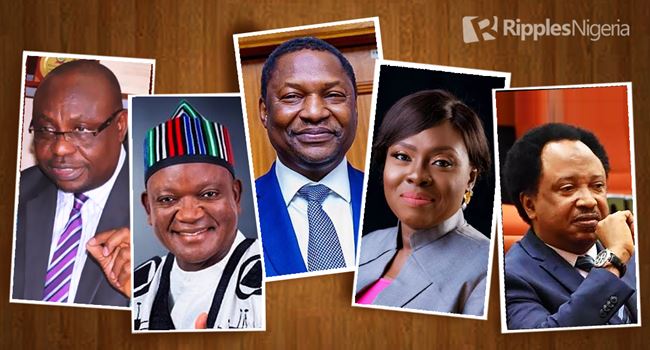 The Attorney-General of the Federation and Minister of Justice (AGF), Abubakar Malami, alleged last week that a serving member of the National Assembly was financing the activities of secessionist groups in the country.

The AGF’s statement which came just three weeks after President Muhammadu Buhari made a similar remark has suddenly become a subject of public discourse across the country.

The AGF on October 22 alluded to President Buhari’s claim that a serving federal lawmaker was a major financier of the arrowhead of Yoruba self-determination group, Sunday Adeyemo, aka Sunday Igboho.

Malami had said: “The Federal Government has received the report on financers of Adeniyi Sunday Adeyemo aka Sunday Igboho. The report revealed that Sunday Igboho is a Director and signatory to Adesun International Concept Limited registered on 23rd April 2010 and is linked to 43 bank accounts in nine banks.
“The major financier of the fugitive and separatists was found to be a Federal lawmaker in the National Assembly.”

The AGF’s remarks further illustrate Nigerian government’s over reliance on media trial, and reluctance to apply rule of law in hunting down perceived dissidents in the country.

The government’s intolerance of genuine criticism and disregard for the judicial process continue to perpetuate acts of injustice and explain the rising tension in the land, with its dire consequences for the country’s democratic journey.

In all, the frenzy to muscle democratic institutions shows how increasingly jittery the government has become.

Youths across Nigeria on October 20 marked the first anniversary of the #ENDSARS protest that took place in October last year with a rally in honour of those that lost their lives in the struggle to end police brutality in the country.

Read also: QuickRead: PANDEF’s position on power shift. Four other stories we tracked and why they matter

In a statement to mark the occasion, the rights watchdog, Amnesty International, noted through its Country Director, Osai Ojigho, that: “One year after peaceful #ENDSARS protests ended in a brutal crackdown by Nigerian security forces in Abuja, Lagos, and other parts of the country, no one has been brought to justice for the torture, violence, and killings of peaceful protesters, while reports of human rights violations by the police continue.”

The #ENDSARS promoters’ determination to proceed with the rally despite the threat of clampdown by the Nigerian government is a signal that the youths are convinced that no significant changes have taken place since the protest against the hated police unit, the Special Anti-Robbery Squad (SARS), spilled over into wider anger and calls for better governance in Nigeria.

With insecurity, corruption, economic woes, and general misrule still pervasive in the country, it should be expected that Nigerian youths will continue to seize the civic space and demand accountability from a failing leadership.

The Benue State Governor, Samuel Ortom, on October 19 urged the Federal Government to declare the herdsmen pillaging communities in Benue and other parts of the country as terrorists.

The governor’s position highlights his frustrations with the seeming lack of capacity of the federal government to contain the murderous activities of criminal herdsmen and general insecurity in the country.

It also raises serious concerns on the efficacy of the anti-open grazing law enacted by governors in the Southern part of Nigeria, as the federal government has willfully refused to back the legislations by denying the use of its policemen for enforcement.

By his lamentations, Ortom further attests to the view held in several quarters that the governors are mere chief security officers in name, and not in practice.

The Independent National Electoral Commission (INEC) said on October 21 all the governorship candidates in the Anambra election would sign a peace accord on November 4.

The INEC National Commissioner and Chairman, Information and Voter Education Committee, Festus Okoye, who disclosed this in Abuja, said: “The training of ad-hoc staff is also going on as scheduled.
“The commission is in touch with the National Peace Committee under the Chairmanship of former Head of State, Gen. Abdulsalami Abubakar (retd).
“Preparations are underway for the signing of the Peace Accord in Awka on November 4.”

Although peace accords by politicians in Nigeria have been termed political jamborees, the INEC move to undertake the same in Anambra will no doubt quell tension in a state that has witnessed an upsurge in violence in recent months.

The rising violence in the state may, indeed, not be unconnected with the election, with political actors showing preference to resolve issues through the gun rather than the ballot.

The ritual of peace accords is a welcome development even as it shows that the culture of fair play in Nigerian politics is yet to take root many years after a return to democracy due largely to lack of integrity in the electoral process.

Gunmen suspected to be bandits on October 20 bombed a portion of the Kaduna-Abuja rail track along the Dutse and Rijana areas of the state.

A former federal lawmaker, Shehu Sani, who confirmed the incident, said: “Yesterday, terrorists attacked the Kaduna Abuja railway with an explosive and opened fire on the train, targeting the Engine Driver and the Tank. This morning, I was on board when our train ran over another explosive-damaged rail track. It took a miracle for us to escape.”

The attack on the passenger train is another confirmation that bandits and other criminals in Nigeria have become more daring and should no longer be treated with a kid glove by the federal government.

It also explains why the government should not treat the call by the National Assembly and other concerned Nigerians for the declaration of the bandits as terrorists with disdain.

The train attack is a challenge to the government to wake up to its responsibility of protecting Nigerians.

QuickRead: Afenifere’s demands. Four other stories we tracked and why they matter

QuickRead: PANDEF’s position on power shift. Four other stories we tracked and why they matter