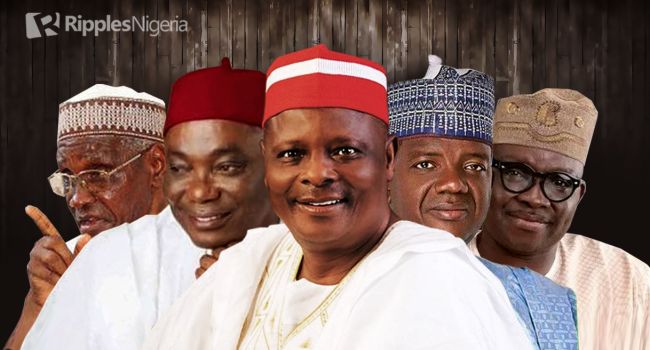 The leader of the NEF, Ango Abdullahi, had on June 27 questioned the antecedents of Atiku and Tinubu, two frontline politicians who would vie for the country’s highest political office on February 25, 2023.

He said: “We still haven’t got the man who we think will fix Nigeria. What we have on the ground is not good enough. How can you look at Tinubu and Atiku to say they are the ones who will fix this country?
“They have been on the ground for the last 25, 30 years and so on. What have they done? What are we looking for?”

The elder statesman’s remark highlights the flawed leadership recruitment process that allows the same breed of old politicians to continue to hold the ace in the country’s political space.

The consequence of this unfortunate scenario is that the country continues to be plagued by a succession of leaders who lack the ability to rise to the responsibility of the exalted positions they occupy.

The process has degenerated to the extent that Nigeria is today faced with the sad prospect of recycling leaders at various levels whose political footprints leave much to be desired.

For now, it may be safe to insinuate that individuals with deep pockets and influence, across various strata of society, will continue to dominate the political landscape while those with the required qualities are muffled by the system.

The All Progressives Congress (APC) on June 27 urged the former Kano State governor, Rabiu Kwankwaso, to return to its fold ahead of the 2023 general elections.
The party’s Deputy National Publicity Secretary, Yakubu Murtala Ajaka, made the call in a statement in Abuja.

Kwankwaso, who left the APC before the 2019 general elections, is the New Nigeria Peoples Party (NNPP) founder and 2023 presidential candidate.

Ajaka said: “Kwankwaso needs a national party like APC to achieve his presidential ambition. So, I plead with him to do the needful before it’s too late. The APC is where he naturally belongs and has an assurance of becoming a president one day, and not his current sectional NNPP.”

The recent overtures by APC to the man who left in acrimonious circumstances four years ago point to how desperate the ruling party has become in its bid to steady the ship and cling to power in 2023.

It has confirmed that politics is, indeed, an interest-driven game where past relationships no matter how good or bad are quickly put aside in pursuit of a definite goal.

It is left to be seen the manner of strategies APC will deploy to convince Kwankwaso into abandoning the NNPP, a party he formed as a Third Force to challenge the ruling party and PDP at the poll next year, and had already snatched some prominent members of the ruling party in recent months.

The Zamfara State government on June 26 asked the people of the state to obtain guns to defend themselves against bandits and other criminals terrorising the state.

The government gave the directive in a statement issued by the state’s Commissioner for Information, Ibrahim Dosara.

Read also: QuickRead: Ekweremadu’s arrest in UK. Four other stories we tracked and why they matter

The statement read: “Following increase in the activities of bandits in various parts of the state, the government has henceforth, directed individuals to prepare and obtain guns to defend themselves against the bandits.”

The government’s directive is an indication of the country’s gradual decline into anarchy.

A situation where a government directs the victims of its own failure to defend themselves against the marauders pillaging communities with reckless abandon shows a worrying and critical stage in the deterioration of the country’s security situation.

This, without doubt, is a feature of a failed state and there is no better definition that fits the country at this stage of our national life.

The former Ekiti State governor, Ayodele Fayose, on June 29 reaffirmed his commitment to a power shift to Southern Nigeria in 2023.

Fayose, who stated this on his Twitter handle, @GovAyoFayose, said it was important for power to return to the South after the eight-year rule of President Muhammadu Buhari in 2023.

He wrote: “The current President of Nigeria is a 2-term Northern Presidency, thus implying that it MUST be a Southern Presidency in 2023 or NOTHING. Awa ‘South’ lo kan’. Nigerians should await details soon.”

Despite denials by key figures in the PDP, the ex-governor’s remark confirms the suspicion that all is not well with the major opposition party with just seven months to the next general election.

The tension that trailed the nomination of Delta State governor, Ifeanyi Okowa, as the party’s vice-presidential candidate ahead of his Rivers State counterpart, Nyesom Wike, has cast a huge doubt on the party’s chances of mounting a serious challenge for the presidency next year.

Unless the disagreement that has polarized the various organs of the party, including the National Working Committee (NWC) and PDP Governors’ Forum, with different groups lining behind Wike and Atiku/the party leadership, is quickly resolved and all aggrieved parties agree to sheath their swords in the interest of the party, it is safe to say the PDP chances of regaining power next year is over even before the first ballot is cast next year.

The Federal High Court, Lagos, had on June 18 discharged and acquitted the defendant on fraud and money laundering charges filed against him by the Economic and Financial Crimes Commission (EFCC).

In its ruling, the appellate court held that the prosecution had proved its case against the defendants. The court also ordered the winding up of the companies in line with the provisions of Section 22 of the Money Laundering Prohibition Act 2021.

“The prosecution had proved the ingredients of the offence and consequently found the defendants guilty as charged.
“The lower court’s judge erred in law by dismissing the charges against the respondents,” EFCC quoted the court as saying in a statement.

The lawmaker’s conviction once again justifies the place of law in the conduct of men’s affairs.

It, indeed, signifies that nobody is above the law irrespective of his position in society.
Development such as this will not only be a deterrent to other elected public officials who may want to abuse their positions but also remind them that they will always account for their actions no matter how long it takes.

QuickRead: ISWAP attack on Kuje prison. Four other stories we tracked and why they matter

QuickRead: Ekweremadu’s arrest in UK. Four other stories we tracked and why they matter