QuickRead: Obasanjo’s worries, Jonathan’s prescriptions; three other stories we tracked and why they matter | Ripples Nigeria 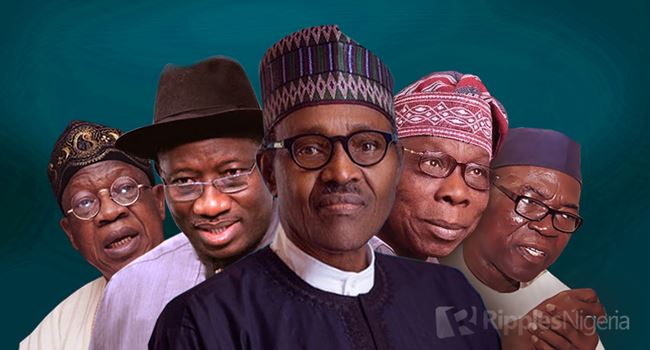 Two former Presidents of Nigeria, Olusegun Obasanjo and Goodluck Jonathan, could not hold back their thoughts on recent events in the country. While Obasanjo, though not through his usual letters rued the current situation of things in Nigeria, Jonathan harped on possible solutions to the country’s electoral woes.

These were among the five major political events of last week that drew national attention. We examine these developments closely and their import for Nigeria’s nation-building efforts.

Obasanjo, who spoke at a consultative dialogue attended by members of Afenifere, Middle Belt Forum, Northern Elders Forum, Ohanaeze Ndigbo and Pan Niger Delta Forum, said in his speech titled, ‘Moving Nigeria away from tipping over:’

“Today, Nigeria is fast drifting to a failed and badly divided state; economically our country is becoming a basket case and poverty capital of the world, and socially, we are firming up as an unwholesome and insecure country. And these manifestations are the products of recent mismanagement of diversity and socio-economic development of our country. Old fault lines that were disappearing have opened up in greater fissures and with drums of hatred, disintegration and separation and accompanying choruses being heard loud and clear almost everywhere.”

Obasanjo simply restates the obvious. With agitations all over, and daily threats to the country’s sovereignty, no soothsayer is needed to speak on the growing mistrust between and among Nigeria’s federating units.

On the country’s political landscape lies sufficient evidence of how whole groups and individuals lean on primordial sentiments of ethnicity and or religion to chase parochial interests.

When the federal character principle is not ignored, merit is thrown to the dogs, and appointments are determined by nepotistic considerations.

Hate or like Obasanjo, the import of his submissions cannot be lost. It will be too foolhardy to ignore the substance of what the former leader had said and has continued to harmer on.

The unity of the country, no doubt, is severely threatened and only an honest debate in the mould of a constitutional conference may set the tone for genuine reconciliation for peace, stability and progress.

Ex-President Goodluck Jonathan on Wednesday, August 9, harped on electoral woes in Nigeria and Africa, advising that electronic voting was needed to achieve credible elections in the continent.

The former president said: “Taking a critical examination at the way elections are conducted across the continent at least from the once I’ve observed, I’ve seen that the only way that we can get there is through electronic voting. People may feel, yes, someone could manipulate the system, get smart boys who can hack into the system and do all kinds of things, yes, but still, people use an electronic system to move hundreds of millions of dollars across the world. So, I still believe very sincerely that that is the way to go.”

Jonathan’s recommended magic wand to electoral issues has long been matter of public debate, and many are tempted to ask why he failed to implement change in the life time of his administration.

The benefits derivable from an electronic process could be legion. From the simplicity offered by automation to cost reduction, there is no gain saying the fact that a paradigm shift is bound to positively impact the integrity of Nigeria’s electoral processes.

While Jonathan gets rightly knocked, the lingering challenge is the seeming foot-drag by the Buhari administration not to give legal teeth to a legislation that would enthrone electronic voting in Nigeria.

The President is yet to find a convincing reason for sitting haplessly on the amended electoral law which recognizes the essence of the Card Reader in the electoral process. The last time Buhari volunteered an excuse for not enacting the law, he alluded to the event being too close to election day.

More than a year after, it is baffling what the excuses are or would be. A resistance to change or a frustration of the enactment of an appropriate law can only suggest that the current administration wants to reap or is reaping from a flawed set up.

He told the government officials during the first-year ministerial performance review retreat at the Presidential Villa, Abuja:

“I have charged all of you to defend the government vigorously and not allow any irresponsible and politically motivated statements to keep spreading falsehoods about this government.

“Information to the public should be better packaged, go on the offensive, we are proud of our achievements and we should blow our own trumpets.”

It is trite to expect President Buhari to charge his ministers and other government officials to defend the administration and its achievements.

However, it is hoped that public officials will not use the directive as an excuse to see views that are not favourable to the government as ‘irresponsible and politically motivated’ and then ride on them to malign and harass Nigerians.

President Buhari must see resentments as an integral process of the country’s democratic journey and resist the urge to box the citizens into an un democratic space.

If the outbursts or body language persists, then citizens should expect more critics of the administration to be hounded for their views or stance on national issues.

During the week under review, the Arewa Consultative Forum (ACF) suffered a crack with some leaders from the North-Central announcing on Wednesday, September 9, the region’s exit from the apex northern union to form a new group, the North-Central Peoples Forum.

Noting that the North-Central under ACF suffered so much from vices of kidnapping, banditry and other criminalities despite the abundant mineral and human resources in the zone, Useni said the new group would ensure the people under its forum were united in their pursuit of peace and stability within the zone.

Ordinarily, a move by a group of persons to associate or assemble should attract no untoward attention as the constitution freely guarantees such.

However, many wonder why some power brokers within the region have suddenly woken up to a realization of perceived oppression by its northern neighbours.

One possible argument could be the ongoing debate which acknowledges a deepening of the noticeable fault lines in the country.

However, there is also an informed guess that the initiators of the new bloc are simply positioning themselves ahead of the general elections in 2023.

Above all, if the new movement is purely altruistic in its objectives and goals, then the country should anticipate a hardening of the clamour for a radical restructuring of the federation which has bred more distrust than create a sense of belonging.

The Minister of Information and Culture, Lai Mohammed, at a press briefing in Abuja on Monday, September 7 said the price of petrol in Nigeria remained among the cheapest in Africa.

According to him, “Despite the recent increase in the price of fuel to N162 per litre, petrol prices in Nigeria remain the lowest in the West/Central African sub-regions… Outside the sub-region, petrol sells for N211 per litre in Egypt and N168 per litre in Saudi Arabia. You can now see that even with the removal of subsidy, fuel price in Nigeria remains among the cheapest in Africa.”

That the subsidy regimes have created more dysfunctions in the economic system is almost a settled issue. What lacks qualitative foundation, however, is the argument that the price of Nigeria’s fuel is the cheapest in Africa.

The minister cleverly sidetracks the fact that Nigeria is the poverty capital of the world, making its citizens among the most impoverished human beings on earth.

He also refuses to acknowledge that Nigeria, with one of the lowest minimum wages in the world, has most of its citizens living in penury.

Lai’s skewed analysis also relieves the culture of doublespeak by most Nigerian politicians who are quick to switch positions as conditions permit.

Lai is reminded that in 2012, as the publicity secretary of the defunct Action Congress of Nigeria (ACN), he had criticised the administration of former President Goodluck Jonathan’s planned removal of subsidy.

He had then called on the National Assembly and organised labour to stop subsidy removal, saying “ACN…remains convinced that fuel subsidy removal is not in the interest of Nigerians…”

Nigerians should anticipate more of Lai’s kind of commentaries in the weeks and months ahead, as the government enforces more austerity measures.

You can criticize but not insult clerics, Apostle Suleiman tells Daddy Freeze